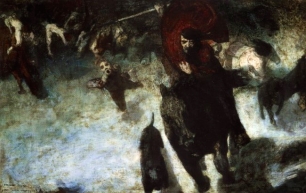 The Huntsman arrives on a great horse, accompanied by hellhounds, wolves, and ravens—creatures that take delight in death and destruction. He leads the Wild Hunt through the darkness of autumn and winter, during which the Hunt’s approach might be mistaken for the baying of winds and galloping of storms.

As Christianity became entrenched in Europe, the Huntsman was more likely to be described as the devil or some other kind of dark specter than a pagan god or goddess. In medieval times, the Huntsman was sometimes identified as a localized huntsman figure like King Arthur (England and Brittany), Herne the Hunter (England), Charlemagne (France), Hellequin (France), Count Arnau (Catalonia), or Hans von Hackelbernd (Germany). There are even tales of Sir Francis Drake leading the hunt.

The Wild Hunt (2012) by Yoann-Lossel at DeviantArt

While the Wild Huntsman leads the ghostly band, the hunting party constitutes a group of spirits, faeries, or elves doomed to ride with the Wild Hunt ‘til the end of days. The train of the Wild Hunt is made up of dead souls.

According to Irish and Scottish folklore, the Sluagh Sidhe are part of the Wild Hunt. The Sluagh are spirits of the restless dead, rejected by the afterworld. When these destructive spirits are on the Wild Hunt they attempt to steal the souls of the dying. The Sluagh are haggard and thin, with leathery wings, bony claws, and pointed teeth protruding from a beak-like mouth.

The Wild Hunter (1920) by Erich Ebstein, in GA Bürger Ballads

The Wild Hunt is also known as Woden’s Hunt, the Raging Host, Gabriel’s Hounds, Asgardreia, Cŵn Annwn, and Mesnée d’Hellequin. Though accounts of the Wild Hunt are well-known in European lore, there are comparable chases in other parts of the world.

In North America, similar phenomena are referred to as Ghost Riders. In the American story “The Legend of Sleepy Hollow,” the Headless Horseman is modeled after the Dullahan, a harbinger of death often associated with the Wild Hunt. Similar tales can be found outside of the Western traditions. The Puranas, ancient Hindu holy texts, describe how the god Shiva would hunt sinners while mounted on the back of a bull, accompanied by a warrior band of ghosts.

The object of the Wild Hunt could be a wild horse, a visionary boar, a maiden, a wood nymph, the soul of the dying, or an unlucky victim who happens to find himself exposed as the Hunt sweeps past. In parts of Britain it’s believed that the hellhounds of the Wild Hunt chase unbaptized infants and sinners. In Norse and Welsh mythology the dying and dead are hunted in order to deliver them to the afterlife. Many believe that the Wild Hunt foretells death, disaster, or war. German folklorist Jacob Grimm popularized the term the term Wilde Jagd (“Wild Hunt”) through his 1835 book Deutsche Mythologie.

Defense Against the Wild Hunt

Upon finding oneself alone in a forest or moor with the sounds of horn, hounds, and hooves approaching, it’s believed that there are ways to avoid being taken by the hunt. Though there’s no hiding from the Wild Hunt, they are sometimes willing to trade. Those who have attracted the attention of the hunt may be spared if they’re willing to sacrifice another in their stead. 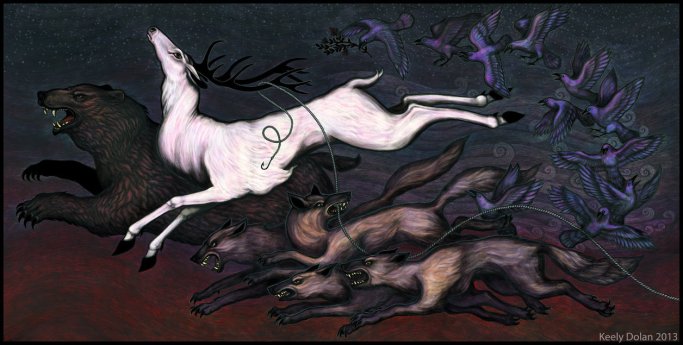 The Wild Hunt (2013) by Lyekka at DeviantArt

A huntsman may offer the leg of a slain animal, but it will be cursed. Rather than outright refuse the offer, however, ask for salt to go with the leg. Since the Hunt cannot carry salt, they will not be able to serve the cursed leg.

Some travelers carry a piece of bread and a piece of steel at all times. Throwing the steel at Wöden may keep him at bay, but if the Hunt does approach, the dogs may be distracted with the bread. Gaelic tradition cautions that in houses of the sick or the dying, west-facing windows and doors should be kept closed because the Sluagh of the Wild Hunt fly in from the west.

The Wild Hunt in Popular Culture

The Wild Hunt is featured throughout many modern fantasy novels.

Accounts of the Wild Hunt have terrified people for centuries. The Hunt was reportedly heard going through the English countryside on Halloween night as recently as the 1940s. For the unlucky soul wandering alone in the pine forests of Scandinavia or the moors of Britain, beware the howl of hounds and the thunder of hooves, for Wōden and his spectral horde may soaring through the skies overhead.

15 thoughts on “Monster of the Week: The Wild Hunt”