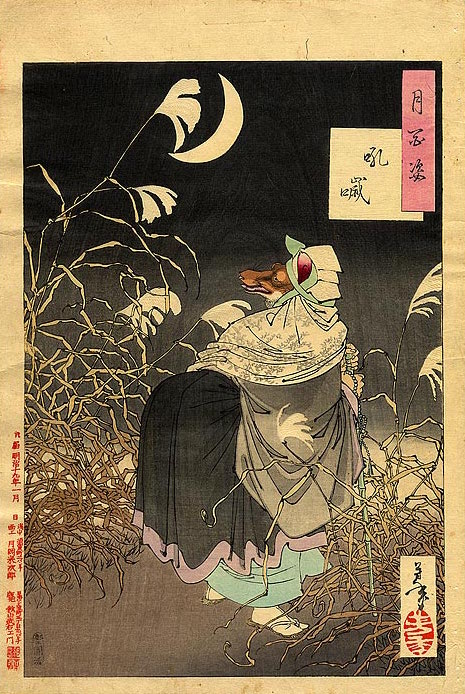 A long time ago there was a man who had three sons but no daughter. It was his dearest wish to have a daughter, so he went up into the mountains and prayed to the spirits. One night, after months of prayer, he was so desperate he said, “Please, Hannanim, give me a daughter—even if she is a fox!”

Soon the man’s wife discovered that she was pregnant, and in time she bore a beautiful girl. The man was happy. But when the daughter was about six years old, strange things began to happen. Every night a cow would die, and in the morning they could never find a trace of what had killed it. So one night the man told his first son to keep watch.

In the morning, the first son told a terrible story of what had happened. “Father, I could not believe my own eyes,” he said. “It is our little sister who is killing the cattle. She came out in the middle of the night and I followed her to the cattle shed. By the moonlight I could see her as she did a little dance. Then she oiled her hand and her arm with sesame oil. She shoved her whole arm into the cow and pulled out its liver. She ate it raw while the cow died without a sound. That is all I saw, father, for it was too horrible to witness any longer.”

The father was outraged. “That is not possible,” he said. “Tell me the truth.”

“That is the truth, Father.”

“Then you must have had a nightmare. That means you have betrayed my trust by falling asleep when you were supposed to keep watch. Leave my sight at once! You are no longer my son!” And so he threw out his eldest son.

Now it was the second son’s turn to keep watch. Everything was fine for a month, but then when the full moon came around the same thing happened, and in the morning he made his report to his father.

“That is not possible,” said the father. “Tell me the truth.”

“That is the truth, Father.”

“Then you must have had a nightmare. That means you have betrayed my trust by falling asleep when you were supposed to keep watch. Leave my sight at once! You are no longer my son!” And so he threw out his second son.

Finally it was the youngest son’s turn to keep watch over his sister, and once again, everything was fine for a month. When the full moon came around, the same thing happened, but having seen the fates of his older brothers, the youngest son lied.

“Father,” he said. “Our little sister came out in the middle of the night and I followed her to the outhouse. She made water and came out again. As I passed by the cattle shed in the moonlight I saw that a cow had died. It must have been frightened by the full moon.”

“Then you have done your duty as a son should,” said the father. “You shall inherit my lands when I have gone to join our ancestors.”

Meanwhile, the first two sons were no more than beggars wandering the countryside. Eventually they had both come to the top of a mountain where an old Buddhist master took them in. They studied diligently with him until eventually their hearts grew sore to see their home again. After a year they decided to return to their village for a visit. The old master made the two brothers a gift of three magic bottles: one white, one blue, and one red. “Use these as I have instructed,” he told them, “and you shall be able to defeat any foe—even that sister of yours, who is surely a fox demon!”

The brothers thanked the old monk and returned to their village only to find it entirely deserted. When they reached their house they found the roof in terrible disrepair and the yard overgrown with weeds. Inside, the paper panels on the doors were all in tatters. They found their sister all alone.

“They all lie in their graves,” she replied, giving no explanation for their deaths. But the brothers knew why. “I’m all alone now,” she said. “Brothers, won’t you stay with me?”

“But it’s nearly dark,” said the sister. “Won’t you at least stay the night?”

They reluctantly agreed, and somehow the sister prepared them a fabulous meal with wine that night. They were suspicious, and they planned to take turns keeping watch through the night, but they had been so hungry during their year of poverty that they ate and drank their fill, and soon they were fast asleep. In the middle of the night the older brother awoke suddenly with a full bladder. He thought his younger brother was still eating—it sounded like someone chewing—so he turned over in annoyance to tell him to stop. In the moonlight he could see the table still in the room, their leftovers strewn about. But instead of white rice, what he saw were maggots. Instead of wine, there were cups of blood. Instead of turnip kimchi, there were severed human fingers. He sat up in horror, realizing what he had eaten, and then he saw what was making the noise—it was his sister, straddling his dead brother’s body, chewing on his bloody liver.

“Did you sleep well, dear oldest brother?” she said. “I need only one more, and then I will be a human being.” 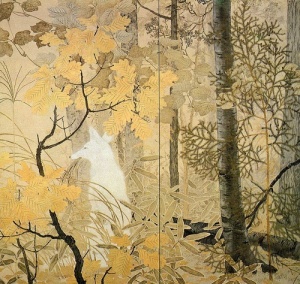 The oldest brother leapt from his sleeping mat and ran out of the house. He was still groggy from the enchanted food, and he stumbled and staggered as he ran down the road in the moonlight. Soon his sister gave chase, and she easily caught up to him. Remembering the old Buddhist monk’s instructions, the brother took the white bottle and threw it behind him. Suddenly, in a puff of smoke, a vast thicket of thorn bushes blocked the sister’s way. She was trapped for a moment, but then she changed into her original form—that of the fox—and easily escaped. In a short time she had caught up to him again. This time the brother took the blue bottle and threw it behind him. There was a loud splash, and a vast lake appeared. Once again the sister was trapped. She struggled to swim, but then she changed into the fox again and easily paddled ashore.

The oldest brother was exhausted and terrified. He could run no more. He took the red bottle and he flung it at the fox, saying, “Ya! Take that!” There was a blinding flash of light, and the fox was engulfed in a ball of fire. She burned to death, screaming, and when there were only ashes left a small, whining insect flew out. And that is how the first mosquito came into the world. And that is why both the fox and the mosquito are afraid of grass fires.

Return to Monster of the Week: Kumiho