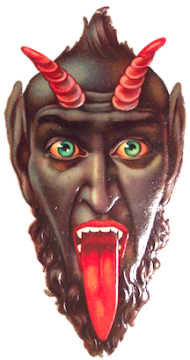 The Krampus is a yuletide monster of Alpine lore. He is one of the helpers of St. Nicholas, seeking out naughty children on Krampusnacht, the eve of St. Nicholas’ Day (December 6). He acts as the anti-St. Nick, frightening, and sometimes punishing—or even abducting—badly behaved children.

The Krampus, whose name likely derives from krampen, the Old High German word for claw, is of mostly humanoid form, though exceptionally furry, similar to a satyr. He has large, pointy ears, a bull’s tail, and big goaty horns. The Krampus has one normal foot and one cloven hoof, but his most distinguishing characteristic may be his huge red tongue, which perpetually lolls out of his mouth. Krampus will often carry a large sack in which to haul away bad children, though sometimes a washtub, basket or other conveyance is used. Along with a sack, his accoutrements often include chains, bells, and a ruten (a birch-twig switch) or whip.

The Companions of Saint Nicholas

Although Nicholas of Myra, or Nikolaos the Wonderworker, is an early Christian saint, the legendary figures known as companions of St. Nick virtually all have pre-Christian origins as yuletide or winter solstice visitors, Krampus being among the scariest of them. There are many “dark helpers” of St. Nick across Europe and other areas around the world where clustered European groups have settled. The friends of St. Nicholas vary throughout the Alpine countries and may change from village to village. Some of the companions that, like the Krampus, serve as punishers and “bad Santas” include France and southern Belgium’s Père Fouettard (Father Whipper), the German and Pennsylvania Dutch figure Belsnickel, the Prussian Knecht Ruprecht, Switzerland’s Schmutzli (Little Dirty One), and the Teutonic Frau Perchta the Belly-slitter. Many of these characters in certain local traditions are indistinguishable from Krampus in behavior and appearance.

… Krampus, or, “the Krampus,” is sometimes known as “The Christmas Devil” and like Satan, he is the dark, demonic, disturbing opposite of holy light. But the Krampus tradition does not represent the struggle between good and evil. Traditionally, Krampus is kind of a companion to St. Nicholas, not his adversary. Think of him as Santa’s enforcer.
—Kate Wolford, Krampusnacht: Twelve Nights of Krampus, 2014

The antics of the Krampus and the other characters of pagan origin mentioned above often involve beating, swatting and slapping—though originally perhaps not as punishment, but as a way to awaken the life force of both people and plants. The bells and rattling chains that Krampus wears also evoke the yuletide noisemaking of the winter solstice mummery that has been practiced in Europe for millennia.

The Krampuslauf, or Krampus Run, is an Austrian yuletide tradition dating back hundreds, if not thousands, of years. On Krampusnacht, usually after dark in the light of bonfires and often under falling Alpine snow, young men dressed up as Krampusse enact a festival parade in which they lurch about, ringing their loud bells, flailing their stinging switches, and causing part fright and part delight in the assembled spectators both young and old. At the end of the Krampuslauf, parade barriers are taken down and parents are entreated to take their children home before the Krampusse take over the streets and taverns of the village to celebrate the completion of their annual task. 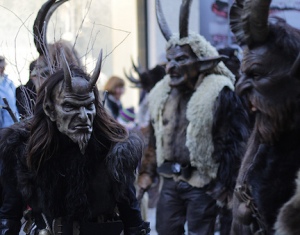 Although the Krampus was virtually unknown in the United States up until the 21st century, the festive spectacle of Krampuslauf has begun to become popular in various American cities over the past several years. Burlington VT, Philadelphia, and Los Angeles are among the cities that have held Krampus Runs, though few have them on Krampusnacht (December 5), and some are held in conjunction with SantaCon, a shambolic holiday celebration that originated in San Francisco in 1994 and has since spread throughout the US and beyond.

The Krampus in Popular Culture

Supernatural: The Supernatural episode “A Very Supernatural Christmas” (S03E08) discusses Krampus as a suspect in some Christmas-related killings. According to Sam’s lore research, Krampus walks with a limp (not surprising, with one human foot and one animal hoof!) and smells of sweets. At first the Winchesters surveil the drunk Santa of an insalubrious Holiday Village whom Dean calls “Saint Nicotine.” Although the actual Monsters of the Week turn out to be pagan Yule gods, Krampus, or as Sam calls him, “Anti-Claus,” is discussed throughout. With both a special opening title card and flashbacks to the brothers’ childhoods, this episode is a holiday favorite. 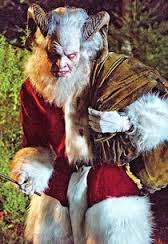 Grimm: “Twelve Day of Krampus” is the name of the eighth episode of Season 3 of Grimm. The episode features a particularly frightening Krampus in a Santa suit who kidnaps naughty children (usually Christmas shopper-robbing teens), stuffs them in his sack, and takes them to the woods with plans to eat them all on Krampusnacht.

Only the most intractable of wicked children are likely to actually be spirited away by the Krampus, yet for the mildly bratty a smack from his birch switch may still be inevitable, especially in the Alps. The best defense against Krampus is, of course, to not engage in naughtiness throughout the previous year. Grüß vom Krampus!

2 thoughts on “Monster of the Week: The Krampus”