In “Ghosted” Teen Wolf introduces us to the creepy town of Canaan. While the seniors check out what appears to be an uninhabited community, the sophomores stir up trouble back n Beacon Hills. And it’s not just the teens taking drastic actions in “Ghosted.” 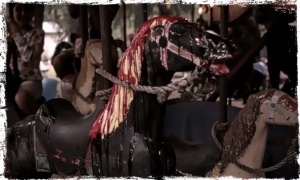 Lydia has a vision of the decimated town of Caanan, leading Malia to ask “Don’t you ever have nice dreams.” Being a Banshee seems to have very little upside. In Lydia’s vision of 1987 Canaan the ladies are sporting side ponytails and a boombox plays “Hungry Like the Wolf.” This flashback wasn’t quite how we remember the ‘80s, except for the bloody carousel horses.

The destruction we see in Canaan is what Beacon Hills has to look forward to. We can’t help but wonder how no one has noticed this weird town where pretty much everyone disappeared in 1987. Even in Limetown the outside world knew something weird happened there. Were there no investigative reporters in the vicinity of Canaan back in the 1980s?

It turns out that Lydia has her own fate to look forward to if Beacon Hills is cleared by Ghost Riders. She will be left behind to suffer alone. It’s a banshee thing that we won’t pretend to understand. We can only assume that banshees are immune to the powers of the Wild Hunt and are unable to leave town without friends to help move their furniture. Or maybe they just get kinda nuts in middle age and not even Ghost Riders want to deal with them. The middle-aged banshee they meet in Canaan has conjured up her dead son for company. The dead son added a bit of suspense when he tried to drown Malia and Scott, but mostly served to emphasize the strange realities created when the Ghost Riders come to town.

Oh, by the way, the best part of the whole episode took place in Canaan. Was it when Malia faced a hallucination of Theo killing her and her family? Was it when the two powerful banshees wailed at each other? Was it when the creepy dead boy locked the two shapeshifters in the basement? No, it was none of these. It was when Malia drank down the nasty lemonade the crazy banshee lady offered. That were-coyote is hilarious. 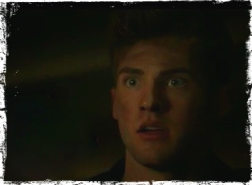 We’re at the point in the season when old faces return and faith gets placed in the wrong people. It’s not Dr. Valack or Gerard Argent making an unexpected appearance this season, but Theo Raeken. Liam convinces Mrs. Yukimura to lend him Kira’s sword so he can release Theo from the underground. Liam’s early attempt at leadership seems a bit rash, but when you’ve got the loyal support of your sophomore crew any misguided notion can seem like a great idea.

Not only do they bring Theo on board, Mr. Douglas, aka green slime Nazi Werewolf, has joined their crew. He had the notion about getting an electricity conductor, which helped to facilitate Theo’s return. Even though Theo hints that he knows Mr. Douglas’s true identity, we don’t think there’s any scheming going on between these two. They both just happen to be former best buds of the Dread Doctors. We know that Theo is motivated by access to fresh air, but it’s not clear what Mr. Douglas wants from this little science club. We expect to find out soon.

While Scott searches a ghost town, his mother is back in Beacon Hills trying to save Chris Argent. We’re not sure how we feel about this coupling. Perhaps the writers felt it was time to give Mrs. McCall a little romance in the final season of Teen Wolf, but realized Sheriff Stilinski was unavailable. He’s too busy pulling back the wallpaper at his house, and being married to his dead wife. The Sheriff and Nurse McCall felt like a natural connection, while this feels a little more forced. But let’s not begrudge the grown-ups their own storyline. Who knows if it will actually become romantic, but it’s fun to see Melissa McCall going to town with those herbs in order to save Chris Argent’s life.

“Ghosted” won’t go down as one of Teen Wolf’s best, but it was a solid episode. We learned that the Ghost Riders can destroy a town if they are stuck there for awhile. It was made clear that the dead can be conjured to fill a void. Most importantly, we learned that Theo is available anytime for consultation via kitsune sword. Teen Wolf likes nothing more than to move the moral compass with existing characters, so there’s still a great deal to be revealed.