Once upon a time there was an old couple. The husband lost his wife and married again. But he had a daughter by the first marriage, a young girl, and she found no favor in the eyes of her evil stepmother, who used to beat her, and consider how she could get her killed outright. One day the father went away somewhere or other, so the stepmother said to the girl, “Go to your aunt, my sister, and ask her for a needle and thread to make you a shift.”
Now that aunt was a Baba Yaga. Well, the girl was no fool, so she went to a real aunt of hers first, and says she:
“Good morning, Auntie!”
“Good morning, my dear! what have you come for?”
“Mother has sent me to her sister, to ask for a needle and thread to make me a shift.”
Then her aunt instructed her what to do. “There is a birch-tree there, niece, which would hit you in the eye—you must tie a ribbon round it; there are doors which would creak and bang—you must pour oil on their hinges; there are dogs which would tear you in pieces—you must throw them these rolls; there is a cat which would scratch your eyes out—you must give it a piece of bacon.”
So the girl went away, and walked and walked, till she came to the place. There stood a hut, and in it sat weaving the Baba Yaga, the Bony-shanks.
“Good morning, Auntie,” says the girl.
“Good morning, my dear,” replies the Baba Yaga.
“Mother has sent me to ask you for a needle and thread to make me a shift.”
“Very well; sit down and weave a little in the meantime.”
So the girl sat down behind the loom, and the Baba Yaga went outside, and said to her servant-maid:
“Go and heat the bath, and get my niece washed; and mind you look sharp after her. I want to breakfast off her.”
Well, the girl sat there in such a fright that she was as much dead as alive. Presently she spoke imploringly to the servant-maid, saying:
“Kinswoman dear, do please wet the firewood instead of making it burn; and fetch the water for the bath in a sieve.” And she made her a present of a handkerchief.
The Baba Yaga waited a while, then she came to the window and asked:
“Are you weaving, niece? are you weaving, my dear?”
“Oh yes, dear aunt, I’m weaving.” So the Baba Yaga went away again, and the girl gave the Cat a piece of bacon, and asked:
“Is there no way of escaping from here?”
“Here’s a comb for you and a towel,” said the Cat; “take them, and be off. The Baba Yaga will pursue you, but you must lay your ear on the ground, and when you hear that she is close at hand, first of all throw down the towel. It will become a wide, wide river. And if the Baba Yaga gets across the river, and tries to catch you, then you must lay your ear on the ground again, and when you hear that she is close at hand, throw down the comb. It will become a dense, dense forest; through that she won’t be able to force her way anyhow.”
The girl took the towel and the comb and fled. The dogs would have rent her, but she threw them the rolls, and they let her go by; the doors would have begun to bang, but she poured oil on their hinges, and they let her pass through; the birch-tree would have poked her eyes out, but she tied the ribbon around it, and it let her pass on. And the Cat sat down to the loom, and worked away; muddled everything about, if it didn’t do much weaving. Up came the Baba Yaga to the window, and asked:
“Are you weaving, niece? are you weaving, my dear?”
“I’m weaving, dear aunt, I’m weaving,” gruffly replied the Cat.
The Baba Yaga rushed into the hut, saw that the girl was gone, and took to beating the Cat, and abusing it for not having scratched the girl’s eyes out. “Long as I’ve served you,” said the Cat, “you’ve never given me so much as a bone; but she gave me bacon.” Then the Baba Yaga pounced upon the dogs, on the doors, on the birch-tree, and on the servant-maid, and set to work to abuse them all, and to knock them about. Then the dogs said to her, “Long as we’ve served you, you’ve never so much as pitched us a burnt crust; but she gave us rolls to eat.” And the doors said, “Long as we’ve served you, you’ve never poured even a drop of water on our hinges; but she poured oil on us.” The birch-tree said, “Long as I’ve served you, you’ve never tied a single thread round me; but she fastened a ribbon around me.” And the servant-maid said, “Long as I’ve served you, you’ve never given me so much as a rag; but she gave me a handkerchief.” 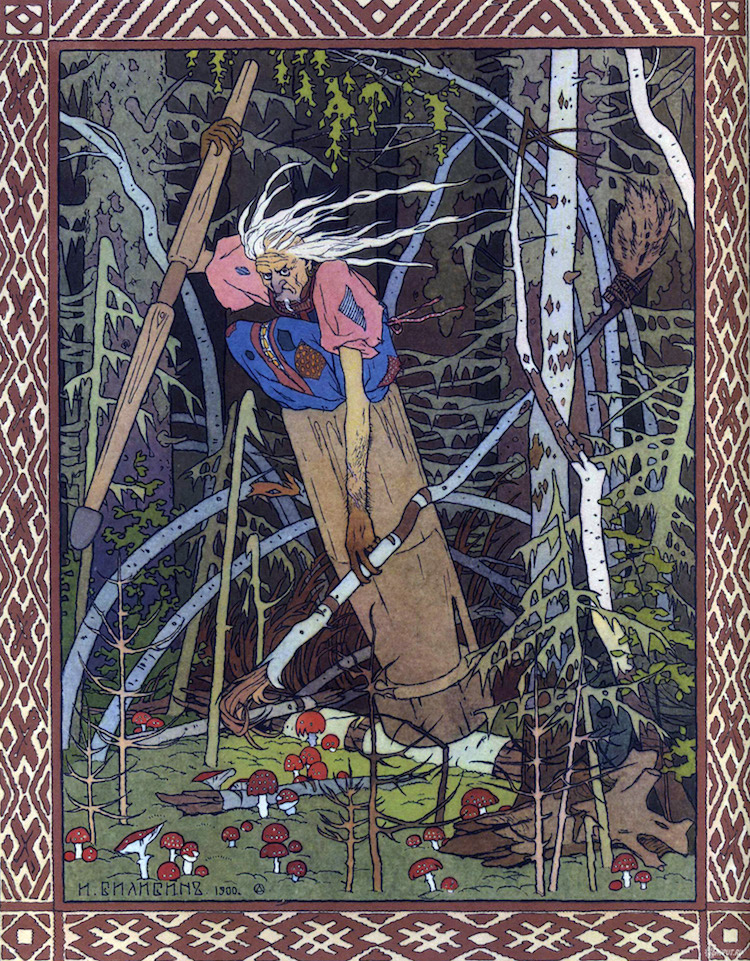 The Baba Yaga, bony of limb, quickly jumped into her mortar, sent it flying along with the pestle, sweeping away the while all traces of its flight with a broom, and set off in pursuit of the girl. Then the girl put her ear to the ground, and when she heard that the Baba Yaga was chasing her, and was now close at hand, she flung down the towel. And it became a wide, such a wide river! Up came the Baba Yaga to the river, and gnashed her teeth with spite; then she went home for her oxen, and drove them to the river. The oxen drank up every drop of the river, and then the Baba Yaga began the pursuit anew. But the girl put her ear to the ground again, and when she heard that the Baba Yaga was near, she flung down the comb, and instantly a forest sprang up, such an awfully thick one! The Baba Yaga began gnawing away at it, but however hard she worked, she couldn’t gnaw her way through it, so she had to go back again.
But by this time the girl’s father had returned home, and he asked:
“Where’s my daughter?”
“She’s gone to her aunt’s,” replied her stepmother.
Soon afterwards the girl herself came running home.
“Where have you been?” says her father; “and why are you so out of breath?”
The stepmother turned yellow when she saw her, and her eyes glowed, and her teeth ground together until they broke.
But the little girl was not afraid, and she went to her father and climbed on his knee, and told him everything just as it had happened. And when the old man knew that the stepmother had sent his little daughter to be eaten by Baba Yaga, he was so angry that he drove her out of the hut, and ever afterwards lived alone with the little girl. Much better it was for both of them.

Return to Monster of the Week: The Baba Yaga