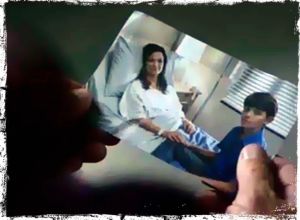 In “Blitzkrieg,” the Ghost Riders are conducting a sustained attack on the town of Beacon Hills. As most the town gets picked off, we start to wonder—is this how Teen Wolf is going to end? Will everyone eventually be cast into oblivion, or at least an oblivion-like train station? At first we think, “Oh, Lord, don’t let it end in a train station.” Then we realize that leaving Beacon Hills completely empty, except for a lone banshee living in Eichen House, would kind of be an amazing ending for the Teen Wolf series. And then they all lived as Ghost Riders forever …

Ending Teen Wolf with most of Beacon Hills traveling through the skies amongst The Wild Hunt may yet be averted. To start with, Sheriff Stilinski finds a piece of red yarn that begins to unravel his own reality. Even though Beacon Hills is quickly becoming a ghost town, we find that Peter, Malia, Scott, Lydia and Liam have managed to stay out of the Ghost Riders’ grasp. Scott has a half-assed plan to bite Stiles and take him through the rift, but Peter, always so helpful, is quick to point out the flaws in his plan.

Sheriff Stilinski isn’t the only grownup still in town (Peter Hale doesn’t count as a grownup, even if he is supposedly Malia’s biological father). Melissa McCall and Chris Argent are following some kind of mystery supernatural trail that leads to the dead Ghost Rider. Mrs. McCall can’t wait to stick her fingers in his brain to confirm a lack of pineal gland. Scott, maybe fill your mom in once in a while. They find themselves facing Mr. Douglas the Nazi Werewolf, who is eager to find a Hellhound. Melissa McCall agrees to help in order to keep Chris Argent safe. She then hugs him in an overly familiar way. MTV is putting a rush on this relationship, and we’re not feeling it. Though if it eventually becomes a complicated love triangle between Chris Argent, Melissa McCall, and Noah Stilinski, we could definitely get on board. Don’t be haters; the old folks deserve a lifetime moment, too.

It turns out that the sophomores have also survived—at least the important ones. Hayden comforts Mason as he pines over Corey, who was recently zapped into train station oblivion by Mr. Douglas. The supernatural crew doesn’t seem to have as much trouble remembering the disappeared as they used to.

The Löwenmensch and the Dread Doctors

Liam, Mason, and Hayden meet at the abandoned sheriff station so they can taunt the locked-up Theo. They realize that Mr. Douglas knows all about the Wild Hunt. Theo helpfully adds, “And guess who knows all about Mr. Douglas?” We love how they still refer to him like he’s a teacher, when he’s actually a Nazi werewolf. Theo tries to negotiate a deal with little leader Liam. Theo, who murdered a couple of BHHS students last season, as well as his sister, asks Liam to break the sword so he can’t be sent back to Hell. Liam agrees to destroy his only bargaining chip in order to learn more about their mysterious Aryan teacher. We sure wouldn’t want to be the ones to tell Mrs. Yukimura that her family heirloom was broken so a child killer could feel a little more at ease. She will be one p.o.’d kitsune.

Theo reveals that Mr. Douglas is a Löwenmensch, which Mason helpfully explains is a part-wolf, part-lion creature. Hauptmann Douglas was part of a Nazi team that chased down the Wild Hunt back in 1943, finding the same rift that Scott found earlier. The Ghost Riders attack the soldiers and Mr. Douglas gets whipburn that just won’t go away, so he goes to the Dread Doctors for help. Instead, they put him in a specimen jar, where his whip wound infects the water he’s immersed in. This means that over the 70 years that the Dread Doctors draw out the infected water for their experiments, Douglas is able to absorb power though the water. Though we’re barely managing to follow Theo’s explanation, Mason is quick to leap to the conclusion that Mr. Douglas wants the Wild Hunt for his own personal supernatural army. That does sound kind of cool.

Chris Argent and Melissa McCall bring Mr. Douglas to the Argent bunker, where Deputy Parrish is sleeping it off in the fridge. The Ghost Rider first takes Argent, then Mrs. McCall, and then commands Parrish to wake up with some German mumbo jumbo. BTW, for such a girl-power show, Mrs. McCall was doing a lot of standing around and looking helpless in this episode. Couldn’t she manage to pick up a gun or open the fridge on her own? 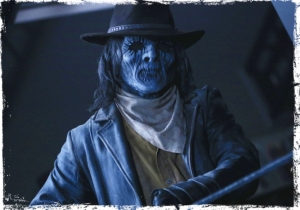 The Ghost Riders come for the rest of the sophomores. First they take Mason, and then they get a hold of Hayden. Liam can’t seem to save her, but they share an emotional moment. We’re almost moved, even though we still kind of hate Hayden because she was a mean girl all last season.

Scott finally finds a clue. They realize that train station oblivion is underground after coming across a spooky pipe. Isn’t that a season 3 spooky pipe? Admittedly, Beacon Hills is full of underground tunnels, bunkers, and substations, so who knows.

Lydia, Malia, and Scott find the rift and realize it’s all burn-y. Lydia suggests that there’s got to be another way. Maybe the supernatural rift just needs a banshee scream to break the barrier. We’ll never know, because Mr. Douglas shows up with Hellhound Parrish at his heel.

Meanwhile, something real is happening at the Stilinski house. And by real we mean some real good acting by Linden Ashby, who breaks our hearts. Claudia Stilinski comes to the door where her husband has been reconstructing Stiles’ room. He tells her, “Claudia, we have a son. And we have to find him and get him back.” He shows Claudia the room, but she can’t see it. When she tells him, “Noah, there’s nothing here,” he responds, “You’re here.” Ooh! We just got chicken skin.

In the tunnels, Mr. Douglas tries to convince Scott that they can work together, that they all want the same thing. Malia, as always, is the voice of reason, pointing out he is the bad guy.

Mr. Douglas: “Good guy. Bad guy. When has anything ever been so black and white?”
Liam [running into the tunnel]: “World War II. He’s a Nazi.”

This may be the best retort we’ve ever heard on Teen Wolf. They throw down, but Parrish opens the rift and he and Douglas walk in. If that wasn’t bad enough, two Ghost Riders walk out. Ruh Roh.

Meanwhile, Sheriff Stilinski is having an epiphany. He realizes he can’t remember celebrating any recent birthdays, anniversaries, or vacations with his wife. He shows her the picture he took of her and Stiles on her last good day at the hospital. Claudia keeps insisting that no, she got better.

Stilinski: “You were yourself all day. Stiles had his mom back and I … I had my wife back.”
Claudia: “The medication had started to work.”
Stilinski: “Stiles couldn’t stop talking about school, all the trouble he’d gotten into. He tried so hard to stay awake. When he finally fell asleep, it was in your arms.”
Claudia: “The doctors couldn’t explain it. We started making plans, started dreaming again.”
Stilinski: “We just sat together and watched each other. We didn’t need to talk. But, when you finally closed your eyes …”
Claudia: “I was myself again.”
Stilinski: “I knew you were gone.”

When he looks up, she has disappeared. And we can barely breathe through all the weeping. These Teen Wolf writers know how to showcase the actors’ best talents. We were a little rough on Claudia, back when we thought she was a ghoul. Now that we know she was conjured out of thin air in response to Sheriff Stilinski’s longing, we kinda miss her. And we’ll always be grateful to her for clueing us into the fact that the Sheriff’s first name is Noah.

Down in the tunnels, Liam and Lydia head towards the Argent bunker, while Scott and Malia get into it with the Ghost Riders. Despite their attempts to flee, Liam and Lydia find a Ghost Rider waiting for them. The rider puts down his gun and does nothing when he sees Lydia. Liam notes, “He’s afraid of you,” to which Lydia responds, “I’m afraid of me.” She forgot to say ‘girl’ at the end of her sentence, but we get you, girl. Scott and Malia are saved by Peter, which seems to indicate he has some kind of paternal feelings. Or he really misses that train station.

Back at home, Scott realizes his mom is gone. The Ghost Riders can no longer be bothered to obliviate anyone, as they are too busy emptying the town. But it turns out that Scott, Lydia, Liam, and Malia aren’t the only major characters left in Beacon Hills. Sheriff Stilinski arrives, telling them, “I have a son. His name is Michislav Stilinski. But we call him Stiles.” Not only did the Sheriff remember Stiles, he caught a glimpse of his son for a moment. The gang realizes that remembering Stiles may help them to open the rift.

Holy Moly. A few episodes ago, we learned that the Sheriff has a first name, and now, after six seasons, Teen Wolf reveals Stiles’ real name. Sh*t just got real. For the first time, it really hits us that Teen Wolf is coming to a final close this season. At the end of “Blitzkrieg,” Sheriff Stilinski reminds us all, “We’re here tonight because my goofball son decided to drag Scott, his greatest friend in the world, into the woods to see a dead body.” We couldn’t have said it better ourselves, Noah.