In Hawaiʻi, the name Pele evokes images of molten lava, flame, and boiling oceans. Pele is a powerful and volatile creator, known as Pelehonuamea (“Pele of the sacred land”) and ka wahine ʻai honua (“the woman who devours the land”). Through her destructive power, Pele is responsible for creating and shaping the landscape of the Hawaiian Islands in an ongoing cycle of devastation and regeneration.

Born in Tahiti, Pele was one of six daughters and seven sons born to Haumea and Moemoea. Pele became very beautiful, with long, flowing black hair. There are several explanations as to why she left her homeland: banishment for her fiery temper, a desire to travel, and a quarrel with her sister Nāmaka. Her brother Kamohoalii, king of sharks, brought Pele and her siblings to the Hawaiian Islands in the canoe Honuaiakea, landing first on Niʻihau. On Kauaʻi, Pele was attacked by her jealous sister Nāmaka, who had followed her from Tahiti. Pele survived and made her way through the Hawaiian Islands. On each island, Pele created a fire pit with her oʻo (digging stick) to protect the sacred fire she carried with her, but every time Nāmaka, goddess of the sea, flooded the pit with water. The final battle between Nāmaka and Pele was on Maui, where Pele was torn apart. Her spirit escaped to the island of Hawaiʻi and Pele found a home for the sacred fire on Mauna Loa, safe from the waters of Nāmaka.

The Goddess of Volcanoes

Pele is revered in Hawaiian culture as the goddess of fire, lightning, wind, and volcanoes. The summit of Kīlauea, the world’s most active volcano, is where Pele makes her home, inside Halemaʻumaʻu crater. When visiting Pele’s doorstep, traditional offerings include prayer, lei, chants, and hula, as well as food such as pork, red fish, or banana wrapped in ti leaves. ʻOhelo berries are considered sacred to Pele. Traditionally, prayers and offerings to Pele are made before eating the berries. 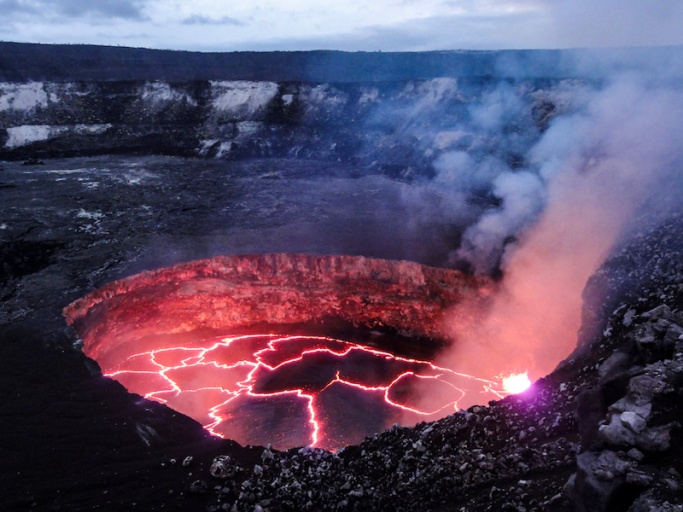 Pele continues to expand and sculpt Hawaiʻi through the current eruptions on the Big Island. Kīlauea Volcano has been continuously erupting since 1983, with active vents at Halema‘uma‘u crater and the lower East Rift Zone. The current eruption of Kīlauea has added nearly 500 acres of new land to Hawaiʻi Island. Other active volcanoes in the Hawaiian Island chain include Mauna Loa, which last erupted in 1984, and Lō‘ihi, a volcano erupting from the ocean floor. Through the volcanic chain that runs from Niʻihau to Hawaiʻi Island, Pele helped to create the Hawaiian Islands.

Signs of Pele can be found on volcanic cones and lava flows. One form of lava is known as “Pele’s hair,” thin strands of volcanic glass. Lava fountains can shower a cascade of hot molten droplets that fuse into drops of volcanic glass known as “Pele’s tears.” The interaction between lava and the water can also create Limu o Pele: thin, brownish-green sheets of lava that resemble seaweed.

Pele’s curse claims that those who take lava rocks away from the islands will suffer bad luck until they are returned. Though this legend may have originated within the ranks of the park service, every year hundreds of visitors end up mailing packages of rock, sand, and other natural elements back to Hawai’i after experiencing misfortune upon their return home.

Pele’s presence is strongly felt at the volcano, where she can occasionally be seen. Photos of lava flows and steam plumes have sometimes revealed her image. Pele is known to travel throughout the islands, taking on the appearance of a beautiful young woman or a wizened elder, often accompanied by a white dog. Pele sometimes tests people by asking for food, drink, or a ride. She is known to reward generosity and punish unkind behavior. There are those who have picked up a woman dressed in white, only to see an empty back seat when they look in the rearview mirror.

Image of Pele in the lava. Photo by Matt Forney.

When traveling in Hawaiʻi, if you see a long-haired woman walking along an empty highway with a white dog, be sure to greet her with aloha and offer assistance. Kīlaueaʻs recent eruptions remind us that Pele remains as powerful as ever, as she continues to create and destroy.

If you want to learn more about Hawaiʻi’s supernatural realm, read here about the mysterious Menehune, the shapeshifting Kupua, the demonic Kasha, and the warrior spirits known as Night Marchers.