The Siren (1900) by John William Waterhouse

Temptation can take many forms, but the fear of being seduced by the song of a siren has haunted mankind for millennia. From a secluded island home, Sirens enthrall passing sailors with their supernatural song. Their voices cast doom on those who hear their call.

“Their song, though irresistibly sweet, was no less sad than sweet, and lapped both body and soul in a fatal lethargy, the forerunner of death and corruption.”
-Walter Copland Perry

The ancient Greeks described Sirens as bird-like creatures with human heads. These sea-nymphs live on islands surrounded by cliffs. With their beautiful voices, Sirens are able to lure sailors to their deaths. The siren song entices seamen to sail their ships into the rocky shore. In Roman accounts, Sirens were described as beautiful women who tempted mariners to their flowery shores, where the men languished until death. Modern reports of Sirens are more likely to be of a beautiful woman than a winged creature, but the peril of their song remains the same.

Sirens are skilled musicians, using instruments and voice to entice those who pass their island home. Their singing voices, as well as skill with lyre and flute, give Sirens the means to draw in passing mariners. Additionally, their clever, knavish, and deceitful words persuade men to linger. Sirens tempt the listener with their prophetic wisdom.

“Now stop your ship and listen to our voices. All those who pass this way hear honeyed song/Poured from our mouths. The music brings them joy/And they go on their way with greater knowledge.” – The Odyssey, translated by Emily Wilson

These enticements give their victims hope, but the Sirens’ seduction ultimately ends with death and destruction.

Sirens were originally the companions of the Greek goddess Persephone. After Hades abducted Persephone, her mother, Demeter, gave handmaidens the bodies of birds in order to assist in the search. When Persephone could not be found, the Sirens eventually settled on the island of Anthemoessa. According to the Roman poets Vigil and Ovid, three rocky islands known as Sirenum scopuli were home to Sirens, who would bewitch passing sailors with their beautiful songs.

Marble sarcophagus with the contest between the Muses and the Sirens, 3rd century A.D.

Owing to their reputations as captivating singers, the Greek goddess Hera called for a musical contest between the Sirens and the Muses. Zeus had created the Muses to celebrate victory over the Titans and to forget the evils of the world through their joyful song and dance. The Muses inspired the highest intellectual and artistic aspirations in gods and men alike. The destructive Sirens, with voices tainted by death, lost the contest to the graceful Muses. As a mark of humiliation, the Muses plucked the Sirens’ feathers and wore them as victory crowns.

According to The Argonautica, Jason and the men of the Argo sailed past the Sirens on their return journey from finding the Golden Fleece. In response to the danger, Orpheus drew his lyre and played music to drown out their enchanting songs.

In Homer’s Odyssey, Odysseus also had to pass the Sirens on his way home. Circe warns Odysseus that the Sirens call out to sailors from their meadow, a place filled with the rotting bodies of men previously lured to the shore.

“First you will come to Sirens, who bewitch everyone who comes near them. If any man draws near in his innocence and listens to their voice, he never sees home again; never again will wife and little children run to greet him with joy; but the Sirens will bewitch him with their melodious song. There in a meadow they sit and all round is a great heap of bones, mouldering bodies and withering skins.”

Ulysses and the Sirens (1891) by John William Waterhouse

In order to make the perilous journey, the sailors must fill their ears with wax to make them immune to the Sirens’ song. But curiosity gets the best of Odysseus, and he orders his men to lash him to the mast of the ship so he can listen to their song without throwing himself into the sea. As the ship passes, the Sirens tempt Odysseus with the promise of knowledge. When offered the opportunity to learn what has occurred at Troy and “all that shall hereafter be upon the fruitful earth,” it’s only his physical restraints that keep Odysseus from steering the ship into the rocks. The Sirens provide a temptation so powerful—the acquisition of hidden knowledge—that Odysseus was willing to risk his own life, and that of his crew. 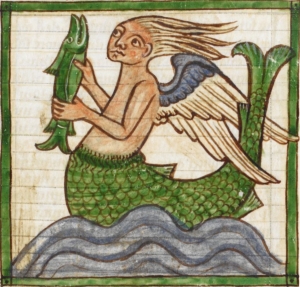 An image of a siren that has both siren and mermaid qualities. Siren, from the Bestiary Harley. Artist unknown.

Some believe that Sirens are the precursor to the Northern European mermaids. Unlike the half-bird creatures of ancient Greece, mermaids are half-woman, half-fish creatures who dwell in the water. Both Sirens and mermaids are known to lure sailors into the sea, but Sirens do so through music, song, and wisdom, while mermaids typically tempt men with their beauty. Mermaids are sometimes referred to as sirens or given the siren characteristic of beautiful singing or luring men to their doom. A recent example of this is the Freeform television series Siren, which features creatures referred to as sirens, but which are actually mermaids with the ability to enchant through song. Of course, the title “Mermaid” wouldn’t resonate with the same drama as “Siren.” Mermaids are often seen to be more compassionate, even loving, towards humanity, while Sirens are characterized as dangerous and wicked.

Examples of Sirens in Popular Culture 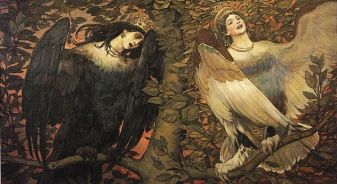 A Russian Sirin (right) and Alkonost (left). Birds of Joy and Sorrow (1896) by Viktor Vasnetsov.

Just as Eve took the apple and Pandora opened the box, releasing evil into the world, Sirens embody temptation and betrayal. An affront to reason and moderation, the Siren causes man to act against his better judgment, which leads to his fall. Sirens create the potential for seduction and destruction. The enchanting beauty of the Siren’s song has led many a man to surrender his rationality, and, in turn, his life.

One thought on “Monster of the Week: The Siren”