Taken near Nuuanu–Punchbowl, Honolulu, 2013, by jai Mansson on Flickr, CC2.0

Night Marchers (huaka’i pō) are spirits of ancient Hawaiian warriors. Though there are those who describe experiences with huaka’i pō, they are infrequently witnessed from close proximity because most who come into contact with them are cursed. Most experiences with Night Marchers involve hearing drums or chants in the distance or seeing their torches far off across a valley, because those familiar with their mana will seek refuge if huaka’i pō are near.

They proceed from the mountain down to the ocean, following ancient paths that take the marchers from their burial sites to previous battlegrounds and other sacred places. Night Marchers may carry the archaic weaponry and wear the regalia of their corporeal time. Huaka’i pō may have the ability to affect their physical environment, because though they are known to float a few inches above the ground, they sometimes leave behind footprints. Night Marchers are amongst the most feared of Hawaiian spirits and supernatural creatures. Those travelers who cross their ghostly march are likely to face death. The sounds of drums signal the approach of their procession. The resonance of a conch shell being blown, chanting, and the appearance of distant torches coming down the mountain provide warning to those who may be near the path of these warrior ghosts. By the time their foul odor fills the air, it may be too late to escape death. Night Marcher processions are known to create environmental disturbances such as wind, mist, heavy rain, high surf, and thunder and lightning. 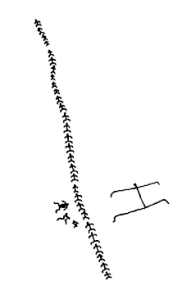 Petroglyph of marching warriors from the Puakō petroglyph fields. From: Legacy of the Landscape: An Illustrated Guide to Hawaiian Archaeological Sites
by Patrick Vinton Kirch

Once a person has observed or has been observed by a Night Marcher, they are marked for death. It is said that looking one in the eye will lead to a death spent walking amongst the Night Marchers in perpetuity. A person will be left unharmed, however, if one of the huaka’i pō in the procession is their ancestor. The warrior ancestor will call out “Na’u!” (Mine!) to affirm this individual is of their blood, and therefore is to be protected. There are those who believe that when encountering a Night Marcher procession it is possible to stay safe by lying on the ground face-down, breathing quietly, and staying motionless. For showing this respect, the Night Marchers may walk past as if the person is not there, though the spirits have been known to attempt to goad people from their prostration through a nudge or push. Though Night Marchers tend to walk established paths they have followed for hundreds of years, the placement of ti leaves, which are known to ward off evil spirits, can cause the procession to avoid a specific area. This protection has been useful to those who have moved to an area or home without knowing that they are on an ancient Night Marcher path, because no solid structure built on their path will deter the huaka’i pō. Night Marchers travel at dusk and dawn, though they may also be seen in the day escorting a dying descendant to the spirit world. They are most active during nights significant in the ancient Hawaiian lunar calendar, such as Po Kane and Po Akua. 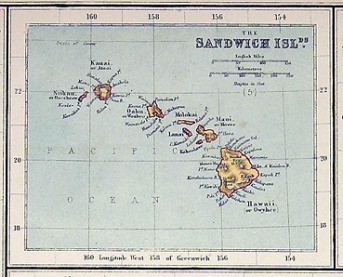 Night Marchers dwell throughout the Hawaiian Islands, particularly in sacred locations such as battlegrounds, religious sites (heiau), and places of refuge (pu`uhonua). Locations on O’ahu huaka’i pō are known to travel through include the Nu`uanu Pali Lookout, Ka`a`awa Valley, Kalihi Valley, La`ie, and Moanalua. On the Big Island, Night Marcher trails are found in Hilo, Kawaihae, Waipio, and Waipio Valley. Favored locations on Maui include La Perouse Bay, Kahakuloa, and Kekaa. Night Marchers are also known to travel in Kaunakakai in Moloka`i, Hanapepe in Kaua`i, and Hokonui in Lana`i. Night Marchers are committed to a certain route; therefore these spirits do not digress to trouble nearby humans unless those humans are on their pathway.

3 thoughts on “Monster of the Week: Night Marchers”