What was a loup-garou? Oh, well, it was the most terrible thing in the world. Sometimes it was a wolf, and sometimes it was a man, or a woman either, whichever it felt like in its wicked heart. And always it could take your heart out, and then you died, because you could not breathe without your heart.
—Laura Elizabeth Howe Richards, Marie (1894)

From deep within the murky bayous of Louisiana comes the legend of the dire lycanthropic creature known as the Rougarou. Rougaroux are found in French-speaking areas of North America such as Québec, but most particularly in Cajun Acadiana (in and around New Orleans), where its legend has proliferated from those of the werewolf-like loup-garou of medieval France—loup is the French word for wolf, and garou is a French word similar in meaning to werewolf. Cajun lore uses the terms loup-garou and rougarou interchangeably. A major difference between the Rougarou and the creature we more commonly think of as a werewolf is that the Rougarou has agency over its transformation, and maintains the consciousness and intelligence of its human form throughout that change. 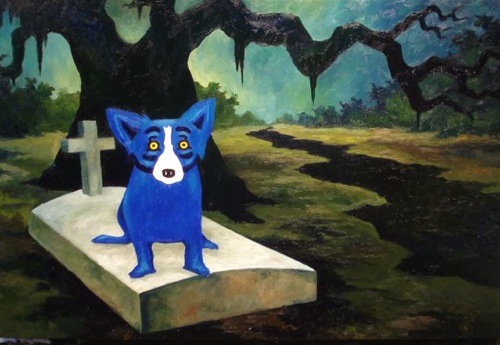 Louisiana artist George Rodrigue (1944–2013) originally painted his famous “blue dog” as an illustration of a loup-garou tale. The Blue Dog is now a cherished symbol of Cajun New Orleans. Image from the George Rodrigue Foundation of the Arts.

The Rougarou is large and hairy, with sharp teeth and a long snout and claws. But as with everything else about the Rougarou, its appearance varies. It looks simply human most of the time, but when transformed, it may appear as a dog- or wolf-headed creature, or human-wolf hybrid, much like the “wolfman” of fable and film. The Rougarou has also been compared to a vampire due to its hunger for human blood. It has additionally been conflated with Native American and First Nations legends of another bloodthirsty monster with human intelligence, the Wendigo, as well as the North American cryptid Sasquatch (Bigfoot). The Rougarou may also be considered a bogey-beast when framed as the antagonist in threats made to wayward children and those who break the Catholic tradition of Lent.

Rougarou at the Audobon Zoo in New Orleans. Photo by Angie Garrett.

Legends of how a Rougarou comes into existence are both various and murky. The monster may be created in a similar way to a werewolf or vampire (that is, by being bitten by one). Some of these stories note that victims of a Rougarou “bloodsucking” become one themselves for 101 days, and that only by keeping their monstrous illness secret for that length of time may these victims become wholly human again. Other common lore indicates that the Rougarou is only ever created through a witch’s curse.

Defense Against the Rougarou

The Rougarou is a wily and dangerous foe. It has the heightened strength, speed and sensory abilities of a werewolf while maintaining the intellectual capacity of a human. It is also suggested that it is hazardous to one’s soul to make eye contact with a Rougarou, whose eyes are often described as being fiery red like those of an evil spirit.

But the Rougarou is not without some odd weaknesses. It is said that the Rougarou greatly fears frogs (an unfortunate phobia for a swamp-dwelling creature), and that it is not merely deterred by salt, but will burst into flame when salt is thrown on it. New Orleans hoodoo legend suggests that a symbolic figure of a “Gator Man,” an effigy with a human body but the head of an alligator, can serve to protect against the Rougarou, though other sources suggest that this reptile-headed creature represents the Rougarou itself.

There’s a place God’s angels don’t go—
Satan’s wolves all loom large
Over creatures only madmen know.
Its Louisiana guard dog’s nightmare;
Cajuns don’t say his name—
But they say looks just like a rabid dog
And he walks upright like a man.
—“Loup Garou ‘Bal Goula’” by Willy DeVille

The Rougarou in Popular Culture

The Dresden Files: The second book in Jim Butcher’s Dresden Files series of novels, Fool Moon, features a Rougarou (loup-garou). Butcher differentiates between four different “breeds” of werewolf (or “wolven theriomorph”), of which the loup-garou is the most dangerous. The loup-garou of the Dresden Files, though, is perhaps more like a traditional “monster movie” werewolf (changed by the full moon, susceptible to certain silver weapons), and some traits of the other breeds are more in line with those of the  traditional Rougarou. Hexenwolves employ a magical talisman to effect their transformation (often a wolf-hide belt), and “classical” werewolves, like hexenwolves, maintain their human intellectual faculties while in lupine form. But these classical werewolves do not take on wolf-like characteristics other than physical appearance when they transform. (The fourth breed is the lycanthrope—while Butcher’s classical werewolf becomes a human in the body of a wolf, the lycanthrope is more like a wolf in the body of a human, and does not physically transform.) 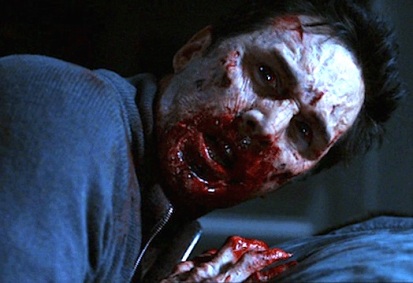 Supernatural: The Rougarou (or rugaru) is mentioned in several episodes of Supernatural, and was a Monster of the Week in the Season 4 episode “Metamorphosis,” in which the Winchesters first learn about these humanoid creatures with pale, veiny and “wormy” skin and black, demonic eyes. As in 16th-century French lore of the loup-garou, Supernatural rugaruism is passed on from parent to child, and once triggered, the affliction begins to manifest itself through an unceasing hunger that quickly escalates to a craving for raw meat. Once having succumbed to the subsequent overwhelming desire to taste and take human blood, the Rougarou is permanently transformed. The lore of Supernatural suggests that the only way to kill a rugaru is to burn it alive, though Dean once apparently succeeded in killing one in Purgatory with Ruby’s demon-killing knife.

“Metamorphosis” is an early example of the Winchester brothers facing the moral quandary of whether it is ethically wrong to kill a monster before it has committed a monstrous act—or even before it has begun its inevitable transformation, perhaps not yet even aware of its inherited affliction.

More recent appearances of rugarus in Supernatural include Season 12’s “Family Feud,” in which Mary Winchester hunts and kills three of them, and Season 13’s “Breakdown,” in which a rugaru is among the monsters bidding online for fresh human organs.

Should you happen to be along the Mississippi in Louisiana’s Bayou Goula on St. John’s Eve some summer, when the Rougaroux gather on the bayou banks to dance at the Bal Goula, you would be wise to keep your eyes averted and have a measure of salt on hand, if not also a flamethrower. But if, through the Bald Cypress trees and rank Spanish moss, you spy a red-eyed Rougarou and are are low on other ammunition, you can always try hurling any nearby frogs at it.

Want to learn more about Werewolves, Black Dogs, Hellhounds and other nefarious lycanthropes? Check out the newest Monster Pack in our Supernatural History Series: The Wolf Pack, now available on Etsy!

One thought on “Monster of the Week: The Rougarou”