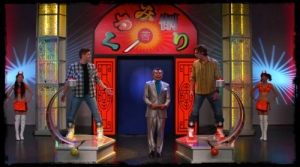 Dean and Sam on a Japanese game show in “Changing Channels”

Sam and Dean Winchester have kept fans engaged through 12 seasons of Supernatural. The series’ passionate fanbase has helped ensure its continued renewal by the CW. It’s possible the series could persist as long as actors Jared Padalecki and Jensen Ackles want to keep playing the Winchester brothers. Supernatural keeps fans under its spell through creative storytelling and innovative ideas, grounded in emotional family moments. What other series could tell a story about two brothers hunting monsters from the perspective of a car called “Baby”? Their unconventional approach has helped Supernatural sustain its appeal, even after a dozen years.

No series does meta like Supernatural. There are shows that make self-referential jokes and occasionally break the fourth wall, but Supernatural has made an art of it. [This article makes reference to storylines and characters throughout all 12 seasons of Supernatural.]

Getting off the tour in “Hollywood Babylon”

Self-reflexive moments can be seen throughout the series, whether it’s Crowley (Mark Sheppard) commenting that he hasn’t seen Castiel (Misha Collins) all season in “Caged Heat” or Dean Winchester (Jensen Ackles) looking straight at the camera to share his disapproval of Destiel slash fiction during “Fan Fiction.” With a wink and a nod to fans, Supernatural throws in quite a few shout outs to the actors’ work on previous projects, as well as mocking second-rate Supernatural episodes.

In the world of “The French Mistake,” and IRL, they’re not even brothers and Sam is married to fake Ruby

Supernatural goes beyond a few lines or lingering looks by creating entire meta episodes. The Season 1 episode “Hell House” began the trend with the introduction of amateur ghosthunters who see John Edward as a role model and ask, “WWBD?” (What would Buffy do?). “Hollywood Babylon” takes things a step further when Sam and Dean pursue a case on a movie set. In “The French Mistake,” Sam and Dean Winchester literally crash through the fourth wall to find themselves as actors in a television show called Supernatural.

In “Fan Fiction,” Marie doesn’t like it when the authors insert themselves into the narrative

The relationship between the author and the audience is explored throughout the course of the series. After spending millennia on Earth, the scribe of God, Metatron (Curtis Armstrong), has become a great consumer of fiction. In “Metafiction” he poses the question of who generates meaning in a story through a Masterpiece Theatre-inspired opening. Later, in “Our Little World,” Metatron claims that the novel is dead and reality is the great literature of our time. Supernatural isn’t afraid to insert the author into the story, nor do they hesitate to make reference to this self-conscious practice.

Sam and Dean are surprised to learn that there’s a series of books based on their lives in “The Monster at the End of This Book.” Later, “Sympathy for the Devil” introduces a superfan of the book series who dabbles in slash fiction. And then, as though having a fictional book series about the lives of the Winchester brothers isn’t meta enough, we meet a whole fan community, ready for cosplay and RPGs, at a convention in “The Real Ghostbusters.” The books inspire a high school musical in the series’ most meta episode, “Fan Fiction,” which serves as a tribute to Supernatural fans. Watching high school girls sing about their family tragedy while inserting a little subtext into the act is just another day in the life of the Winchesters.

In “Changing Channels” the brothers find themselves in Dr. Sexy, MD

Supernatural takes existing tropes and makes them its own, sometimes turning the genre on its head. The best example of this occurs in “Changing Channels,” when Sam and Dean are transplanted into parody versions of Grey’s Anatomy, CSI Miami, Knight Rider, a Japanese game show, and a commercial for herpes medication, complete with Full House-inspired opening credits.

Dean chooses between the rope and lead pipe in “Ask Jeeves”

Supernatural sometimes gives a nod to certain genres. There’s a play on Clue in “Ask Jeeves,” allusions to I Know What You Did Last Summer in “Halt & Catch Fire,” and a transformed Romeo and Juliet death scene in “Red Meat.” The Season 12 episode “First Blood” takes a page from manhunt and prison escape movies such as Rambo, Cool Hand Luke, and Watchmen. Most recently, we had the thrill of watching a Quentin Tarantino-inspired episode in “Stuck in the Middle (With You),” with an opening scene that mirrors Reservoir Dogs.

In “A Very Supernatural Christmas” young Sam learns that Santa doesn’t exist, but monsters do

The series has its own approach to holiday episodes. “A Very Supernatural Christmas” reveals that holidays growing up on the road weren’t always ideal while keeping things fun with a drunk Santa and paganism. Besides, what are holidays for but to get your heart torn out on Valentines Day (“Love Hurts”) and raise some Hell on Halloween (“It’s the Great Pumpkin, Sam Winchester”)?

Supernatural writers aren’t afraid to be referential when it comes to TV tropes either. When resorting to the Cousin Oliver trope of suddenly adding a new family member, the writers called the episode “Jump the Shark,” referring to the desperate measures that tend to signal the death of a show. The Winchesters meet their new family member at a café called Cousin Oliver, which displays a poster of a water-skiing stunt show starring the Fonz, making a direct reference to the namesake episode of the Jump the Shark trope.

The genre-busting nature of Supernatural transforms comedy into tragedy, horror into slapstick, and the erotic into a running gag. In “Mystery Spot,” Sam watches Dean suffer a series of increasingly comic deaths, but when the loop is finally broken the story takes an unexpected turn into tragedy. When the amateur ghost-hunting team returns in “Ghostfacers,” the series pokes fun at supernatural reality TV, managing to create a story that is both hilarious and terrifying. The adult film Casa Erotica was first introduced when making comic references to the motel room entertainment, but later became an unexpected form of angel communication.

Dean isn’t his usual self in “Yellow Fever”

Supernatural may be a series about two brothers with a tragic past who hunt monsters, but that doesn’t keep it from being clever and funny. One of our favorite episodes, “Yellow Fever,” uses a tale of horror to expose a completely new side of Dean that’s driven by fear and terror, resulting in an impressive comic performance by Jensen Ackles. Dean reminds the audience of the absurd nature of the hunter life:

“I mean, come on, we hunt monsters! What the hell?! I mean, normal people, they see a monster, and they run. But not us, no, no, no. We search out things that want to kill us. Yeah? Huh? Or eat us! You know who does that? Crazy people! We … are insane! You know, and then there’s the bad diner food and then the skeevy motel rooms and then the truck-stop waitress with the bizarre rash. I mean, who wants this life, Sam? Huh? Seriously?”

In the Season 12 episode “Regarding Dean,” Dean shares a different perspective after Sam reminds his memory-hexed brother about the family business:

Dean: “Monsters are real and we’re the guys that kill them. I mean, come on, best job ever.”
Sam: “Yeah. If you like greasy diner food, crappy motel rooms, more than one Apocalypse.”
Dean: “I don’t know. We kinda sound like heroes to me. And our best friend’s an angel!” 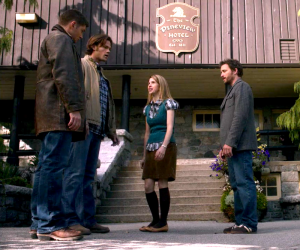 Superfan Becky speaks for us all in “The Real Ghostbusters”

Supernatural is a smart series that never takes itself too seriously. The writers are able to create something new while finding ways to include the fans. Over the past couple years other television series have been catching up with the idea of letting the viewers in on the joke, but Supernatural has been giving fans insider status for more than a decade. Not only has this approach kept the series engaging, it has also reinforced the relationship with the audience. We can’t wait to see what Supernatural will throw at the wall next. Whatever it is, it’s sure to stick.