In the Season 13 Supernatural episode “A Most Holy Man,” the Winchesters get involved in the trade of illegal religious artifacts and organized crime. Sam and Dean remain focused on opening a portal to the Apocalypse Universe to rescue their mother and Jack. “A Most Holy Man” was written by showrunners Andrew Dabb and Robert Singer, who pay homage to ’40s noir movies. The episode was directed by Amanda Tapping, who, as well as having played the angel administrator Naomi in Season 8, has become a regular director for the Supernatural series. Supernatural creates something fun and different in “A Most Holy Man” by referencing Hollywood crime dramas of the past.

Supernatural keeps things fresh with episodes that reference genres or themes. It’s part of how Supernatural has remained one of the most innovative shows on television. There’s a play on Clue in “Ask Jeeves,” allusions to I Know What You Did Last Summer in “Halt & Catch Fire,” and a transformed Romeo and Juliet death scene in “Red Meat.” During season 12, “First Blood” took a page from manhunt and prison escape movies such as Rambo, Cool Hand Luke, and Watchmen, while the Quentin Tarantino-inspired episode “Stuck in the Middle (With You)” opens with a scene straight out of Reservoir Dogs. “A Most Holy Man” references the film noir genre, playing up the dark imagery, an empty urban landscape, and old Hollywood décor, all to the backdrop of a crime jazz soundtrack.

The episode calls up The Maltese Falcon with characters Margaret Astor (Leanne Lapp) and Richard Greenstreet (Dominic Burgess), named after actors from the film (Mary Astor and Sydney Greenstreet). Margaret Astor is a femme fatale character who shows interest in Sam, reflecting the sexual motivations often seen in film noir.

Margaret: “Personal relationships are very important to me.”
Sam: “Right. Well, I would personally appreciate any help you could give us.”

Shadows are often used to create stylized images in film noir, most famously in the visually stunning masterpiece The Third Man. The shot of Father Lucca Camilleri (Massi Furlan) being followed by someone only seen as a shadow with a gun, as well as the earlier scene of him hiding in the doorway of the alley, provided well-constructed examples of the use of shadow and light in film.

Film Noir is often thought of as a detective genre, but many of these films centered on gangsters and organized crime. “A Most Holy Man” introduces Seattle mob boss Santino Scarpatti (Al Sapienza). The end of the episode contains a shootout matching any from the mobster genre.

In order to complete the spell to open a portal to another universe, the Winchesters need the grace of an archangel, a fruit from the Tree of Life, the Seal of Solomon, and the blood of a most holy man. Sam has been in research mode.

Castiel is busy tracking down fruit from the Tree of Life, so he never appears in this episode. With only Sam (Jared Padalecki) and Dean (Jensen Ackles) on the case, we get a back-to-basics episode with no allies or frenemies to help the Winchesters. What’s unusual about “A Most Holy Man,” beyond the film noir tribute, is the lack of a supernatural element or character. 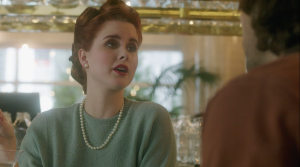 Sam’s internet search leads them to a religious artifacts dealer in San Francisco named Margaret Astor. Astor directs them to Richard Greenstreet, but warns them, “Greenstreet has all the trappings of a gentleman, but I would advise caution.” When the Winchesters ask for his help he rebuffs them:

“I gave up on worthy causes years ago. And as I said, the blood cost me a fortune. Judging by your Montgomery Ward suits and your cheap ties, I’m guessing you don’t have a small fortune—or for that matter, two nickels to rub together. So I’m quite afraid this has been a waste of your time—and more importantly, mine. Good day, gentlemen.”

The Winchesters agree to steal the skull of St. Peter, recently taken from the Holy Sisters of Malta Monastery, in exchange for the blood of Saint Ignatius. It doesn’t sit well with Sam, who later complains, “So this is what we’ve come to? Thieves?” Dean points out that neither of them are perfect: 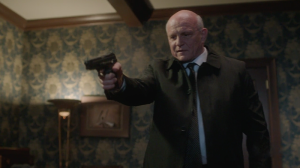 The skull thief has checked into the Patricia Hotel, where Sam and Dean find him dead. The plot is further complicated when a man with a gun comes into the room pretending to be a cop. The Winchesters are handcuffed to the radiator while the man looks for the skull. When he leaves, Sam pulls out a lockpick.

The plot thickens when they return to the Impala to find mobster henchmen waiting for them. Mob boss Santino Scarpatti points out they made a devil’s bargain with Greenstreet because he has no respect for these religious relics. He wants the Winchesters to steal the skull for him, which he considers rightfully his. Dean makes his best Robert De Niro face when he points out, “But it was stolen. I don’t know. … Rightfully belongs to you. Mmmm?” Under duress, Sam and Dean agree to get the skull for him.

In order to get a rare ingredient for a spell, the Winchesters find themselves between two Faustian bargains—­a pact in which a person trades something of moral or spiritual importance, such as personal values or their soul, for worldly or material benefit, such as knowledge, power, or riches. In this case, they’re engaged in stealing a religious artifact in order to ultimately get to their mother and Jack. 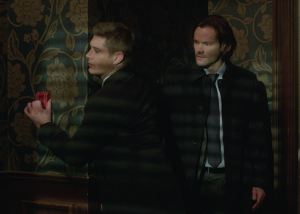 Dean thinks the skull is still in the room—he can “feel” it. Sam searches the room, and just as he finds a piece of paper with some numbers written on it, the man who has been following them knocks him out. Supernatural makes reference to the frequency in which Sam gets knocked unconscious as the Winchesters leave the hotel.

Dean: “Sure you’re not drowsy? How many fingers am I holding up?”
Sam: “I’m fine.”
Dean: “Okay, I’m just saying you’ve taken a lot of shots to the head lately. I know that Disney princess hair gives you some padding, but …”

The plot becomes more complicated when they find the man who took the paper from Sam unconscious outside the hotel. He is Father Lucca Camilleri, and he has come from Malta to try to buy the skull back from the thieves. He explains how important the skull is to his village. Dean is more cynical, pointing out that the world is a screwed up place. Father Camilleri explains that life isn’t about luck, but effort:

“All the time I hear people saying the world’s not perfect. And they’re right; it’s not. Do you use that as an excuse? Do you use it to excuse your own sins, your failings, and your laziness? Do you use it to give a bad man power because the world’s not perfect? Or do you work? Do you try and improve things in whatever way you can? Guys, the world will never be perfect, but if good men do good things, it can be better. Every day can get better.”

His speech has an effect on Sam, who assures the priest they will get the skull back for him. Sam is able to convince Dean to go along with his plan in a very funny conversation about the Impala:

Sam: “If somebody stole the Impala, what would you do?”
Dean: “Murder. I’d murder them all. … There would be torture first. There’d be a lot of torture. And it would end up with death. If I can’t have it, nobody can.”

Once they realize the piece of paper had a tracking number on it, they hatch a plan to go after the skull. It turns out that all the players are involved: Scarpatti, Greenstreet, and Astor. Sam enters the warehouse where they are meeting with Father Camilleri’s suitcase of cash. Outside the warehouse, Camilleri assures Dean that God will see them through. Dean doesn’t have much confidence in God.

Dean: “God, he don’t give a damn about me or you or anyone else. So if you’re expecting some miracle to happen, good luck.”
Father Camilleri: “I’m sorry. I didn’t mean that God would reach down and protect us. Of course that’s not going to happen. But I believe all good things are god things. And what your brother’s doing is a good thing.”

In the warehouse, a shootout ensues when Greenstreet tries to cut out Astor by offering a deal to her man Cromarty (Fulvio Cecere). Father Camilleri is shot, but, miraculously, he is only grazed by the bullet. Greenstreet is one of the few left standing (or, more precisely, crouching), and admits he never had the blood of a saint.

With Greenstreet arrested and all the other players dead, Father Camilleri is heading back to Malta with the skull. Dean remains pessimistic, but Father Camilleri tells him, “Everyone, we all have faith in something, even if it’s just a hunk of bone.” Sam has read that Father Camileri has been given the title of apostolic protonotaries supernumerary. When he asks what that means, it turns out that the Pope has referred to him as un uomo santissimo—a most holy man. Dean tells him, “Before you go we’re going to need one more thing.” As it turns out, God works in mysterious ways.

“A Most Holy Man” Review

Though some don’t like these kinds of standalone Supernatural episodes, particularly when they have a theme, we’re not those people. “A Most Holy Man” was outstanding stylistically and cinematically. Kudos to Amanda Tapping, the set department, and the camera crew, who all helped to create this rich tapestry. Singer and Dabb have written a thoughtful episode with questions of morality and faith built in. With “A Most Holy Man,” Supernatural gives us a refreshing, funny, and insightful episode that gets even better on the second watch.

2 thoughts on “Supernatural S13E15 Review: A Most Holy Man”