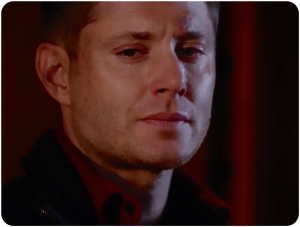 “Red Meat” isn’t the usual fare for Supernatural. In Season 11, Episode 17 we get an adaptation of what’s become a Supernatural trope involving death and sacrifice. Sure, we’ve seen the Winchesters die many times before. We’ve even seen them die in a couple opening scenes. We’re no longer shocked when the Winchesters die or come back to life. Supernatural throws us a curveball by giving us an imitation of death and a failed attempt by Dean to play out his sacrificial role. It’s like a version of Romeo and Juliet in which everybody lives—except for the monsters. 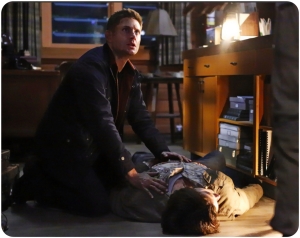 In a cabin in the woods, Sam and Dean battle a couple of werewolves who have captured campers Corbin (Blair Penner) and Michelle (Erin Way). One of the werewolves manages to shoot Sam in the stomach before Dean kills him. Corbin wants to leave Sam behind because more werewolves are coming and he’s slowing them down. While Dean is out making a litter in which to carry Sam, Corbin tells Sam, “He won’t leave you. And we won’t last out there without him,” and then chokes Sam. Dean comes back to find his brother seemingly dead. Later, in his Romeo moment, Dean poisons himself, but only to make a deal with Reaper Billie (Lisa Berry) to exchange his life for Sam’s. 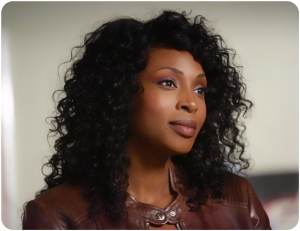 Reaper Billie is surprised to see Dean, telling him, “Though I have to say of all the ways I thought you’d go—heart attack, some fang, choking on a burger while binge-watching Charles in Charge … never took you for the suicide type. Doesn’t fit your whole martyr thing.” There’ve been times Dean has made the ultimate sacrifice—he used a similar tack to this in “Appointment in Samarra”—and it’s always been to save his brother. This time he offers himself up in a futile effort since Sam isn’t actually dead, but “scary, crazy, death machine” Billie isn’t making any deals anyhow. She can’t wait to toss one of these Winchesters out into the Empty. 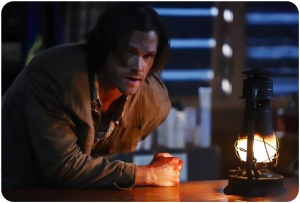 Sacrifice isn’t a foreign concept for Sam either, but his sacrifices are more often in the service of humanity. Whether he exposes himself to a deadly virus or throws himself into the Cage, Sam has always emphasized the “saving people” part of the family motto. Sam gets shot helping save Corbin and Michelle, then tells them to leave without him, even as he’s bleeding out. How does humanity repay him for his sacrifice? With strangulation. Corbin choking Sam was one of the more grisly scenes in Supernatural. You can see the shock on Sam’s face as Corbin covers his mouth and nose. When Sam regains consciousness he shows incredible strength and stamina by killing two more werewolves and then driving himself to the hospital. That dude is tough. 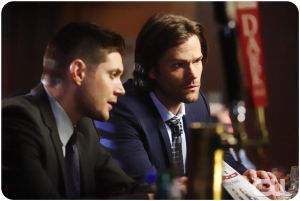 Dean lies to his brother when Sam asks him what crazy thing he did this time when he thought Sam had died. He’s probably just embarrassed. As Billie pointed out to Dean: “You pretending you’re trying to save Sam for the greater good, when we both know you’re doing it for you. You can’t lose him.” But how will the experience of thinking he had lost Sam and desperately trying to save him affect Dean moving forward? As Michelle said, “After everything we survived together, I watched the man I love die. There’s no normal after that.”

Though How We Got Here is a common TV trope, Supernatural rarely has a cold open that drops us well into the story and then uses flashbacks to tell the first part of the narrative. The flashbacks seemed unnecessary, though they did provide some moments of calm during an intense episode. We get an update on the main mission and some brotherly moments between the Winchesters. Sam and Dean still aren’t making any progress in defeating Amara or finding Castiel, but at least the brothers are on the same page. 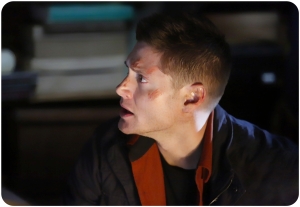 “Red Meat” was written by Robert Berens and Andrew Dabb and directed by Nina Lopez-Corrado. The episode had an unusual feel to it. Except for the scene with Billie, there was relatively little dialogue, so often the characters’ actions spoke louder than words. Some of the moments in the cabin and in the woods had a found-footage feeling that made their experience seem a bit more harrowing. Outstanding guest performances by Erin Way and Lisa Berry complemented the skilled acting by Jared Padalecki and Jensen Ackles in this emotionally complicated episode.

“Red Meat” was foreboding, making us wonder how this will tie to Supernatural episodes to come. Supernatural is very good at layering and building mythology over time. “Red Meat” has the feel of an episode that becomes increasingly meaningful as more is revealed in the series, like Houses of the Holy. The remaining episodes of Season 11 are being promoted as some of the strongest work in the series, so we’re looking forward to seeing everything come together in what has been an excellent season.