Zoinks! It’s finally here. On Thursday, March 29, Supernatural will have its first crossover episode. No, it’s not with Arrow or iZombie, or even The 100, despite Season 13’s foray into a post-apocalyptic world.  Hold the phone! Supernatural will crossover with your favorite childhood show, Scooby-Doo, in an episode called “Scoobynatural.”

Sam and Dean Winchester have found themselves on other television shows before, courtesy of the Trickster, but this is the first time they’ve gotten pulled into a cartoon. Supernatural has gone animated once before, with Supernatural: The Animation, a Japanese anime based on the television series. Even so, we’ve never seen anything like a supernatural drama crossover with a children’s cartoon. When you really think about it, though, it’s kind of perfect fit. Both series deal with ghosts (or people pretending to be ghosts),  both sets of characters manage to solve a mystery each week, and both have had the course of events changed by a dog. Rut Roh! 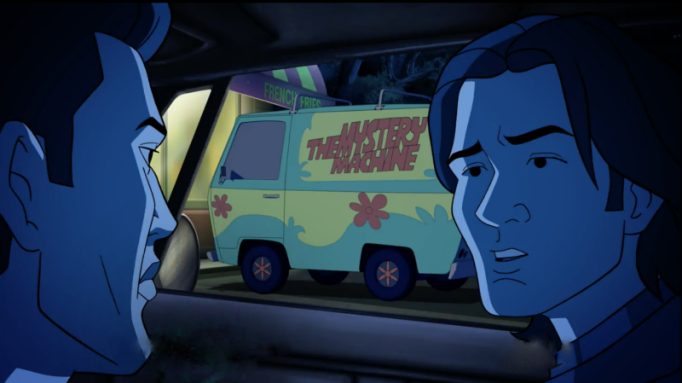 Does the Mystery Machine have a cache of weapons in the back?

“Scoobynatural” will be based on the 1970 Scooby-Doo, Where Are You! episode “A Night of Fright is No Delight” in which the gang is haunted by the Phantom Shadow. Creepers!

At San Diego Comic-Con 2018, the cast talked about the crossover in an interview with Entertainment Weekly. Misha Collins pointed out, “No live-action drama has ever co-opted an animated show and aired it within the one-hour segment. It’s really genre-bending.”  Jensen Ackles noted that there had been a lot of talk about doing some kind of crossover since the CW is known for crossovers among their DC comic properties. He noted, “They’ve often talked about Supernatural crossing over into something. I love that it’s Scooby-Doo. It’s such a random choice and I love it.”

Creative choices such as crossing over with a children’s mystery cartoon have kept Supernatural on the air for 13 seasons. Supernatural remains one of the most innovative shows on television today.

Scoobynatural airs Thursday, March 29 on The CW at 8pm ET.

Watch the Supernatural trailer below.