“Halt & Catch Fire” starts with some old-fashioned drinking and driving. A couple of college kids, Billy and Janet, decide to take a trip to Taco Town, which apparently they need directions to find. It gets really cold in the truck and the navigation app screams, “Janet, get out of the truck, now!” Luckily, Janet complies so she can later serve as a witness. The truck goes out of control and drives itself over a pier with Billy still inside.

[If you prefer to listen to this recap in an mp3 audio file, you can do so below, otherwise read on]

Back at the bunker, Sam tells Dean that Castiel is making progress in their search for a way to remove the Mark of Cain, “Bad news—he discovered riverboat gambling. Good news—he thinks he might be closing in on Cain.” Dean doesn’t seem to think this is a good plan. He points out that if Cain knew how to remove the Mark he would have done so centuries ago. Dean stops Sam from moving on to one of his pep talks by telling him about a case of a possessed truck. Noooooooo!!!!! 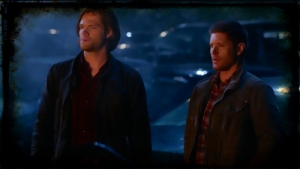 Sam and Dean arrive on campus to talk to witness Janet, introducing themselves as Agents Grohl and Cobain. She tells them that Billy had inherited the truck from his brother who died in Afghanistan. They decide to go and burn the truck that Billy died in, just in case it’s haunted. Dean suspects the older brother didn’t like Billy driving his truck.

Sam: “If you died and I drove your car, you’d kill me?”
Dean: “If you stunk her up with tacquitos, probably.”

After a sorority girl, Julie, is killed by her computer cord, the boys come back to campus to investigate, but get no leads after talking to Julie’s roommate Delilah. There are several goofy lines about young people and social media that fall far from the clever pop culture references we have come to expect from Supernatural. While Dean enjoys a delicious smorgasbord of college junk food, Sam is able to get into the dead girl’s messages. The find the number 810 and identify three local addresses with that number. Through this unusual method, they come across a woman whose husband, Andrew Silver, was killed in a car accident nine months before. It appears that the red-haired girl, Delilah, has been the one leaving flowers at the death scene. Dean leaves messages for Delilah, which freaks her out. Delilah tells her friend Kyle that the feds keep calling. When she tells him that they should come clean about what happened, Kyle threatens her.

After Delilah leaves, Kyle gets a call on his cell and a demonic voice asks, “What time is it?” Suddenly his speakers start to play incredibly loud and be can’t turn it down. Then he dies. That’s right … he dies. Apparently your grumpy neighbor knows what he’s talking about; loud music is bad for you. Kyle’s brain apparently was jellied by the speakers. It looked just as silly as it sounds. Also, it’s hard to care about any of these awful kids so far. We are rooting for the spirit.

Finally, Delilah agrees to talk to Sam and Dean since her friends are dead and she is clearly next. They tell her that it is a ghost and that they will protect her. She tells them about how Billy killed Andrew in the car accident. She describes how she, Julie, Kyle, and Billy were driving around. The scene in the car is actually pretty funny, with the girls taking selfies in the back seat, and the boys talking Twitter:

Billy crosses the center line and slams into Andrew Silver’s car. Andrew hits a telephone pole and sits in his car glaring at the kids. A wire drops down and hits the car, which then bursts into flames. Hence, the title Halt and Catch Fire. At Billy’s insistence, due to his previous DUI, the kids drive away leaving Andrew in the car on fire, without even calling 911. We have no sympathy for these horrible kids.

While Sam goes to revisit the accident scene, Dean stays on guard duty with Delilah. She opens up to him about how guilty she feels about Andrew, but we have no pity for her. Though, apparently Dean does, and tells her he can relate.

Dean: “I’ve made more mistakes than I can count. Ones that haunt me day and night.”
Delilah: “So how do you deal?”
Dean: “Whiskey … Denial. I do my best to make things right, whatever that may be. For you, maybe it’s … maybe it’s coming clean. You know, finding a way to ask for forgiveness. But not breaking the bank at your local florist. I mean … real forgiveness. You can’t just bury stuff like this. You got to deal with it.”

While at the accident scene, Sam has a realization. He calls Dean to tell him that Andrew’s haunting is being channeled through the wi-fi. Really, the wi-fi? A wi-fi haunting is actually even lamer than a possessed truck. He tells Dean to get Delilah somewhere safe and turn off all the routers in the sorority house, while he follows up on an idea. Of course, Delilah has no idea where the routers are, but she does know where the wi-fi sucks, so they go to the basement.

Andrew’s wife admits that she has been communicating online with the ghost of Andrew. She has realized that the deaths at the college could be related to Andrew’s spirit. She tells Sam that she didn’t want to face the truth, “because I knew it was revenge that brought him back, and if I tried to stop him that he might go away. And I didn’t want to lose my husband again.” Back in the basement, Andrew’s spirit has managed to get to Dean and Delilah through a ridiculously giant phone abandoned in the cushions of the couch. He goes after Delilah, but luckily Dean has an iron poker to stop him. Dean tries to talk sense into the angry Andrew, messaging Sam 911 on the giant phone, as he does sot:

“Andrew, listen to me. You have every right to be pissed. But take it from me … the more you kill, the crazier you’ll get. The blood fuels the rage. So, it looks like to me you’ve got two choices. You can keep killing and become something that you won’t recognize or you can move on, ’cause that is the only thing that is gonna give you peace. So, it’s up to you, man. Pain or peace.”

Apparently Andrew is for pain, as he reappears and begins to attack Dean. As angry spirit Andrew is strangling Dean, he hears his wife’s voice over his shoulder. He turns around to see Delilah holding up the phone. His wife is on the screen. Its a good thing they found this giant phone and the basement wifi is actually good enough to let them facetime. She tells Andrew that revenge is hollow and that it’s time for both of them to let go. It all feels very Ghost Whisperer-esque. At least he merely disapparates in a burst of light without actually walking toward the light.

It’s the next day. Sam and Dean bring Delilah to the Silver household to make her peace with Andrew’s wife. We would’ve liked to have seen them drop her off at the police station, but that’s not really their thing. Dean tells Sam that his peace is working cases and helping people, and that he’s done with trying to find a cure for the Mark of Cain. When Sam tells Dean that he can’t stop fighting, Dean responds that the answer lies within himself and that he needs to be the one calling the shots. Sounds very Zen­—at least the first part. When he tells Sam that he’s going to fight until he can’t fight anymore, Sam has no retort. Hopefully this will be the end of Sam’s pep talks for a while.

After our proclamation that Season 10 was the best season since Season 5 in last week’s recap of “About a Boy,” perhaps it was inevitable to have such an unfortunate episode. We haven’t been so disappointed since the terrible and confusing episode “Bloodlines” in Season 9. We were particularly disappointed since “Halt & Catch Fire” was written by the same team that brought us the excellent episode “Ask Jeeves.” Though writers Eric Charmelo and Nicole Snyder nod to I Know What You Did Last Summer in “Halt & Catch Fire,” it doesn’t work nearly as well as their Clue-inspired episode. Neither the story nor the guest actors were very interesting, and we weren’t even sure if Sam was actually in the episode. Well, we have something to look forward to, because things can only get better from here.