The 100 has proven to be a very interesting and complex show, gradually becoming one of the most fascinating series on television today. Initially, it felt more like a teen drama than a dystopian tale. Then it quickly became clear that The 100 is a captivating story about the challenges of building community and dealing with human conflict.

The 100 premiered on The CW in March 2014. Loosely based on the novel by Kass Morgan, The 100 takes place 97 years after nuclear war has wiped out most of the population of Earth. Some humans survived in orbiting space stations, collectively known as the Ark, while others have managed to survive on the ground.

The first few episodes of The 100 had a Lord of the Flies feel, with a group of adolescents creating a new society on the ground. There are struggles for leadership, questions about their relationship with those left on the ark, and threats from the outside to contend with. While the group on the ground tries to find it’s way, political intrigue and questions of survival among the rest of the members of the Ark continue to grow. The fast-paced narrative creates changing circumstances and new enemies in Season Two of The 100. The story is constantly changing as new circumstances arise and additional characters are introduced. The series has a richness and depth that makes it stand out.

We see cultural clashes between military and civilians, adolescents and adults, grounders and Ark survivors, and the Mountain Men and everybody else. The 100 is able to convey characters’ perspectives and how their views conflict or merge. Characters gain insight as their circumstances change, altering their perspectives. In The 100,  the evolution of a character’s outlook can create significant changes to the story through the resolution of conflict or the creation of new disagreements. What were once moral absolutes become uncertainties. The evolving story allows for moral complexity and unexpected turns in the narrative. On The 100, enemies become allies, captors become saviors, and heroes become killers. Like no other series on television today, The 100 shows the audience how experience influences perspective, and the nature of the layered and complicated processes that create insight. 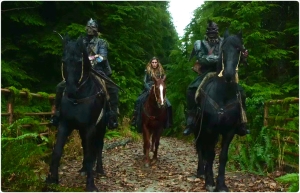 The 100 reflects what is fantastic about science fiction because we can see the evolution of ideas and beliefs taking place at an individual character level and a societal one. The best science fiction stories explore difficult philosophical and sociological concepts. The 100 explores the nature of war and social conflict by constantly redefining “the other.” When enemies become real people and cultural gaps are bridged, social identity evolves. One of the best scenes in Season 1 of The 100 involves the exchange between the leaders of two opposing forces who experience the Rashomon effect when it becomes clear how the same events can be interpreted completely differently. Even if you don’t think of yourself as a sci-fi fan, you’ll love the powerful storytelling created through these conflicts.

The 100 is full of impressive female characters, many of whom are leaders in some way. There’s the main protagonist Clarke (Eliza Taylor), a young woman thrust into the role of leader in an unforgiving world. Clarke’s mother Abby (Paige Turco) who despite wanting to save everyone, has had to make her own difficult choices in the past to save what matters most to her. Octavia (Marie Averopoulus) is ready to embrace a new way of life after having been forced to live in hiding from her own society throughout much of her childhood. We eventually meet many other powerful female characters including Raven Reyes (Lindsey Morgan), Anya (Dichen Lachman), Indra (Adina Porter), and Lexa (Alycia Debnam-Carey). This cast of characters are some of the most compelling and diverse women on television today. They are each strong in their own way and contribute to some very original storytelling.

The 100 has a passionate fanbase and it’s never too late to join in. Like many, we started watching The 100 when it first premiered and never stopped. More viewers came to appreciate the series after it became avaiable for a full binge-watch on Netflix. If you haven’t been watching The 100, catch up on Netflix.

The 100 is a compelling drama with a unique worldview. The rich landscape of The 100 is constantly changing, creating unexpected storytelling with moral complexity. Stop making excuses and start watching.