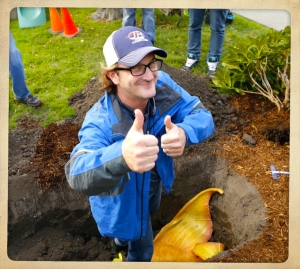 Season 11 of Supernatural has been a powerhouse due to great writing, acting, and directing. Episode 8 of Season 11, “Just My Imagination,” will be directed by former series guest star Richard Speight Jr. Speight previously co-directed the film North Beach (2000). He also wrote and directed the comedic short America 101 (2013).  This will be Speight’s first time directing an episode of Supernatural.

Speight’s last appearance as our favorite archangel Gabriel was in the Season 9 episode “Meta Fiction.” Fans remain hopeful he’ll make a reappearance in some form during Season 11, as the Winchesters need all the help they can get to defeat the Darkness. Speight has kept closely connected with the Supernatural franchise through the years. At Supernatural conventions Speight entertains fans as emcee, alongside his close friend Rob Benedict (who played prophet Chuck Shurley). Speight and Benedict also hosted the Supernatural panel at Comic-con 2015, bringing a lot of fun to the event. Speight and Benedict will also be showcasing Supernatural cast and crew in their new show Kings of Con, which provides a comical look at the convention world.

In the episode “Just My Imagination” Sam Winchester is visited by his childhood imaginary friend Sully (played by Nate Torrence). Sam is surprised not only to be seeing Sully, but to learn that he wants his help. The episode will include flashbacks showing the friendship between Sam and his imaginary friend. Sully isn’t the only imaginary friend who the boys encounter.

At the Toronto Supernatural Convention Jared Padalecki and Jensen Ackles talked about working with Speight as a director. Jensen described how seriously Speight took his directing responsibilities:

“I’ve always known Richard as Richard. Funny Richard, fellow actor Richard, funny guy, smart, short, comedy, …short.  It went from me knowing him that way and aways relating him that way, to seeing him go into dad mode. And then I’m like, ‘Oh, this is why his sons are so well-behaved,’ because he was herding us like kittens. He’s like, ‘Jared, Jared, I need you to come over here right now! Jensen, hey, let’s go, come on. I don’t have time for this, let’s go. We gotta go.’ I was like, ‘Who is this guy?'” 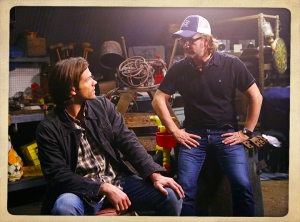 Padalecki joked about how Speight kept referring to them as their characters names while directing because he was so focused on the story. To see the whole story, told with the humor we’ve come to expect in Supernatural conventions, see this video from the convention.