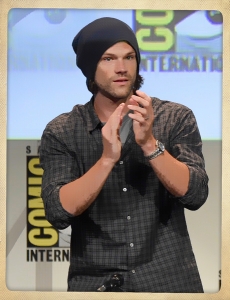 Jared Padalecki was moved by the support of his fans

The panel was newsworthy not only for its entertainment value, but also because of the show of support by fans. During the Supernatural panel, audience members held up specially made candles in an effort to show their support of star Jared Padalecki and his “Always Keep Fighting” campaign. He appeared moved by their encouragement, expressing his gratitude to audience members both during the panel and later in interviews. Padalecki began the “Always Keep Fighting” campaign earlier this year to raise money for TWLOHA, a program that helps those who struggle with depression, self-injury, suicidal thoughts, and addiction. Padalecki has shared that he has personally grappled with depression as well as having lost friends to the disease—notably his long-time stand-in Matt Riley. In May, Padalecki canceled appearances at Supernatural conventions in Italy and Australia, tweeting that he needed to be with his family and asking for words of encouragement, which resulted in an outpouring of support from fans. In appreciation for all that Padalecki has done to help others, fans at Comic-Con were able to give back to the Supernatural star in their own way.

As well as having some moving moments, the panel provided the audience of over 6,000 Supernatural devotees a lot of laughter and some insights into the show. Jeremy Carver talked about what we can expect for Season 11:

“This year, we are going to have a little bit more of an epic feel with a Big Bad and a real quest for the brothers to unite. It’s like a pre-Biblical story that’s never been told. Most importantly, I feel like the brothers are going to be really, really united in their need to take this thing down.”

Jensen Ackles expressed his excitement about getting back to the concept of Sam and Dean being united to fight a common enemy without one of the brothers being affected by a strain of evil, like drinking demon blood or bearing the Mark of Cain. It became clear that Season 11 might not be quite that straightforward when Jeremy Carver remarked, “One addition [to] everything that Jensen just said: I’m just going to say ‘-ish’.”

Andew Dabb is responsible for writing meta-episodes like “The French Mistake,” “The Real Ghostbusters,” and “Changing Channels.” When asked if Season 11 would bring any similarly themed episodes, Dabb shared that viewers can expect something fun in episode 4. Benedict asked if any fan favorites are coming back this season, later adding, “That was a personal question. … Am I coming back, or what?” Carver confirmed that fan favorites will return, “but they’re coming back in surprising ways.” When Sheppard asked if the hamster was coming back for next season, Benedict added, “He’s already done more episodes than me and Rich.” It was great to see Rob Benedict at the end of “Fan Fiction,” and we would love to see another Chuck Shurley appearance in Season 11, so fingers crossed.

Supernatural had just started shooting Season 11 prior to the Comic-Con panel. Ackles was directing the episode that was being filmed. He talked about what it was like to direct a cast who knows their characters so well:

“There’s some ease that comes with directing a cast in that I don’t really have to because they know what they’re doing, and you can kind of focus on trying to tell the story with the camera. So it’s fun, it’s challenging. One of the things I like doing, one of the things I like about directing, is the challenge itself—challenging myself to kind of think about the script in a different way, the whole right brain/left brain thing. So it’s fun and I’m enjoying it. And I’m lucky to have such an amazing crew that picks me up if I’ve forgotten a few things. And it’s big safety net. And it’s also amazing to have such talented people to work with … and that makes my job as a director easy, and it also makes my job more fun as an actor.”

Padalecki asked the audience how many had started watching Supernatural just this year, and who started watching it when it became available on Netflix. He noted that over 10 seasons, many fans have grown up with the show. Misha Collins described his own journey with fandom—“initially being kind of afraid of fans,” then starting to embrace them, and eventually collaborating with fans: Misha’s minions have worked together to make a difference through the organization Random Acts. Collins also pointed out that Supernatural includes many second-generation followers.

Rob Benedict agreed that younger viewers continue to be important allies of the show, bringing up Teen Choice nominations for Padalecki (TV Actor) and for Ackles and Collins (Chemistry). Richard Speight described the duo of Misha and Dean as “TV’s greatest team since Ernie and Bert,” but asked, “Why no Sastiel?” Collins blamed the lack of Sam/Castiel chemistry on height differences.

Supernatural is known for having a feeling of family on set. Benedict commented that when visiting the set, he sees a lot of the same crew and that it is like a family. Ackles agreed:

“A lot of people say its like one big family, and I think we can truly, honestly say that it really is. We’ve seen children grow up, we’ve seen people get married … we’ve been through births, though deaths, through marriages, though divorces … it runs the gamut of what we’ve seen and what we’ve experienced with this whole group of people. And there’s a majority of them that are still here, been there since day one, and that’s pretty special when you work in this industry—to have that time spent with that many people.”

Taunting the King of Hell

Misha: “I think I speak for the entire rest of the cast when I say that opportunities to have fight scenes with Mark are really satisfying. Sometimes we … we’d convince the directors and producers to let us shoot what we tell Mark are scenes, but they are never intended to air. We just pound on him a little bit, while the cameras pretend to roll. It’s pretty cathartic.”
Mark: “It’s called elder abuse.” 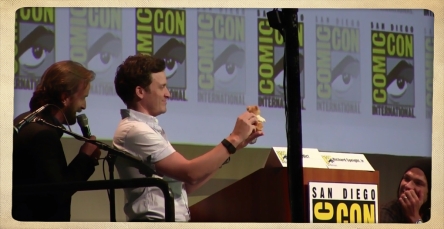 Having Benedict and Speight as moderators made for a fantastic Supernatural addition to the panel. Speight and Benedict brought out a toy hamster as part of their questions for Mark Sheppard, pretending the hamster was the one that played witch-turned-hamster Olivette. Not many actors get the chance to talk about their scenes with hamsters.

Rich, as hamster: “Hello Mark! It was great to work with you. You’re a very giving man.”
Mark: “I just want to say … I just want to say for the record, that was the best and kindest actor that I worked with in ten seasons.”
Rich, as hamster: “In all fairness, I was in a cage and I couldn’t escape, but thanks. Kind of tied my paws behind my back, if you know what I mean.” 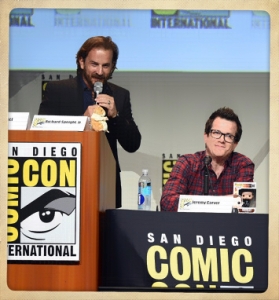 Jeremy Carver jokingly said “This is the worst panel ever” when fans put him on the spot about the death of beloved character Charlie Bradbury.

Supernatural has been criticized for its lack of strong female characters, and many viewers were upset when fan favorite Charlie Bradbury (Felicia Day) was killed off in last season’s penultimate episode, “The Prisoner.” A member of the audience asked about her controversial death, noting that “women have too often been used to further the plot of male characters.” Jeremy Carver stumbled a bit over how to respond, and his unconvincing explanation engendered some negative audience response. Ackles attempted to come to his rescue by pointing out that Charlie was originally a one-off character but was so well received that she was brought back for more episodes, adding, “We should be thankful for the time we got to spend with her.”

Each member of the panel talked about what monsters they were afraid of as kids and whether they had fought those monsters on the show:

Everyone on the Supernatural panel had a chance to share what scenes and episodes they most enjoyed in Season 10.

When asked what their favorite episodes were in Season 10, Carver, Padalecki, Collins, Ackles, and Dabb all said the 200th episode, “Fan Fiction,” was one they were most proud of. Ackles said that the episode he directed, “Soul Survivor,” in which Demon Dean gets cured, had a special place in his heart. Sheppard also really enjoyed “Soul Survivor,” in which his son Max played one of his minions. Andrew Dabb mentioned the episode “Black,” pointing out that Jeremy Carver does a great job creating season premieres that reset things and “start the fuse burning.”

Does all the talk of Season 10 at Comic-Con whet your appetite for the season premiere of Season 11 of Supernatural on October 7? Tell us if you watched the panel, either at Comic-Con or on YouTube, and share your favorite part of the panel. Ours was definitely the hamster.

6 thoughts on “Supernatural at Comic-Con 2015: Season 11, Fans Show Support, and will the Hamster Return?”