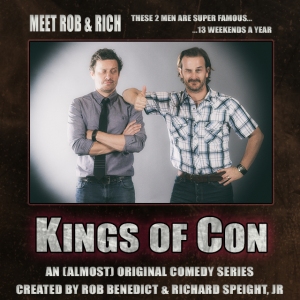 Have you ever wondered what it’s like to be a part of the convention circuit? Who hasn’t? Well, now is your chance to find out through the comedy series Kings of Con. Supernatural actors Rob Benedict (Chuck Shurley/Carver Edlund) and Richard Speight, Jr. (Gabriel) have launched an indiegogo campaign to fund their Kings of Con project through crowdsourcing. Kings of Con will have great appeal for those who have been to Supernatural conventions and other con events.

If the description of the project and introductory video is anything to go on, the series will be very entertaining:

It’s ‘Broad City’ meets ‘Party Down’ with the comedic honesty of ‘Curb Your Enthusiasm’ and Louis CK as Richard and Rob play caricatures of themselves cavorting through the con world: Rich, a thrice-divorced former actor whose love of the game is fueled by the faux fame he experiences at the hands of a gaggle of fans who still think he matters; and Rob, a recent divorcee back on the circuit to cover the costs of his failed marriage and stalled career. Scripted content mixed with improv, and Rich and Rob’s razor-sharp interplay all fuel the spirit of the show, backed by a supporting/guest cast of other ‘Supernatural’ players as well as established actors from across the Hollywood spectrum Rob and Richard have come to know over the course of their 20-year careers.

Through their crowdsourcing initiative, Speight and Benedict hope to raise $100,000 to cover the cost of the first three to five episodes. They are offering incentives that Supernatural fans will be very excited about. There are a lot of perks available at all different contribution levels, including:

The limited-edition rewards will go fast, as evidenced by the fact that the signed t-shirts and Skype sessions sold out on the first day of the crowdsourcing campaign.

Check out their indiegogo campaign if you want to learn more about the King of Con series, contribute, or just experience how funny these two guys are together.