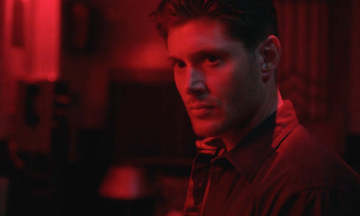 The “THEN” montage at the start of the “Soul Survivior” indicates that the show may be an angel-heavy episode. Let’s hope this means the grace storyline gets resolved. After the exciting end to the last episode,“Reichenbach,” we wouldn’t have been surprised if “Soul Survivor” started with Sam laying dead on the road somewhere. Disappointed, sure, but not surprised.

We get right to business—the family business, opening with Sam preparing to cure Demon Dean. Dean is locked up in the Men of Letters bunker. It’s kind of impressive that Dean got him down there by himself. Those handcuffs are pretty amazing, but then again they did keep the King of Hell captive for a while.

Good one, Sam. Sam gives him the holy-water-and-blood treatment and Dean gets all super demony. Pretty much scarier than any demon we have seen on Supernatural so far. Run away Sam! We almost ran into the other room. 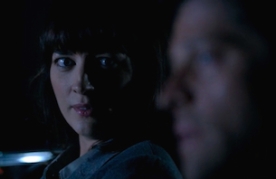 Hannah is worried about Castiel

Castiel and Hannah, ever in the crappy Lincoln, are on the road. Poor Cas is still driving despite his low grace and sleepiness. Let Hannah drive already! We are starting to think angels are pretty sexist when it comes to driving. Or Hannah is a real jerk. Cas and Hannah have an amusing discussion about human conventions.

Hannah: “How are you holding up?”
Casitel: Fine.
Hannah: “You say you’re fine, but you don’t look fine.”
Castiel: “That’s what the humans do. They say they’re fine. And even if I don’t look it, you say I look well. And that way we avoid talking about something we can do nothing about.”

Castiel and Hannah are on the road in order to help Sam with Dean. Hannah complains about the Winchesters. Angels love to complain about the Winchesters. It must be all they talk about in Heaven. Cas sounds like he is prepared to kill Demon Dean. Hannah says she is worried about Castiel. She is losing her awkward angelness more and more all the time. Poor Hannah might even be in love, if such a thing is possible. 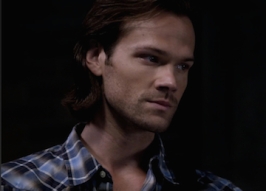 Sam attempts the ritual to cure a demon

Back at the bunker, Sam is continuing with his “cure a demon” treatment. It seems unpleasant for everyone. Dean tries to bully and shame his little brother, saying, “I know what you did when you were looking for me and I know how far you went. So let me ask you, which one of us is really the monster?” We haven’t seen the backstory yet, but we are pretty sure that Dean is the monster.

Flashback to a bar where Lester, the unpleasant dude from last episode that wanted his wife killed, is getting drunk. Then Sam shows up. What the hell? So apparently Sam convinced Lester to sell his soul to the crossroads demon so he could track down Crowley. This is what Dean is claiming is so monstrous. We might be more inclined to agree if Lester was likable in any way. In Sam’s defense he did attempt to stop the transaction before Lester completed the deal for his soul; Sam was just too slow. And Lester didn’t actually lose his soul because Dean screwed up the contract. So there.

Dean continues trying to make Sam feel bad. How much of a monster can Sam be when he feels so guilty all the time? Dean: “Let me ask you this, Sammy. If this doesn’t work, we both know what you gotta do to me, right? You got the stomach for that, Sam?” Is Dean taunting Sam in order to get him to stop the cure, or so that Sam will just kill him instead? Who can understand Demon motivation? 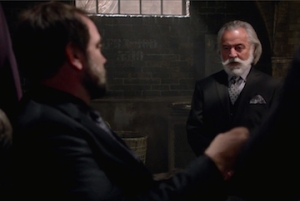 Crowley is back in Hell. At least we think it’s Hell. Administrative Hell—lots of contracts and lines. A minion, who looks suspiciously like Santa, tells Crowley that there is a line of supplicants outside waiting to see him. Crowley: “It’s Hell. You wait. It’s what you do.” Hell-Santa tells Crowley that it has been reported that Castiel is losing his grace and suggests that this would be a good time to kill him. Crowley tells Hell-Santa to have Castiel followed. Then Crowley daydreams about Dean for awhile, which is hilarious. Pining for better days. His reverie is interrupted by an ambitious minion:

“Your misadventure with the older Winchester was quite the topic of speculation. If you forgive my boldness, I could be your wingman. … I too love to party, and I do love the ladies, and the classic rock’n’roll. Most importantly, I can debauch by your side without being a personal embarrassment.”

Crowley snaps his fingers and the minion turns to black ash. This audacious minion was fantastic and we think he was dispatched much too soon. 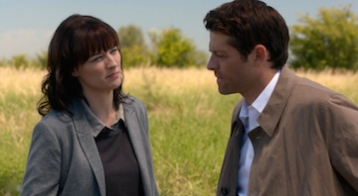 Castiel tells Hannah he will not take another angel’s grace

Hannah and Cas are standing on the side of the road after getting lost. It seems Hannah is neither good at driving or reading a map. Hannah tries to convince Castiel that he could take another angel’s grace. They have a super awkward moment where they accidently touch each other. We are hoping worried that this is leading to Hannah sacrificing her grace for Castiel. Cas gets a call from Sam. Dean must have gotten Sam all riled up with his taunting and screaming. Sam is worried that the ritual either won’t work or, alternatively, will kill Dean. Cas’s response is not reassuring, but realistic, as we expect from him: “Sam, he’s not your brother—at least not now. You have to be prepared for—” Sam gets the message and interrupts, “Killing my brother.” Deep stuff.

Dean appears passed out when Sam returns to him. We are pretty sure he was faking though. He is evil, after all. More taunting, which is kinda boring. We have heard this sort of goading before (you killed Mom; I am sick of babysitting you; Dad brainwashed us; blah blah blah). 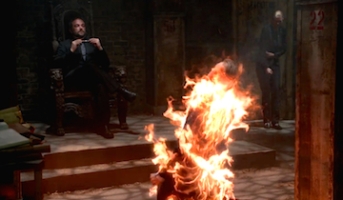 A demon protest in Administrative Hell

Meanwhile back in Hell, a demon protests Crowley’s rule through self-immolation via holy oil and flame. Crowley murmurs to himself, “Did not see that coming.” Poor Crowley – being the King of Hell is probably not all it cracked up to be.

Cas and Hannah have arrived at Levi’s Lil’ Gas and Grocery. Cas is calling Hannah out on her crush: “Emotions, feelings, they’re dangerous temptations.” He’s a heartbreaker. Hannah’s time with Castiel has made her interesting enough to retort, “How very biblical, Castiel.” Snap! Hannah goes into the store. After looking on the shelves for who-knows-what, she finds that Levi’s clerk has been angel-killed (you can tell because he has angel-eye). The rogue angel Adina is in the store waiting for Hannah and Castiel in order to avenge Daniel, who was killed by Cas in the episode “Black.” She beats up Hannah, who was very wimpy in their angel girlfight, and then starts thrashing the weakened Castiel. 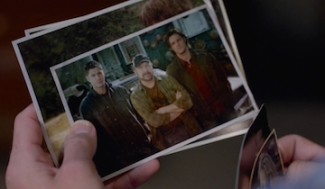 Sam looks through the Winchester Family photos, including one of the boys with Bobby Singer 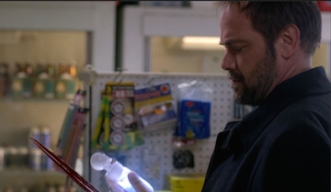 By the Power of GraceSkull!

Outside Levi’s Lil’ Gas and Grocery, Crowley is standing over Castiel as he struggles to consciousness. Adina is beating up Hannah, but then Crowley is right behind her. Crowley takes Adina’s grace and kills her, saying, “Why can’t you people just sit in clouds and play harps, like you’re supposed to?” Luckily Crowley carries a little glass grace container with a skull on top for such occasions. We definitely want one of those for Christmas, and if it happens to have grace in it, all the better. Crowley gives the grace to Cas!

Crowley to the rescue

Now that was something we didn’t expect. Castiel weakly tries to refuse, but Crowley points out, “Yes it’s her, but she was killing your girlfriend. Your hands are clean.” Adina’s grace gives Cas a new lease on life and he is transformed back into the shiny Cas we know and love. Crowley wants Castiel to go deal with Dean, even if it means killing Dean. Crowley says, “I’m not sentimental.” What a liar. 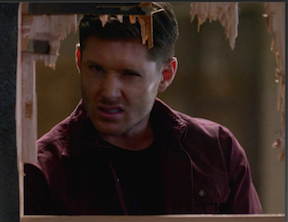 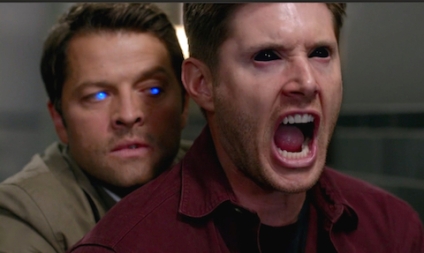 Angel versus Demon, always a classic

With Castiel’s help, Sam continues on with the cure a demon ritual. The ritual remedies Dean’s demon-eye and it appears to have cured the demon. We are not sure if we really believe Dean is cured. Maybe just keep him tied up for a while, just in case, because Demon Dean is terrifying. 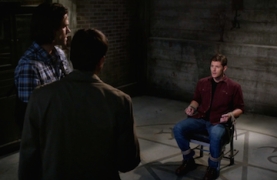 Later Sam and Castiel are talking and Cas points out that Dean still has the Mark of Cain. That’s a good freaking point, making us even more suspicious about his recovery.

Cas goes to talk to Dean, who is looking through the family pictures in his bunker bedroom. Cas and Dean chat. Dean expresses his Winchester guilt. Dean seems normal, but we have our doubts. Sam completed the ritual, Dean is de-demonized, Cas is in angel remission, and everyone feels guilty about something. Yeah, things appear pretty normal right now, except for that whole Mark of Cain thing and Castiel’s ever diminishing grace. 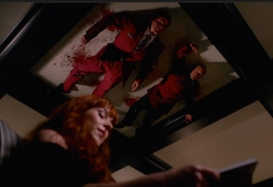 Demon, witch, a little of both perhaps?

Supernatural ends on a mysterious note, with an unknown character who likes to kill old-school style, à la the yellow-eyed demon. There’s a new evil in town and we can’t wait to see what happens.

“Soul Survivor” was directed by Jensen Ackles. This is Ackles’ fourth time directing a Supernatural Episode, having previously directed “Weekend at Bobby’s” (S06E04), “The Girl Next Door“(S07E03), and “Heartache” (S08E03). It can’t be an easy task to direct this group of jokesters, especially when starring in an episode. As the name would suggest, Bobby (Jim Beaver) was the star of “Weekend at Bobby’s” episode. The plot of “The Girl Next Door” centered around Sam (Jared Padalecki). Ackles had a major role in “Heartache,” but the episode did not demand such intense acting for Ackles as “Soul Survivor” did. Some of the outstanding performances of the cast, particularly the interaction between Castiel (Misha Collins) and Hannah (Erica Carroll), indicate Ackles’ directing skill. The strong directing combined with an outstanding starring performance of “Soul Survivor” showcases Jensen Ackles’ talent.

“Soul Survivor” neatly ties up some of Supernatural’s storylines of last season, albeit temporarily. We look forward to some stand-alone episodes while some of the no-longer-so-urgent Heaven and Hell issues fall to the backdrop for a while.