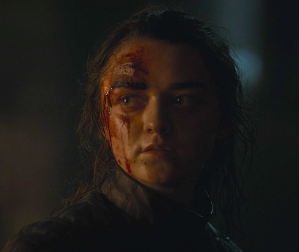 “The Long Night” brought some closure in this final season of Game of Thrones. Leading up to the battle of Winterfell, there were an abundance of predictions as to what would happen—some based on prophecies from the book series and others arising out of fan theories. With 19 months between HBO seasons and 18 years since George R.R. Martin’s last Song of Ice and Fire book, rampant speculation was inevitable. Being one of the most discussed and dissected television shows today, Game of Thrones is certain to disappoint some of those anticipating a different narrative. The extensive media surrounding this popular series presented myriad potential outcomes prior to “The Long Night,” yet Game of Thrones still manages to subvert our expectations.

Jon Snow was unable to reach the Night King, Daenerys Targaryen’s attempt to smite him with dragonfire failed, and the army of the dead overwhelmed the forces defending Winterfell. Brave warriors Jaime Lannister and Brienne of Tarth were unable to do more than keep themselves and each other alive, while Jorah Mormont ultimately could only keep the Dragon Queen safe. The brilliant minds of Tyrion Lannister, Lord Varys, and Samwell Tarly did nothing to change the outcome of battle. It was only through the efforts of the smallest assassin, Arya Stark, with the unexpected assistance of those once included on her kill list, that the Night King was defeated.

“The Long Night” doesn’t follow a typical hero trope with Jon saving the day, nor does it embrace the more unusual theories like Bran warging into a dragon, Daenerys turning into the ice queen, or Nymeria and her pack showing up. Employing a twist that was unexpected yet straightforward, Arya’s extensive training provides the ultimate payoff. In the last few seasons of Game of Thrones, Arya has been all about vengeance, focusing on her kill list. In Season 8, Arya’s list has been set aside as she prepares to defend her family home. The Stark bonds run deep in “The Long Night”: Arya arms Sansa before sending her sister to the crypt; Jon leaves Daenerys on the field in an attempt to reach Bran; Theon gives his life guarding the family he once betrayed; and Arya ultimately saves her brother, Winterfell, and the world of men.

“The Long Night” manages to keep us distracted from Arya as hero by injuring her severely in the fight. With serious head trauma, Arya falls into fear and panic. Though it was hard to accept Arya as helpless as she stumbled through the halls of Winterfell, even in her injured state, it provided cover for her ultimate fate. It felt as though we were simply following each of the Stark siblings as their family home was under attack. When Melissandre reminds Arya of her Braavosi training, she seems to come out of her fog. With the injury misdirect, as well as the expectations built around Jon Snow as hero and foe of the Night King, Game of Thrones flips the script with Arya killing the Knight King. It’s not Arya’s specially forged dragonglass weapon that saves the day, but the Valyrian steel knife once used in Bran’s attempted assassination.

Daenerys Targaryen may have been unable to stick to the plan of waiting for the Night King to appear, but she and Jon did complete most of their tasks. They found and attacked the Night King. Jon attacked him in the air, with Rhaegal tearing his ice dragon apart. Daenerys found the Night King on the ground and Drogon covered him in dragon fire. Luring in the Night King in order to kill him with dragon fire was the plan, but it didn’t work. At the war council, when Arya asked if dragon fire would kill the Night King, Bran had been non-committal: “I don’t know. No one’s ever tried.” 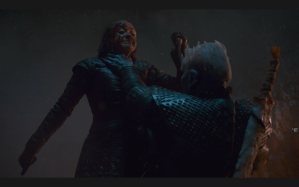 Arya being the one to kill the Night King doesn’t take away from Jon’s story. It’s refreshing to see a male character used as a foil, diverting the audience in order to build suspense and create surprise. Up until the final moment, the only hint of Arya’s presence is the White Walkers’ hair moving as the air shifts in the godswood. It was a well written and subtle narrative, filmed and directed in a way that heighted every aspect of the final battle, leading the audience to believe that all hope is lost, which culminates in a moment that is both exciting and stunning. It is shocking both because the Night King is killed and because it is Arya who kills him.

Deaths in “The Long Knight”

Theon Greyjoy (Alfie Allen) ends up being a good man

Ned Stark provided the lesson in Season 1 that anyone can die in Game of Thrones. Eddison Tollett, Lyanna Mormont, Beric Dondarrion, Jorah Mormont, Theon Greyjoy, the Night King, and Melisandre all die in “The Long Night.” It also appears that most of the Dothraki and many of the Unsullied don’t survive. Sam manages to live because of Edd and because he then cowered inside. Sandor Clegane was helped by staying out of the fray for a while, both when he was hiding in terror and when he was barricaded inside a room in Winterfell. Brienne of Tarth and Jaime Lannister helped each other to survive the battle. We anticipated Tormund would die simply because of the complications of his character arc, but he does have the most experience surviving both the cold and the dead. Podrick Payne and Gendry both surviving is more surprising, especially since the actor who plays Gendry had to shave his head because the audience had a hard time telling them apart.

Even though there hasn’t been an episode with so many deaths of well-known characters since The Winds of Winter, some were surprised there weren’t more. With whole armies wiped out it may seem unlikely that so many main and supporting characters would survive, though very few of the established characters died in the midst of past battles. The expectation that a lot of significant characters would die was certainly propelled by the many death watch predictions in anticipation of the battle. The deaths in this battle, both in terms of who died and how many died, was bound to be controversial. An overabundance of death would lead to complaints of unwarranted mortality and criticism that some characters didn’t get their due. On the other hand, it seems that while only a handful of named Westerosi characters were killed, an entire people were destroyed as the Dothraki swords were extinguished by the dead.

Each of these deaths contributed to the story in a meaningful way. Edd saved Sam, who then promptly fell apart. Beric and Melisandre each fulfilled their purpose in helping Arya meet her own destiny. Some deaths were felt more than others, such as Theon’s moving sacrifice and Lyanna Mormont’s extraordinary end. Jorah’s death may not have felt as emotional as expected, but it was glorious for him to go out saving his queen. His death serves the story moving forward, leaving Daenerys with less support after losing her most loyal knight, her Dothraki army, and half of the Unsullied. Few anticipated that the Night King would die midway through the last season, but if Hardhome and the Last Hearth showed us anything, it’s that had the Night King lived, no humans without a dragon to fly off on could have survived Winterfell.

Game of Thrones gave this 82-minute battle episode, “The Long Night,” moments of beauty, horror, redemption, sorrow, hopelessness, and surprise. “The Long Night” had some problems—namely, that it was very dark, the dragon scenes above Winterfell were confusing, and the scene with Arya in the library went on too long. The return of Melisandre added much to the episode, bringing a moment of hope as she lit the Dothraki swords, the element of faith as she prayed above the trench, and a sense of closure as she walked into the sunrise to die. The biggest takeaway from “The Long Night” was the introduction of Ayra Stark as hero and savior—an unexpected but fitting role for the fiercest and most formidable of the Starks. Though the question of how this decimated army of unnatural allies will face Cersei looms large, take a moment to enjoy this Game of Thrones win, both in terms of story and production, with “The Long Night.”