Nobody puts Cersei Lannister (Lena Headey) in a corner

Cersei becomes Queen of the Seven Kingdoms, while Jon Snow is declared King in the North. Meanwhile, Daenerys Targaryen heads towards Westeros with some new allies to claim the Seven Kingdoms for herself. Wonder what the Night King is up to while all this is going on.

The Trial of Cersei Lannister

“The Winds of Winter” opens with King’s Landing preparing for a big trial. We won’t lie; if Game of Thrones were strictly about King’s Landing, we’d probably stop watching. But then Cersei goes and blows up the Great Sept with wildfire. It was a pretty impressive way to finally close the book on the increasingly tedious Faith Militant and High Sparrow story. It was definitely the most exciting trial we’ve ever seen. Initially we‘d hoped that all of King’s Landing would be destroyed by the highly explosive wildfire, but when we saw Cersei rocking that Michael Jackson-styled dress we reconsidered.

Cersei  as the Evil Queen

We don’t want to root for the increasingly wicked Cersei, but Game of Thrones somehow manages to get us cheering on the sidelines of evil. Cersei is busy wine-boarding Septa Unella, because it feels good, and she fails to console her devastated son. In a shocking turn of events, King Tommen throws himself out the window and Cersei becomes the queen. At this point, who’s going to challenge her? After all, she’s bad, bad, really, really bad.

Jaime returns to King’s Landing to find the Great Sept in ashes, his son/nephew dead, and his megalomaniacal sister being crowned upon the Iron Throne. It appears that even in her brother’s eyes, Cersei has gone a bit far. Jaime’s seen royalty gone mad with power and vengeance in the past, so he knows the look. He did slay his former king to prevent him from using wildfire. But hey, Cersei only used it on everyone in the Grand Sept and the surrounding neighborhood, so no worries.

It appears that the Faceless Men are not the only ones skilled in the art of deception and assassination. The little birds Maester Qyburn inherited from Varys become creepy killer birds, taking turns stabbing Grand Maester Pycelle, not to mention Lancel Lannister. If you didn’t think Maester Qyburn was sketchy before, his little child death cult probably puts it over the top. The Order of the Maesters previously stripped Qyburn of his chains, but look at him now—Hand of the Evil Queen.

Before Jaime leaves for King’s Landing he’s forced to endure the celebration of the Frey-Lannister alliance. Walder Frey cozies up to Jaime: “Here we are now—two kingslayers. We know what it’s like to have them grovel to our faces and snicker behind our backs. Fear is a marvelous thing.” Jaime points out that people fear the Lannisters, not the Freys. He doesn’t have much respect for Walder Frey—but who does?

After the celebrations, Walder Frey is served by a girl he doesn’t recognize. She turns out to be Arya Stark wearing the face of another.

Assassination and face removal weren’t the only skills Arya learned at the House of Black and White, because she offers Walder Frey a flaky pastry chock-full of his Frey descendants. With the flair of Inigo Montoya, Arya tells Walder, “My name is Arya Stark. I want you to know that. The last thing you’re ever going to see is a Stark smiling down at you as you die.” Arya is wearing faces, but keeping her vision. It appears the Many-Faced God is now Team Arya.

The Tower of Joy 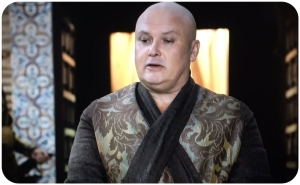 Sure, we could ask pesky questions like how did Arya get to Westeros so quickly, or how did Varys managed to make a round-trip visit from Meereen to Dorne that would seem to require a TARDIS? But let’s not get bogged down with issues of time travel. Especially since Bran Stark (or, as he likes to remind Meera, the Three-eyed Raven,) does actually seem to be able to travel in time, or at least visit past moments.

Uncle Benjen drops Bran Stark and Meera Reed at a Weirwood tree, telling them that the Wall is warded to prevent the dead from passing through. Since he’s half-dead he can’t take them any further. As he departs, he tells them, “A great war is coming and I still fight for the living. I’ll do what I can, for as long as I can.”

Bran takes a moment to commune with the tree. He revisits the moment from “Oathbreaker” when a young Eddard Stark arrived to rescue his sister at the Tower of Joy. The Starks believe that Rhaegar Targaryen had kidnapped and raped Lyanna. When Ned arrives to find her sister in her birth blood, she makes him promise to protect the baby. We see the dark-eyed baby, and in the next scene we see the dark eyes of Jon Snow. The assumption is that Jon Snow is the baby of Lyanna Stark and Rhaegar Targaryen. Game of Thrones didn’t go so far as to state outright that Rhaegar is the father or that the baby grows up to be Jon Snow, but the implication is there.

Jon Snow, King in the North

Davos Seaworth (Liam Cunningham) is not happy with the Red Woman

Jon Snow barely gets a moment to enjoy his victory, or regret his poor battle choices, before Davos Seaworth arrives to narc on Melissandre for murdering Shireen. Jon must have a soft spot for the woman who brought him back to life because he banishes Melissandre rather than executing her. We can remember when we felt just as angry and indignant as Davos towards Game of Thrones for including child sacrifice in their narrative, but it all seems so distant now.

Meanwhile, Petyr Baelish and Sansa Stark are each trying to manipulate the other. Though Sansa spurned his advances, we kinda think Littlefinger is winning. He plays on her pride and arrogance to stir her doubt and jealousy of Jon Snow. Despite Jon’s attempt to reinforce the Stark family values with Sansa, she gives Littlefinger a knowing look when the “motherless bastard born in the South” is embraced by the Northern Houses.

And, oh yeah, with some help from the always amazing Lady Mormont, Jon Snow becomes King in the North. The bold Lady Mormont shames the Lords who sided with the Boltons and adds, “But House Mormont remembers. The North remembers. We know no king but the King in the North whose name is Stark. I don’t care if he’s a bastard. Ned Stark’s blood runs through his veins. He’s my king from this day until his last day.” The rebel houses are contrite and all pledge to support Jon Snow as King in the North. All the men call out “King in the North,” just as they once did for Robb Stark. Let’s hope it goes better for Jon.

It only took six seasons, but Daenerys Targaryen is finally on her way. She leaves behind Daario Naharis and the Second Sons to safeguard Meereen, and makes Tyrion Lannister the Hand of the Queen. As well as the Dothraki, the Unsullied, and her dragons, Daenerys has some new Westerosi allies. She has already partnered with Yara Greyjoy, which gained her some well-needed transportation. And now, thanks to Varys’ time-traveling trip, Daenerys is receiving support from Dorne and Highgarden.

There is a mass of ships heading towards Westeros. These Dothraki have adjusted to sea travel much better than Daenerys’ original seasick posse. Maybe the Ironborn shared some tricks. It’s fun to see the ships, and watching the dragons weave in and out of the sails is amazing.

Sam, Gilly, and Little Sam have made it to Old Town. The distractions of the free folk, White Walkers, and the death of Maester Aemon has meant that the Citadel hasn’t gotten the latest scoops on Castle Black. Sam’s reception is a cold one, which is not helped by the fact he brings a woman and child with him. When Sam goes to wait in the library, it’s like he’s been shown the Holy Grail. The Citadel is nerd heaven, but it may not be so great for Gilly and Little Sam.

The Winds of Winter Review 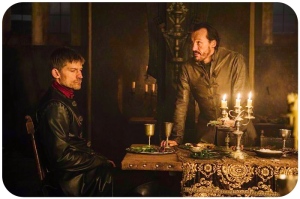 In “The Winds of Winter,” Game of Thrones reminds us again that revenge can be very satisfying. Season 6 ended on a surprisingly high note, which we appreciated. We saw two new monarchs rise from the ashes, and the gods only know what Daenerys will bring to Westeros, but it will be fun to watch. The Season 6 finale of Game of Thrones gives us the exciting drama, skilled acting, and great special effects that keep us coming back for more. Now we just have to get through the next 42 weeks.