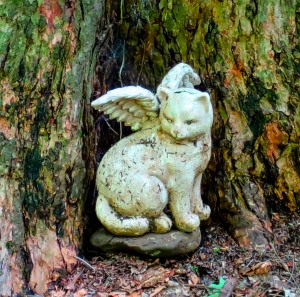 Lily Dale Assembly, a Spiritualist community in Western New York, is home to the oldest known cemetery devoted to companion animals in the United States. It sits in the beautiful Leolyn Woods, an old-growth forest, at the back of the Assembly grounds. Spiritualists believe that mediums can communicate with people who’ve passed on to the afterlife. Just as people remember the friends and family they’ve loved, many also seek a way to memorialize animal companions who have given them so much comfort and joy in life. The pet cemetery serves as the final resting place for the pets of many Lily Dale residents, as well as memorializing other animals that have passed on to spirit. 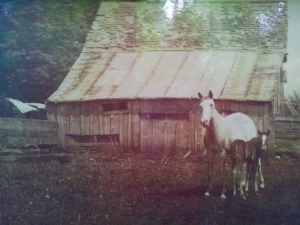 The Lily Dale pet cemetery was originally created in 1900. At that time, there was a cherished team of horses who helped to keep the grounds running. While hauling ice out of Cassadaga Lake for later use in warmer months, the horse Topsy tragically fell through the ice and drowned on February 13, 1900. After being recovered from the frozen lake, Topsy was buried in Leolyn Woods. Shortly after, others began to memorialize their own companion animals in the same area.

The connection between people and their pets is a powerful one. Because animal friends provide peace and joy in life, human companions want to honor them in death. The beloved animals interred or memorialized on the grounds are remembered with a variety of monuments, from rocks and plaques to headstones and statues. The Lily Dale pet cemetery remains a sacred place for all to visit and remember animal friends who gave their love and companionship.

Pets are no longer buried at the cemetery in order to keep the surrounding forest pristine, but they are still honored. In 2012 a new annual tradition was created: the Lily Dale Pet Remembrance, which will take place on July 26. The annual ceremony pays tribute to the pets memorialized at the Lily Dale pet cemetery, as well as other animal companions. Pets are honored through a photograph and short prayer or story that is shared during the ceremony.

The Remembrance Board showcases pictures of beloved pets throughout the year. There is a box in which you can leave a photo of your family pet to be posted. The pictures memorialize animals companions who have passed on to spirit. 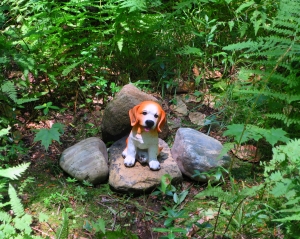 The pet cemetery is easily accessible when visiting Lily Dale Assembly, which is open to the public. During the summer season, from the end of June to the beginning of September, there are entrance fees to get into the grounds. Admission to Lily Dale Assembly is free the rest of the year. The pet cemetery provides a memorial for the special place animal companions have in our hearts in both life and death.

In this series, we explore different facets of Lily Dale Assembly and Spiritualism: