It’s been two months since we attended the Las Vegas Supernatural convention (March 10–13, 2016), but we’re just getting over it. The Vegas Con was a marathon of Supernatural fun—the only US con that is a full four days long. Here’s a rundown of the stars who appeared at #vegascon 2016 and some of the weekend’s highlights.

Arriving Wednesday for pre-registration gave us a chance to leisurely check out all the great booths in the vendors’ room.  Misha Collins’ Random Acts was also there to collect for HELP of Southern Nevada. Just a month earlier, Misha and Jensen Ackles, in cooperation with Random Acts and con presenters Creation Entertainment, ran a “You are Not Alone” t-shirt campaign that led to the launch of the SPNFamily Crisis Support Network in partnership with IMAlive and To Write Love on Her Arms. (Jared Padalecki launched a similar t-shirt campaign, #AlwaysKeepFighting, in 2015.) Wednesday night was also pretty much the only free time available to leave the Rio All-Suites Hotel and get a glimpse of the rest of Las Vegas before the con got fully underway.

Richard Speight, Jr. (Trickster/Gabriel) took his place as emcee, but with a beard, a cold and without his buddy Rob Benedict (Chuck Shurley/Carver Edlund) there to act as sidekick. Louden Swain’s Michael “Robot Mike” Borja (bass) and the rest of the band did their best to fill Rob’s temporary vacancy. Thursday’s guests included Alaina Huffman (Abaddon), Brock Kelly (Young Dean Winchester), and Matt Frewer (Pestilence) at his first Supernatural convention. We were also treated to an afternoon mini-concert by friend-of-the-show Jason Manns, who has appeared at dozens of Supernatural conventions going back as far as 2007.

Thursday night gave us the opportunity to see the premiere of Supernatural Fandom: The Movie, which had some genuinely moving moments. Filmmakers Mitch and Clif Kosterman, as well as Executive Producer Jason Fischer, happily answered questions and signed autographs afterward. But we needed to make our way to the Gold cocktail party, where the day’s guests went from table to table judging a centerpiece contest.

First thing in the morning on Friday, Richard, still a bit under the weather and without Rob to keep him balanced, went off on an increasingly demented tear culminating in his starting of a new religion. Over a music bed of Louden Swain playing “Sympathy for the Devil,” The High Church of the Holy Dick was born. It really was something to behold. But the day was only getting started.

I have these weird feelings for @dicksp8jr and I'm not really sure how that happened.

You've been touched by the spirit. Welcome to the High Church of the Holy Dick. https://t.co/xSVO4ts83c

Friday’s first guests were “The Sheriffs,” Kim Rhodes (Sheriff Jody Mills) and Briana Buckmaster (Sheriff Donna Hanscum), who were in full Vegas party mode and a lot of fun. Next up was Colin Ford (young Sam Winchester). Richard Speight’s mind was blown at the end of Colin’s panel by the realization that Colin is one of the voices of Jake from Disney Junior’s Jake and the Never Land Pirates—a favorite of Rich’s kids.

Fan fave Osric Chau (Kevin Tran) took the stage next in costume as Captain America and was joined by Gil McKinney (Henry Winchester). They were followed by Jim Beaver (Bobby Singer), a favorite of ours.

Friday was Karaoke night, a party not to be missed, making for another fun 14-hour day with the convention’s second half still to come. Caffeinated beverages will need to be procured on Saturday morning!

Saturday morning gave us second appearances by Gil, Osric, Jim, and Kim, taking the stage in pairs. The affection between these actors is easy to see when they share Q&A panels.

Following the costume contest, we were delighted when Rob Benedict finally showed up—we now know he was off playing God (filming Episode 20). Richard did an amazing job as solo emcee, but we were all glad to see Rob back on the SPN con stage, his home away from home. 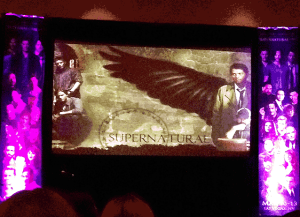 The afternoon’s guests were Mark Sheppard (Crowley), Matt Cohen (Young John Winchester) and Misha Collins (Castiel). Mark’s young son Will took the stage in Mark’s place, and for the first several minutes answered questions from the audience as Mark, which was genuinely hilarious.

Equally hilarious was Misha’s turn onstage. Even wearing a grievously torn and dirty t-shirt under his sport coat, his presence lights up a room. We were particularly interested to hear about how he felt playing Lucifer (usually played by Mark Pellegrino) this season:

“Mark Pellegrino is probably the best actor we’ve had on the show. He’s done such an awesome job with Lucifer that there’s actually no way I could measure up, so they were just setting me up for failure. So that was a little bit nerve-wracking, actually, for me. But I went over to Mark Pellegrino’s apartment … and cheated. The first scene, I was like, ‘Hey, Mark, I’ve got a funny question. Could you show me exactly how you would do this?’”

Highlights of that evening’s big concert, the Saturday Night Special featuring Louden Swain and the weekend’s celebrity guests, included Osric Chau and Gil McKinney’s duet of Wiz Khalifa’s “See You Again” and Louden Swain with Mark Sheppard on drums performing the Allman Brothers’ “Whipping Post.” Rob Benedict became increasingly emotional as the music turned to the more sentimental for the last few songs of the evening: Jason Manns and Rob singing Leonard Cohen’s “Hallelujah,” followed by Rob’s own song “She Waits” and then the show-closer “A Little Help From My Friends” sung by the whole ensemble. We haven’t been to a lot of other convention-type events, but we feel certain the Saturday night concerts at the Supernatural conventions are a unique experience.

By the last day of the convention, it felt like we had been there for weeks—like this was just our life now, as Richard concurred from the stage that morning—“Fourteen days ago this convention started. I was clean-shaven. And now here we are. Sweet merciful crap, this is a long one.” But the day was just beginning. Jake Abel (Adam Milligan) was the first guest of the day, and cheerfully speculated on ideas for bringing Adam/the archangel Michael back to the show at long last.

Jared Padalecki (Sam Winchester) and Jensen Ackles (Dean Winchester), aka J2, then took the stage, and they were as funny and delightful as ever, though Jared abused and broke his microphone—twice. The convention closer was Ruth Connell (Rowena), who wandered the convention floor, handed out hotel room toiletries and addressed every questioner with the query, “What’s your name? Where are ya from and what do ya want?” We were glad to see her—not just at her Q&A, but also the night before at the Saturday concert (singing Dusty Springfield’s “Son of a Preacher Man”), and just a short time later, back on the show!

This is just a small sampling of the non-stop action of Vegascon 2016. Hello to all the new friends we met there—hope to see you in San Francisco in December and Honolulu in 2017!