The Banshee is an ominous spirit of the Irish fairy realms whose presence foretells the loss of a life. This “woman fairy” (from bean, a woman, and sidhe, a fairy), announces an imminent death with her mournful and terrifying keening. When she can be seen and not just heard, the Banshee usually appears as a beautiful woman, often clutching a hairbrush. In Scotland she is bean nighe (the Washerwoman, whose spectral form can be seen washing the bloody clothes of the soon-to-die), while in Wales she is Gwrach-y-rhibyn (Hag of the Mist).

The Banshee is sometimes seen along with a cóiste-bodhar (coach-a-bower), pulled by headless horses and driven by her fellow Celtic death omen, the Dullahan. Although like the Dullahan (and the Cluricaun), the Banshee is usually classified in lore as a solitary fairy, it has been suggested that she may in fact be a sociable fairy who has only become solitary due to her constant sadness—unlike most solitary fairies, she is generally not malevolent, but only foreboding and frightening. END_OF_DOCUMENT_TOKEN_TO_BE_REPLACED

The Dullahan is a headless horseman from the Unseelie Court of the Irish fairy realm. Although in “The Legend of Sleepy Hollow,” the mysterious rider is implied to be only a man in disguise, the early American short story’s antagonist is modeled from legends of the Dullahan. 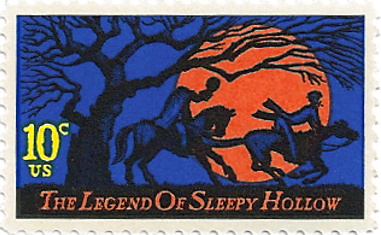 The Dullahan carry their grotesque, rictal heads with them, either aloft in their hands or in their saddlebags. (They in fact see through the heads’ eyes, though their sight extends vastly farther than human eyes, and through the pitch black of night). Unlike Death itself, the Dullahan rides a steaming stallion of jet black. The Dullahan maintain classic hallmarks of a Death Omen—if it bears a lantern, it is made of human skull. If it wields a crop, it is the spine of a corpse. In some parts of Ireland the Dullahan is seen in a drawn coach rather than on horseback, with a carriage of skin and wheel spokes of bone. Whatever the conveyance, it is surely a terrifying sight. END_OF_DOCUMENT_TOKEN_TO_BE_REPLACED