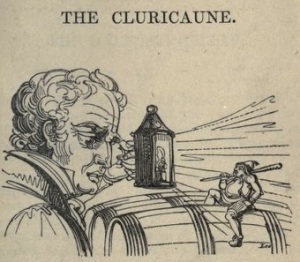 Wood engraving from Fairy Legends and Traditions of the South of Ireland (Croker).

You’ve heard of the Irish leprechaun, but do you know about the Cluricaun? Although considered by some to be the same creature, just more liquored up, the Cluricaun is among the “solitary” class of creatures of Faerie, who “are nearly all gloomy and terrible in some way” (Yeats). Like other Irish elvish creatures, Cluricauns are said to be descended from the Tuatha Dé Danann. The naughty drunkard of the family (called Clobhairr-ceann in Irish), the Cluricaun is a trickster, thief and mischief-maker who inhabits beer and wine cellars. He (for, as with leprechauns, there is no lore of the existence of females of the species) is known to go out drunk-riding on the backs of hapless dogs and sheep on moonlit nights. His face is flushed with gin blossoms and his clothing is neat and bright, and often includes blue stockings, gold-laced hats and silver-buckled shoes—but rarely an apron or tool belt. Unlike some other, more industrious creatures of Faerie, a Cluricaun doesn’t work!

The Cluricauns’ occupations are robbing wine-cellars and riding sheep and shepherds’ dogs for a livelong night, until the morning finds them panting and mud-covered.

The Cluricaun at Home 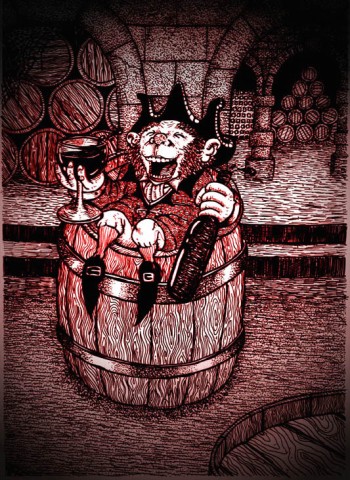 If a Cluricaun takes up residence in your wine cellar, although helping himself to its contents, he will otherwise endeavor to keep it safe and prevent your casks from leaking—unless he is slighted or takes offense. A surly Cluricaun will sour your wine, and worse. Trying to move away won’t save you from the mischief of an angry Cluricaun; he can simply hide in one of your casks and come along with you wherever you go. You may be able to rid yourself of one by removing all strong drink from the home. But if you do manage to drive a Cluricaun away in the hopes of his being replaced by a more agreeable one to keep watch over your home and cellar, you are out of luck. Once one is banished, no Cluricaun will ever return to that home. And you might miss the sound of his occasional tipsy singing of Irish folk melodies filtering up from below the floorboards! 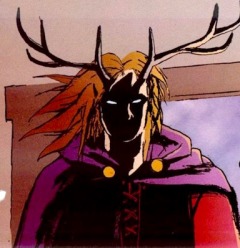 Bane of Cluracan in The Sandman: “The Kindly Ones” (Gaiman/Hempel/D’Israeli), 1994

“The Cluracan” is a character in the Neil Gaiman comic The Sandman (DC/Vertigo), appearing in several story lines. He also appears in the spinoff series The Dreaming. He, like the traditional Cluricaun, is a drinker, a dandy, and  bit of a troublemaker. He’s a courtier of Titania, Queen of Faerie, often serving as her ambassador, although he does tend to get on her nerves. Additionally, there is another character who appears in both series: The Bane of Cluracan, or the Wild Hart, who is the Cluracan’s self-created nemesis.

The story of a Cluricaun named Little Wildbean, who “haunted the house of a Quaker gentleman named Harris,” is told in The Fairy Mythology (Keightley):

This Wildbean, who kept to the cellar, would, if one of the servants through negligence left the beer-barrel running, wedge himself into the cock and stop it, till someone came to turn it. His dinner used to be left for him in the cellar, and the cook having, one Friday, left him nothing but part of a herring and some cold potatoes, she was at midnight dragged out of her bed, and down the cellar-stairs, and so much bruised that she kept her bed for three weeks. In order at last to get rid of him, Mr. Harris resolved to remove, being told that if he went beyond a running stream the Cluricaun could not follow him. The last cart, filled with empty barrels and such like, was just moving off, when from the bung-hole of one of them Wildbean cried out, “Here, Master! Here we go all together!” “What!” said Mr. Harris, “Dost thou go also?” “Yes, to be sure, Master. Here we go, all together!” “In that case, friend,” replied Mr. Harris, “let the carts be unloaded; we are just as well where we are.” It is added that “Mr. Harris died soon after, but it is said the Cluricaun still haunts the Harris family.”

Read “Legends of the Cluricaune: The Haunted Cellar”

References:
Croker, Thomas Crofter. Fairy Legends and Traditions of the South of Ireland. 1834.
Keightley, Thomas. The Fairy Mythology: Illustrative of the Romance and Superstition of Various Countries. 1828.
Yeats, William Butler, Ed. Fairy and Folk Tales of Ireland. 1892.
“Clurichauns, a darker version of leprechauns, might be a cryptid to keep around.” examiner.com.
“When good faeries go bad: the Clurichaun, or the leprechaun’s alcoholic cousin.” esoterX.com.

5 thoughts on “Monster of the Week: The Cluricaun”