The Season 11 premiere of Supernatural, “Out of the Darkness, Into the Fire,” picks up right where we left off in the Season 10 finale “Brother’s Keeper.” During Season 10 Sam Winchester (Jared Padalecki) negotiated a deal with Superwitch Rowena (Ruth Connell) to cast a spell releasing his brother Dean Winchester (Jensen Ackles) from the Mark of Cain, which resulted in the Darkness being unleashed. Before Rowena left, she made her feelings about her son clear by casting an attack-dog spell on Castiel (Misha Collins) so he would kill Mummy’s little darling Crowley (Mark Sheppard). Season 11 begins with the oncoming storm of the Darkness about to descend on Sam and Dean.

Supernatural brought out the big guns for its season premiere, with Jeremy Carver writing the episode and Robert Singer directing. In a preview for Season 11, Jeremy Carver told viewers that “Out of the Darkness, Into the Fire” and the next episode, “Form and Void,” will function as one big story that examines what the Darkness is and what it may want. In “Brother’s Keeper,” Death told Dean that the Darkness existed before there was light, before there was God. It’s described as “a horribly destructive, amoral force” that was only contained through the Mark of Cain after God and his archangels waged a terrible war. In “Out of the Darkness, Into the Fire” Castiel and Crowley don’t quite seem ready to believe the Darkness actually exists, let alone has been released. The Darkness is such an ominous force it’s thought to be a myth meant to frighten.

Season 11 begins with a reminder of what the Winchester brothers have already been through with “The Road So Far,” set to Creedence Clearwater Revival’s song “Run Through the Jungle.” The emphasis on events of the last season shows us how Dean’s decision to take the responsibility of the Mark from Cain has had terrible consequences. The story of the Mark was told over two seasons, and now we continue with the Darkness being released from the Mark. “Out of the Darkness, Into the Fire” expands the story of the Mark of Cain into something bigger than the boys ever imagined.

The Darkness has passed. Sam wakes up in the Impala, wiping the Darkness remnants out of his eye, with Dean nowhere in sight. Dean has been having a private meeting with the Darkness, who is in the form of a woman (Emily Swallow). Though Dean is lying unconscious in a field a mile away from the Impala, Sam serendipitously finds him. Dean tells Sam that the grey lady saved him and thanked him for freeing her. Sam quickly jumps in to point out that he’s actually the one who is responsible for freeing the Darkness. Boys, boys … there’s plenty of blame to go around for unleashing a primordial force of evil on the world. 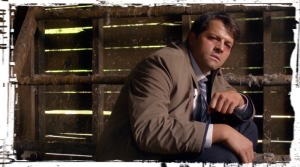 Elsewhere, Castiel is crouching in a barn, hiding. He is still suffering from the attack-dog spell and doesn’t want to hurt anyone. He remembers putting a knife in Crowley, but we see no glowy after effects to make us think Castiel really killed him.

Castiel eventually remembers that Crowley’s red, smoky spirit escaped. So, good news for us—Crowley’s still kickin’. We appreciate that Supernatural didn’t make us wait until the end of the episode to find out that Crowley escaped, mostly because we kinda figured he did. Castiel is trying to hide from humans, but he has found himself on a farm where each family member has at least one gun. Castiel can’t control himself because of the attack-dog spell and runs out of the barn when a boy with a rifle shows up.

Sam and Dean come upon a bloody scene in the middle of the highway. They find an abandoned police car, a dead family, and dead road workers. Things are not looking good. A dude with black veins in his neck approaches them, but Deputy Sheriff Jenna Nickerson (Laci J Mailey) kills the man before he gets to them. So the police car wasn’t abandoned after all. Deputy Jenna does a neck check to ensure they’re not like the black-veined road crew that killed the family.

The boys take Deputy Jenna to a nearby hosptial, only to find a whole lot of dead people. One of the road crew is there. He has the black neck veins and is acting all crazy, trying to break his way into a closet. Sam hears the sound of a baby crying coming from the locked closet.

Since all the doctors and nurses have been murdered by crazed road workers, Dean sews up Deputy Jenna’s wound. Jenna feels guilty for killing the road workers back at the scene, some of whom she knew. When she comments that her job is supposed to be about saving people, Dean responds, “Yeah, well … It sounds better on paper, doesn’t it?” As Dean sews up her wound he remembers talking to the Darkness.

Having escaped Castiel’s spellcast assassination attempt, Crowley finds a middle-aged woman to possess. Going into her house, Crowley finds that the woman’s husband has decided to accede to her request to get extra friendly with the neighbors. You never know what you’re going to find when you possess a body.

Back at the hospital, Sam keeps an eye on the violent road crew dude from a respectful distance until the man collapses. Sam comes over to the closet and knocks. He says it’s OK to come out and slides his FBI badge under the door. The door opens and a huge man comes out with a tiny baby. The man, Mike (Aaron Hill), tells Sam, Dean, and Jenna that his wife died during childbirth. Mike describes how the road crew pulled up to the hospital and started killing people. It turns out that during the attack Mike got infected, and it’s not clear how long it will be until he goes rabid.

Sam and Dean debate what to do about soon-to-be-monster Mike. Dean wants to kill him, while Sam wants to wait for him to die. Both seem like shockingly terrible plans. The boys’ moral compass seems to have gone awry. Mike knows he’s going to go into monster mode; he can feel it. He makes a deal with Deputy Jenna, whom he already knows, to take his little girl. In exchange he leaves to ride things out on his own. Letting him just leave also seems like another terrible plan, maybe even worse than killing him. What if there’s a Burger King down the road that he wanders into in a rage state?

Elsewhere, Castiel prays, confessing his transgressions to the angels, asking them to save him from doing worse. Castiel is holding his own with the attack-dog spell. He calls Dean. He explains that Rowena escaped with the Book of the Dead and the Codex. Sam and Dean ask Castiel about the Darkness, but before he can answer angels show up with angel blades in hand.

Crowley’s demon crew has arrived to find their boss in a house with some dead, naked Midwesterners and are surprised. You’d think demons would be less prudish.

Before Sam, Dean, and Jenna can leave the hospital with the baby, another car full of insane rage people pulls up. Sam and Dean argue about how to handle the group of crazies entering the hospital. Dean is getting ready to kill them all, feeling like it’s the only way to protect the baby. Sam disagrees:

Sam: “Dean, if we don’t change–right now–all of our crap is just gonna keep repeating itself.
Dean: “Hey, I don’t even—what?”
Sam: “This—this ‘kill first, question later.’ What happened to us? Hunting things—we’re good at that. Sure, we’re great at that. But that’s only half of the bumper sticker, man.”
Dean: “Sam, I am trying to save that baby.”

Sam reminds Dean that saving people means saving all the people, “Not just the baby. Not just each other.” He tells Dean that he just unleashed a force that could destroy the world, just to save his brother, and he would do it again. Sam adds, “This isn’t on you. It is on us. We have to change,” which Dean finally seems to hear. Dean tries to be open-minded by considering another option besides just killing everyone.

Sam decides to be the bait in order to let Dean and Deputy Jenna escape with the baby. After leading the insane rage crowd away from the baby, he locks himself in a supply closet while his pursuers bang on the door. His protection doesn’t last long when he is attacked by an infected woman already inside the closet. Before he kills her she manages to infect him when her blood goes right into his mouth. Gross. The only good news is that now that he has the infection, they aren’t interested in pursuing him anymore. “One of us! One of us!” They don’t actually say this, but you get the idea.

As Dean and Jenna are on their way out of the hospital, the baby’s papa, Mike, is standing by the entrance, trying to hold himself back from killing them. He tells them the baby’s name is Amara, then collapses and dies. Again, it’s not clear how waiting for them to die is all that different than killing them. 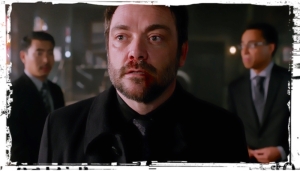 Crowley returns to the meatsuit of Fergus MacLeod. His minions tell him that the Darkness has been released. Crowley is skeptical, but then reassures the demons that even if it’s true, demons and the Darkness are natural allies. There is news about the Cage—the one in Hell that imprisons Lucifer and Michael. It’s believed that someone in the Cage is trying to warn them about the Darkness. Apparently Hell is freaking out.

The angels tell Castiel they moved the doorway to Heaven after Metatron escaped. Castiel quickly realizes they aren’t taking him to Heaven. Poor Cas can never catch a break.

Dean stops at a gas station so Jenna can change the baby. He calls Sam, who is still sitting in the med supply closet, on the floor. Sam lies, pretending everything is all right. Sam tells Dean he’s going to find a cure. Dean is taking Jenna up to her grandmother’s, but says he’ll be back in a couple hours to help Sam clean up the town and hunt down the Darkness. It doesn’t seem likely that Sam will survive that long, but you never know what’s going to happen on Supernatural.

Dean has another memory of his conversation with the Darkness. He asks her why, if she’s so bad, she hasn’t hurt him yet. She responds: “For the same reason that you’ll never hurt me. We’re bound, Dean. We’ll always be bound. You helped me. I helped you. No matter where I am, who I am … we will always help each other.” In the gas station bathroom Jenna is changing Amara’s diaper. We see that Amara has a tiny baby-sized version of the Mark of Cain on her shoulder. It turns out this little baby that Dean was so committed to protecting is something more than a baby. 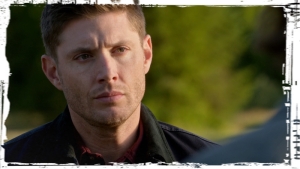 “Out of the Darkness, Into the Fire” doesn’t have the same punch as Supernatural’s Season 10 premiere, “Black,” but it does keep us engaged. As far as Winchester speeches go, Sam’s was pretty good. Will Dean tell Sam about his talk with the Darkness? Will Sam tell Dean he is dying? Will the brothers ever go a season without lying to each other? Talk of the Cage was intriguing since there’s speculation about what past characters might return for Season 11. We’re slowly getting introduced to the Darkness while also learning what happened to Crowley and Castiel. “Out of the Darkness, Into the Fire” shows us that Season 11 of Supernatural has both some old and new ideas, and we can’t wait to see how they play out.

2 thoughts on “Supernatural S11E01 Recap: Out of the Darkness, Into the Fire”