In the Supernatural season finale, “Moriah,” writer Andrew Dabb and director Phil Sgriccia craft a thrilling episode of television that begins the end of the series. Season 14 leaves behind Michael’s attempted coup and Jack’s soulless struggle, revealing a truth we didn’t see coming. Remarkable performances by the cast took a great story and turned it up to 11. “Moriah” is classic Supernatural at its best.

Family and Free Will

Jack (Alexander Calvert) explodes from the Ma’lak box, realizing that Sam (Jared Padalecki) and Dean (Jensen Ackles) betrayed him. After Jack leaves the bunker, the Winchesters struggle with how to proceed. Dean is determined they must kill Jack, while Sam is more ambivalent. Castiel (Misha Collins) remains Jack’s advocate, searching for a way to save the out-of-control nephilim.

The title of the episode, “Moriah,” refers to Mount Moriah in the Bible and the story of Abraham and Issac. God commands Abraham, “Take now your son, your only son, whom you love, Isaac, and go to the land of Moriah, and offer him there as a burnt offering on one of the mountains which I will tell you” (Genesis 22:2). Abraham trusted God and offered his son Isaac as a sacrifice. God intervened and spared Isaac’s life. Dean isn’t willing to play that role. Never one to accept fate, Dean ultimately places his faith in family over God. Chuck said it all back in the Season 5 finale “Swan Song”:

“So, what’s it all add up to? It’s hard to say. But me, I’d say this was a test … for Sam and Dean. And I think they did all right. Up against good, evil, angels, devils, destiny, and God himself, they made their own choice. They chose family. And, well … isn’t that kinda the whole point?”

When they find Jack he acknowledges his dark side, telling Dean, “And you were right, all along. I’m a monster.” It’s heartbreaking watching these moments with Jack, who wants to be good, but no longer knows how. Then “Moriah” suddenly shifts into a completely different story, this time with real monsters.

Echoing “Swan Song,” the climax of “Moriah” takes place in a cemetery. When all hell breaks loose (literally), we get glimpses of monsters of the past returning. In a reference to the pilot episode, a man picks up a Woman in White on a lonely road. The ghosts of the past keep coming with the killer clown John Wayne Gacy, Bloody Mary, and a cemetery full of zombies.

These references to past monsters aren’t the only metafiction moments in “Moriah.” We revisit the concept of God the creator as writer and storyteller. And it turns out we aren’t the only ones who love to watch Sam and Dean, and consider them our favorite show. A fun meta moment occurs when a news report reveals what happens when people can no longer lie:

“In what was supposed to be a speech on farm subsidies, the president instead spent more than two hours disclosing his entire tax history, deep ties to Russia and North Korea, and a, quote, demon deal he made with someone named Crowley.”

As Supernatural heads into its final season, these connections to the past feel intensely meaningful. The series is rich and resonant, built on fourteen years of supernatural lore and storytelling. God may have created the Earth, but Eric Kripke and those who followed created Supernatural.

In the best tradition of Supernatural, “Moriah” contains heartfelt and hilarious dialogue, brought to life by the cast. Alexander Calvert’s performance in the cemetery, as he struggles with what he’s become, is certainly among his best in the series. Despite Jack’s experience and power, he seems younger and more vulnerable than we’ve ever seen him.

The seriousness of the episode created a nice landing spot for some very funny lines. When Sam asks about other realities, Chuck tells him, “Most of them are boring. One is in reverse. In one there is no yellow. One of ‘em is just all squirrels.” The writing is heightened by some terrific acting. Chuck tells Sam, “Of all the Sams and Deans in all the multiverse, you’re my favorite. You’re just so interesting, I mean, like that thing that happened at the office earlier today, that was crazy, right?” Chuck’s look reveals a writer seeking approval, while doubt and discomfort begin to creep into Sam’s every glance and movement. The scenes between Jared Padalecki and Rob Benedict exemplify how writing, directing, and performance come together in “Moriah” to create something more than the sum of its parts. 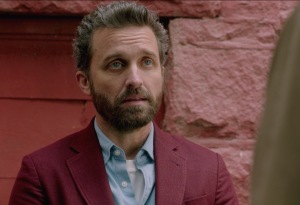 The pace of the plot quickened over the course of the episode, and our heart rate with it. Color and light infuse most of the scenes. Sam and Dean find themselves in a brightly lit white office space. Castiel knocks on hell’s door in a red alley when Check appears in his red jacket. Castiel and Jack talk together in a sunlit green cemetery, while a statue of Mother Mary stands behind them. After Dean’s fateful decision everyone suddenly finds themselves in the dark. As Motörhead sings, “God was Never on Your Side,” the cemetery becomes a scene straight out of a horror film, replete with spooky special and visual effects. “Moriah” provided enough closure to make this cliffhanger exciting, but not exasperating.

If the multiverse storyline was always intended to lead to this reveal, that’s some Kripke-level planning, right there. And how long have they been waiting to use that song? The music throughout the episode was fairly sparse, which served to emphasize “Carry On Wayward Son” in the prologue and Motörhead at the end.

“Moriah” kept us enthralled. We laughed, cried, shouted at the TV, and even gasped out loud. “Moriah” is, dare we say it, the best Supernatural season finale since “Swan Song.” Now please excuse us while we watch it five more times.