Looking for some spooky series to enjoy during the cold nights of fall? Whether it’s Halloween or Harvest, the fall is the perfect time for an evening of fun and fear. This season provides some intriguing television options concerning the supernatural realm.

The Haunting of Hill House (Netflix) 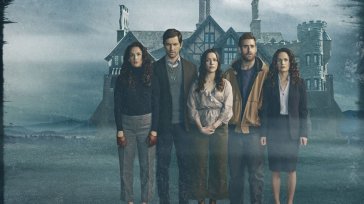 This classic tale of gothic horror, written by Shirley Jackson, gets a modern retelling in a 10-episode series on Netflix. Using a non-linear narrative, the story centers on a young family living at Hill House and their later lives. This tale of horror is also a psychological thriller, with complex family relationships emerging out of their experience in Hill House. Set aside time to binge this series because once you start, it will be hard to stop watching this enthralling series. The Haunting of Hill House is available on Netflix.

Twenty years after the original series first aired, Charmed returns in a revamped series on the CW. The Charmed Ones are sisters who use witchcraft to battle the forces of evil. Mel (Melonie Diaz) is a social justice activist while younger sister Maggie (Sarah Jeffrey) just wants to have fun as she begins college life. Geneticist Macy (Madeleine Mantock) believes there’s a scientific explanation for everything. These empowered women take on monsters—both the human and supernatural kind. Watch Charmed on the CW Sundays 9/8c.

It turns out that everything old is new again, because Netflix has developed a new series based on the Archie Comics classic Sabrina the Teenage Witch. This version of Sabrina is something you haven’t seen before, with witches who worship the Beast, kill each other, and have their own special school. Kiernan Shipka stars as Sabrina, Ross Lynch as loyal boyfriend Harvey, Lucy Davis as Aunt Hilda, Chance Perdomo as Cousin Ambrose, and the talented Michelle Gomez as a crafty teacher. The series takes its time telling its Season 1 story, creating interesting characters and painting a rich backdrop. Chilling Adventures of Sabrina is available on Netflix.

This newest supernatural series from the CW continues the tradition of The Vampire Diaries and The Originals. The series follows Hope Mikaelson (Danielle Rose Russell) and Alaric Saltzman (Matt Davis) at the Salvatore School for the Young and Gifted. Young vampires, witches, and werewolves learn to navigate high school life and their supernatural powers. Watch Legacies on the CW Thursdays 9/8c.

Turn off the lights, get under the blankets, and enjoy these supernatural series.