Through six seasons of Game of Thrones there’s been much treachery, terror, and misfortune. Despite the many hardships, there are still moments of camaraderie and kindness. Closeness among friends provides viewers with moments of humor and joy. Here are some relationships from Game of Thrones that create a bit of light in what can be a very dark world.

In a world filled with deception and danger, the friendship between Sam Tarly and Jon Snow stands out in Game of Thrones. These two true friends share loyalty, mutual respect, and genuine affection. Born of noble houses, Jon honed his skills as a warrior while Sam acquired a passion for learning. Jon volunteered with the Night’s Watch for the honor of House Stark. On the other hand, Sam was forced to join by a cruel and capricious father. At Castle Black, Jon and Sam protected and supported each other, creating a bond that may yet help to save the Seven Kingdoms.

The Onion Knight, Davos Seaworth, comes to love the kind and innocent Shireen Baratheon like a daughter. Shireen protests the imprisonment of Ser Davos, telling her father, Stannis, “He’s my friend.” Later, Shireen teaches Davos to read using books about the history of Westeros as instruction. When Davos finds the wooden stag he gave to Shireen burned he realizes her dreadful fate. The relationship between Davos and Shireen reminds us that there are good and honorable people in the world of Game of Thrones, even if they sometimes come to a terrible end.

The odd couple of Bronn and Jaime Lannister manages to create comedy gold whenever they’re on screen together. Bronn may have met Tyrion Lannister first, but it’s his travels with Jaime that we love. After Tyrion escapes King’s Landing, Jaime solicits Bronn’s assistance in a journey to Dorne and later to Riverrun. Their relationship may be more of an arrangement than a friendship, but they do have a begrudging respect for each other. Bronn doesn’t spare the Kingslayer his wit, asking, “Not blonde enough?” when Jaime notes that some girls aren’t his type. Bronn and Jaime provide some much-needed light moments in the deadly serious Game of Thrones.

Arya Stark and the Hound

Frenemies Sandor Clegane and Arya Stark have a complex relationship, to say the least. The Hound takes Arya as his hostage in hopes of ransoming her, but things don’t go as planned. Though less brave souls cower in the Hound’s presence, Arya doesn’t hesitate to confront, insult, and strike him. For his part, Sandor Clegane begins to take on the role of Arya’s protector. When they start their journey, the Hound is on Arya’s “kill list,” but in the end, when he pleads for his death, she refuses. Is her refusal a way to torture him, or is she reluctant to kill him because she’s developed a soft spot for her captor? Whatever these two meant to each other, their association radically changed them both.

Co-conspirators Lord Varys and Tyrion Lannister have been entertaining viewers on Game of Thrones for six seasons. Though trust took time to build, their friendship was cemented when Varys helped Tyrion escape from Westeros. They now have a common purpose in serving Queen Daenerys whom they believe is “our best, last chance to build a better world.” Conversations between these master strategists are always engaging to watch. Clever quips along with allusive discussions about power and class make Varys and Tyrion a fascinating pair. With their departure from Essos, these crafty allies are bound for some interesting new adventures in Season 7.

Daenerys Targaryen has been known to establish boundaries with some of those who serve her, but she’s developed a close relationship with her advisor and handmaiden Missandei. They’re both strong and talented women. Daenerys may be the Mother of Dragons, but Missandei can speak 19 languages! It’s not known what lies ahead for Missandei and Daenerys and in what ways they’ll be tested, but their story will continue in Westeros. 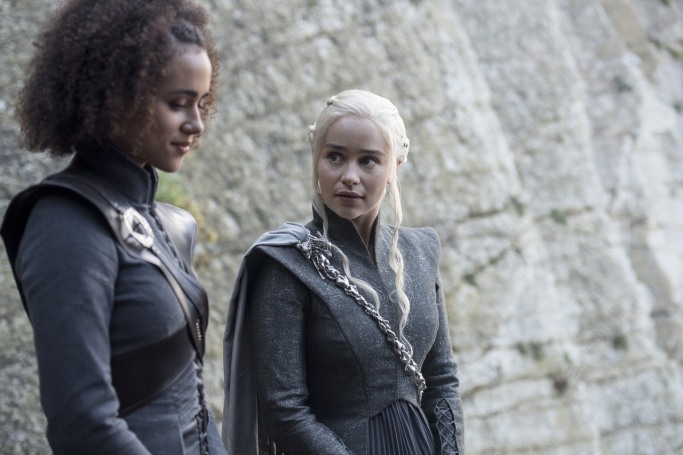 Ser Pounce only made one appearance in Game of Thrones, yet Tommen Baratheon’s cat made a big impression. Tommen’s love for Ser Pounce showed him to be a kind and gentle soul. Tommen must have found some comfort in his BFF Ser Pounce during his stressful reign, though in the end, it wasn’t enough. Who will take care of Ser Pounce now? The Gods only know.

Tell us what friendships you find most fascinating to watch on Game of Thrones.

One thought on “Our Favorite Friendships in Game of Thrones”