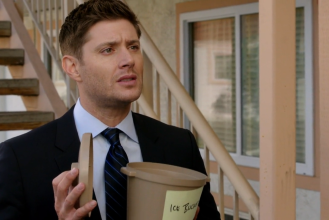 In Supernatural’s 11th episode of Season 12, “Regarding Dean,” we get witches, a bunny, tiny vodkas, and lots and lots of Dean Winchester—both the silly and the sad. “Regarding Dean” was written by new Supernatural writer Meredith Glynn, who also wrote “The One You’ve Been Waiting For” (S12E05, AKA the Hitler one). It was directed by John Badham, who has been with the show since Season 9.

The episode title, taken from the 1991 Harrison Ford film Regarding Henry about a man with amnesia, offers a hint to the story. But Dean’s spell-induced forgetfulness is perhaps worse than typical TV amnesia—it is a fast-moving type of senility, so we watch helplessly along with Sam (and Dean himself) as Dean’s whole life is erased from his mind bit by bit. It’s a Monster-of-the-Week episode, leaving the season’s ongoing “devil baby mama drama” to the side for now, that offers some moving as well as goofy moments from Jensen Ackles.

“Wait. There are Witches?”

While on a case in Arkansas, Dean goes out for hamburgers and fails to return to the motel, having run into a suspect witch. He chases the witch through the woods and manages to wound him, but then is knocked out with a druidic memory loss spell cast by the dying witch with the aid of glowing glyphs hastily carved into a tree trunk.

He awakens in the morning, still in the woods and with a rabbit munching on breakfast beside him. (It’s a cute moment; we are reminded in the “Then” pre-show recap that Dean feels bad for rabbits as far as witches are concerned.) His phone is broken, so he flags down a passing jogger to borrow a phone to call Sam.

When the brothers meet up at nearby Waldo’s Waffles, they both just assume that Dean must have gone on a bender and blacked out. Sure, pretty pathetic, but not particularly suspicious—until Dean can’t remember how to drive and says, “Who’s Dean?” when Sam yells his name.

Once they retrace Dean’s steps and figure out that he’s been hexed, Sam decides to call upon Rowena for help. When she takes the initial call from Sam, she’s cheating at high-stakes poker with some serious-looking gentlemen in what appears to be a dark corner of a server room, with flashing panels of LED lights providing an unexpected ambience.

There’s a hand-wavey agreement from Sam to Dean’s request to not reach out to Mary or Cas instead, but it turns out Rowena is a good choice. She’s familiar with this particular family of witches, though she’d also like to get her hands on their Black Grimoire, the 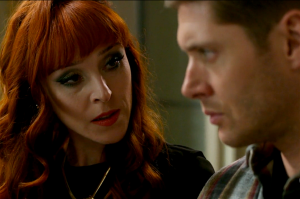 source of their powerful druidic spells. Not to mention that she holds a nearly hundred-year-old grudge against the siblings for booting her from their little coven. Poor Rowena, so bad at making friends. Maybe that’s another reason she decides to show up to help in person. In the final showdown, though, it’s Dean who saves the day, albeit with a little help from some instructional sticky notes left by Rowena in the Impala. Though his memory is almost completely gone, he still understands when Sam quickly explains in two or three words that he’s Dean’s brother, and the guy he’s chasing down the stairs is the witch. Two well-aimed witch-killing bullets, and all that’s left is for Rowena to use the Black Grimoire to break the spell.

“Sucks for that guy!”

The show has some swell comedy moments, such as the slap a local barmaid gives Dean (and his priceless reaction face), and later, the same barmaid’s distress at realizing she

may have taken advantage of poor “roofed-up” Dean the previous night. Plus Dean watching cartoons, Dean playing with a voodoo doll, etc. But a turn is taken when Dean wanders out of the motel room to look for ice to go with the mini-bar’s tiny vodkas. We feel the same sort of fear when a small child vanishes in an unfamiliar place as Sam does when he can’t find Dean. As both brothers begin to realize the seriousness of Dean’s condition, there is a memorable scene of the elder Winchester brother staring into the motel room’s bathroom mirror, trying to remember who he is. The scene goes on for a while, and Ackles really communicates that existential fear.

While it’s not uncommon for Sam to be the grownup in the family, it’s less frequent that the elder/younger brother dynamic becomes reversed as it does in “Regarding Dean.” Sam is in the position of a parent through much of the episode—he even has to have “the talk” to Dean about the truth about monsters, just as Dean explained it to him all those years ago in “A Very Supernatural Christmas.” (Although to be fair, it went much better than “the talk” usually does—”I mean, come on! Best job ever!”) As Dean becomes more childlike, Sam must react as his caretaker. Sam’s argument with Rowena about the logistics of going after the witches while Dean can’t be left alone will have a familiar ring to any parent, just as to caregivers of family members suffering from dementia, Sam’s heartbreak at watching his brother’s memories of him and their life together slip away is well understood.

“I was awesome on that bull.”

The episode comes back around to a happier note by the end, though Sam is left wondering if it would be better to be free of all the memories of a hunter. But Dean sets him straight:

Dean: “Well, look, was it nice to drop our baggage? Yeah, maybe. Hell, probably. But it wasn’t just the crap that got lost. I mean, it was everything. It was us, it was what we do, you know? All of it. So that’s what being happy looks like? I think I’ll pass.”

Though Dean tells Sam that there’s no reason to be jealous of the chance to forget all they’ve done, the episode wraps with a montage of delightful memory-free Dean moments, set to Bobby Goldsboro’s “Broomstick Cowboy.” (We love how the title conjures both witches and honky-tonk mechanical bulls.) What a travesty it would have been had we not gotten to see Dean ride Larry by the end.

All in all, a well-acted, satisfying episode. We stepped back from the season’s main story arc for a bit, spent some quality time with Rowena and her voodoo doll, gained a new magical item (the Black Grimoire), and experienced some classic Dean Winchester moments, including this choice bit of dialogue:

How you feel about waffles? [Grunts] What? Dumb question. Right. What psycho doesn’t love waffles? I mean, they’re fluffy. You got the little pockets full of syrup. You just cover ’em in whipped cream. Am I right?