“A Credible Threat” is just the kind of Teen Wolf episode we love: everyone working together to stop a scary supernatural threat, all while a high school lacrosse game is going on. What we’re trying to say is, less Eichen House and more Beacon Hills High School—that’s how we like our Teen Wolf. Besides the teamwork, there’s a lot to enjoy in “A Credible Threat.”

Deputy Parrish needs to know where he’s going and what he’s doing at night, so he enlists the help of Chris Argent. Who better to follow a Hellhound than a hunter? Mr. Argent has enlisted his own help—Scott, Stiles, and Liam—because in Teen Wolf adults can’t function without the help of supernatural teens.

When the boys show up at the school to tail Hellhound Parrish, Liam makes a bit too much noise. Liam has suddenly become the comic relief of Teen Wolf. Hey wait a sec, Stiles is supposed to be the awkwardly funny one! At Beacon Hills High School they follow a trail of bodies that leads to a bus full of murdered teens. When a still-conscious boy begs for help, Hellhound Parrish steps in, saying, “You can’t help him.” For a moment we wonder if Parrish is responsible, but then we see the Beast tear the teen in two. Gross, Teen Wolf! The Beast takes off, with Hellhound Parrish right behind.

The next day at school, Lydia finds Parrish lying in the stacks. How come no one else had noticed the burnt-up-looking Deputy with flame-retardant shorts lying on the floor of the library? After returning to his former self, Parrish, along with Lydia, seeks out the help of the Argents once more. Their help takes the form of a crazy-looking freezer that will force human Parrish and Hellhound Parrish to meet each other. Deputy Parrish can’t defeat the Beast until his two sides are reconciled—or at the very least on speaking terms.

While Mrs. McCall and Braeden ensure Malia is kept safe at the McCall house in case the Desert Wolf comes to call, Scott is spending the night over at his girlfriend’s. Scott and Kira spice up their foreplay with sports talk. In the morning Scott worriedly watches Kira go foxy when she handles her sword. While Scott wonders if Kira can control her fox spirit, we wonder if any of these Beacon Hills parents can control their teens. Is Beacon Hills in the Netherlands or something? 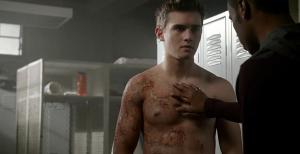 After suffering 3rd-degree burns, Corey wants to get the hell out of Beacon Hills. He shows his scars to Mason, who insists, “people like me need people like you to save us.” But Corey knows Mason is too smart to need him, and Mason quickly proves it when he realizes that the Beast always appears near a source with a high-frequency transmission. They realize that the upcoming charity lacrosse game will have a lot of news coverage, and the transmissions will attract the Beast.

In a partial pack powwow, Liam fills Scott in on Mason’s theory.  Stiles tells the group that the Beast in teenage form has size 10 sneakers, with Parrish’s blood on the bottom. They discuss whether the Beast could attack at the lacrosse match. The group decides that they need to get the game canceled.

Stiles talks to his dad, but Sheriff Stilinski won’t be able to get the game canceled. Stilinski suggests they forfeit, but the substitute coach is by-the-books. Scott and Stiles go to Plan B and check in on Coach. How we missed you Coach! Coach prefers to hide out at the Stepping Stones rehabilitation clinic so as to avoid being shot in the stomach by an arrow once more. He says he will never coach at Beacon Hills again. They tell him they don’t need him to coach, but to forfeit the game. Not sure how that’s any more appealing, but who knows how the Coach’s mind works.

Before the game, the pack (minus Lydia) meets in a science classroom (we assume, since it has a skeleton in it) to go over their plan. Malia asks what they will do if the Beast shows up, pointing out that Scott is still healing from being temporarily murdered. (Liam is right there—awkward!). Kira quickly jumps in to point out that his chest wound has healed, just in case any of their friends were wondering if they were sleeping together (they weren’t). Scott was able to heal once they got Lydia out of Eichen House and the pack was reunited.

A Game to End all Games

Coach gets lacrosse fever and has decided he isn’t going to forfeit the game. And who can blame him? No one wants to lose to a school called Devenford Prep. The good news is that Devenford Prep star athlete and werewolf Brett Talbot is helping Scott out. Brett’s fellow werewolf packmember Lori is checking shoes from under the bleachers for blood, Liam and Mason are going through all the shoes on the Devenford Prep bus, and Kira is cutting transmission wires.

Kira’s fox spirit decides to join the game, decimating the other players and leading Coach to comment, “That girl is damn serious about charity.” At Scott’s urging, Brett gets Kira kicked out of the game by leading her to respond to his taunting aggro kitsune-style. When she storms off Scott indicates that werewolf Lori should follow her into the school.

Deputy Stilinski is smart enough to start looking for another genetic chimera. He gets help from Mrs. McCall. Best detective team ever.

Malia pulls the cables of the surprisingly large amount of media vans covering the game until she’s suddenly interrupted by her mother. Her mother mocks Malia for trying to save people, but Malia knows the Desert Wolf won’t make her move until the full moon. Malia tells her, “To be honest I am totally up for killing you right now, but I’ve got something else to do.” Just when Malia gets worked up enough to throw down, the Desert Wolf notices Stiles. She realizes that there’s something up between Maila and Stiles, and then disappears. This can’t be good news for Stiles.

Hayden comes down from the bleachers to tell Liam that she’s with him, and that she believes in Scott. Wonder how Theo will feel about Hayden being on Team Scott?

Stiles is checking sneakers under the bleachers. He experiences some resistance from Hayden’s friend Sydney, getting kicked in the face.

Kira doesn’t take kindly to being followed by Lori and they begin to fight. So much for interschool supernatural cooperation. Scott hears Kira and comes to intervene. Kira is being controlled by her kitsune spirit. The fox tries to kill Scott until he finally manages to break through to Kira.

Back at the Argent compound, Lydia tries to connect with Parrish. The Hellhound tells her that he is not Parrish, but he is “Cerberus, Garmr, Black Shuck—I have many names.” Hellhound Parrish says that Parrish is dead. Lydia tells the Hellhound that if he doesn’t let Parrish in, that both the Hellhound and Parrish will die. At the Argents’ urging, she asks the Hellhound to remember Parrish’s death. This causes a reaction, and the machine starts to shake. Parrish falls out and Lydia catches him. He tells her, “I know who I am. I know what I have to do. I have to leave.”

Don’t Call it a Comeback

After his moment with Hayden, Liam is all confidence and it begins to show on the field. Beacon Hills HS begins to catch up. Finally Liam’s efforts result in a tied game. Apparently, it’s exciting enough to be televised. One of the reporters on the field tries to go live, and everything begins to short out. The transmission calls the Beast. Liam sees the Beast, and because he learned nothing in his anger management classes, he impulsively jumps up to respond the attack. He must be dead, right? Well, probably not, but you never know.

Scott, Kira, and Lori hear screaming and they see a bunch of kids running past. Thinking quickly, Scott closes the classroom door. They see the Beast pass by the door’s window. After it passes its claw marks on the wall remain. It’s one thing to talk about the Beast; it’s another to see it. Bet the Sheriff wishes he canceled the game now.

With “A Credible Threat,” Teen Wolf gives us just want we signed up for—an exciting supernatural adventure within the confines of teenage life. The Beast is quite a foe, but it looks like Parrish is getting himself together to deal with this massive threat.