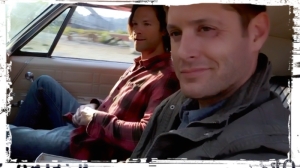 Supernatural creates an instant classic with the Impala-centered episode “Baby.”  The episode is likely to be remembered as one of the series best, bringing together what we love in Supernatural–family, unusual monsters, humor, and a story with a unique perspective.  The Impala has always been the Winchesters true home and getting a glimpse of the Winchesters’ home life was fantastic.  Kudos to director Thomas J. Wright and director of photography Serge Ladouceur. Filming an entire episode in a car is no easy task, even if you have 8 Impalas, one of which is a cutaway car where the roof, front, back, floor and doors can be removed for filming. Though we suspect the crew had the more challenging road in making this episode look so good, acting within the confines of a car can’t be easy for the 6’1 Jensen Ackles and 6’4 Jared Padalecki. This entertaining episode was written by Robbie Thompson. The story emphasizes what Thompson knows we love about the series, set in a Monster of the Week format. It would have been a really good episode if filmed in the traditional bunker, bar, and beyond settings, but placing the narrative within the Impala made it a great story.

What makes a story like this so good, besides a great soundtrack of course? Supernatural is a well thought-out mix of humor, emotion, and horror. The first thing that works is that the Winchesters get along. Sure, there’s some tension, and Dean gets to make his disapproving face, but it shows us why these brothers would continue to hunt together over the course of their lives. They talk, tease, annoy, laugh, sing, and just enjoy their time together, despite being two very different people (though Sam’s “digging into the lore” was a refreshing change). Thompson wrote some very funny dialogue which Ackles and Padalecki play perfectly, plus the distant dry humor of Misha Collins’ Castiel is made even funnier when delivered through a cell phone.

We kinda loved Deputy Donelly (Teach Grant) as a Nachzehrer. How fantastic is a monster that doesn’t even die when you shoot it with silver bullets and then decapitate it? It makes the episode that much more joyful that these monsters, despite their crazy zombie powers, are more hilarious than horrible. Even when Dean fights with the Nachzehrer, it’s pretty fun to watch. We love how they growl and grunt, especially when decapitated. 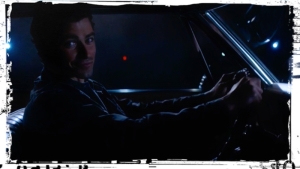 While being a standalone episode, “Baby” effectively integrated into the Season 11 story arc. Having Matt Cohen show up as Young John Winchester felt like a gift to the most dedicated of fans. Not only did Young John leave us wondering if the boys might receive Divine intervention, but we learned that even monsters are terrified of the Darkness. The most important thing we discovered is that only the Winchesters can stop the Darkness. Uh, yeah, they did break it out of prison.

Supernatural highlighted the best aspects of the series though “Baby.” This series can do things no other television show can pull off, because cast and crew have such a depth of knowledge of the characters and the lexicon of the show. They are able to give the fans what they know they want, while repackaging it in different and interesting ways. “Baby” shows us why Supernatural continues to be such a beloved series after being on the air for more than a decade.