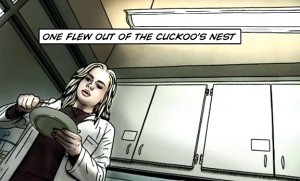 The 11th episode of iZombie, “Astroburger,” was so funny—and so frustrating. Liv talks to Cheezy-Puff demons and imaginary people, and Ravi gets one small step closer to a cure while Blaine makes a giant leap for zombiekind in the form of astronaut salad. Written by Kit Boss and directed by Michael Fields, “Astroburger” sends us hurtling toward the season finale with revelations both real and imagined.

Daran Norris makes another hilarious appearance as local weatherman Johnny Frost—at least a hallucination of him does. (Norris is yet another Veronica Mars alum, having played entertaining buffoon of a lawyer Cliff McCormack.) Liv’s eaten the brain of 24-year-old 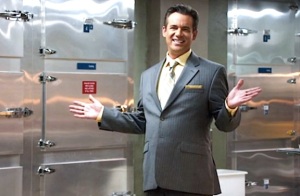 psychotic murder victim (and Major’s mental hospital chess partner) Scott E. (Bryce Hodgson). He told Major that zombies exist—he also spent a lot of time talking to the devil. But unlike the devil, Scott E.’s zombies were not hallucinations. He was at the Lake Washington Massacre, and didn’t just witness the events—he caught some of them on video. Finding that video becomes Liv’s quest for the week. She eats Scott E.’s delusional brain, and both hilarity and despair ensue.

Liv, Peyton, Ravi and Major have a comfy evening at home—Major seems to have taken his friend at the hospital being murdered as his cue to check himself out: “I got a giant Indian to throw a sink through a window and jumped to freedom!” We were so relieved, later in the episode, when Liv finally gave Major the big Z talk that we’ve been waiting for—right up until that relief turned to frustration at the end of the episode, when we realized that Major wasn’t actually there for Liv’s reveal, and has in fact only been a hallucination for almost the whole episode. Dammit! Johnny Frost the weatherman, who acts as Liv’s crimefighting partner throughout the episode, is also only hallucinatory. Some viewers caught on to at least Frost’s being a figment of Liv’s currently damaged imagination, if not Major, but not us! We fell for it hook, line and sinker. The fact that Liv is also having two-way conversations with the cartoon demon on her bag of Hellfire Cheezy Puffs helped misdirect us from the more human-looking delusions. But mainly, we just wanted someone to tell Major the truth so badly we failed to question it when it finally happened. 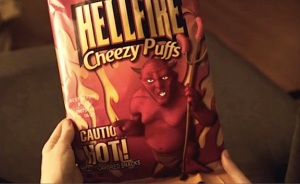 Although there is a murder mystery behind the death of Scott E., Liv instead spends her time trying to find a copy of the Lake Washington Massacre video Scott E. clamed to have shot, and later, sent to a friend in local media. Liv thought it must have been Johnny Frost, but no. We don’t know who he sent it to, but Liv does eventually find Scott E.’s cameraphone and is able to watch the video. Liv turns out to be the starring zombie of the film—we see her voraciously devouring her very first brain on the shore, as she described to Ravi in Episode 9, “Patriot Brains.” Bad news for zombies everywhere, and most especially Liv, if this video gets out.

Speaking of zombies and bad news, Blaine returns this week, having made a deal to provide a rich customer with the brains of American astronaut Alan York. Blaine infected the guy just as he was to begin training for his trip as a passenger on a manned spaceflight (and you can’t pass a physical without a pulse), so he wants to experience a trip to space in the only way he can now—by eating astronaut brains. Blaine carefully prepares several astroburger delicacies in clear clamshell containers, adding a little spaceman sticker to each. Meat Cute really does pay attention to the little presentation details. Regardless of what Major has been telling his friends, however, he is still on the hunt for the truth about zombies, and steals several yellow coolers of Alan York brains out of the Meat Cute delivery van. He brings them to Liv’s in order to prove to her that zombies exist. Yeah, Major, she knows. She’s a zombie video star. 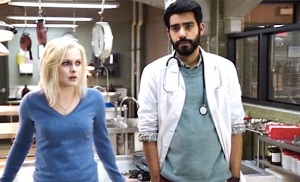 This show can make even seemingly ordinary, or even hopeful, events terrifying, too—Ravi has a breakthrough in his work toward a zombie cure, and somehow it comes across in a way that makes us really frightened for him. Nothing bad better happen to Ravi (Rahul Kohli)—he’s our favorite!

Although it was heartbreaking, this was a great episode, as long as you can take the depiction of mental illness with a grain of salt. The story once again managed to blend a stand-alone murder mystery with the lives of the regular characters, while still focusing on the parts we’re really interested in—the zombie situation. Just one more episode before the season finale, and we’re pretty sure they will wrap up with a bang.