In Episode 9 of iZombie, “Patriot Brains,” Liv takes on sniper skills along with a case of PTSD, Ravi stays un-undead, and we ostensibly learn how to kill a zombie … and how not to. Written by Robert Forman and directed by Guy Bee, this installment takes us to some pretty dark places.

For those viewers wondering where all the existential horror of being brain-eaters has been for the zombies on this show—well, here it finally is. Last week’s show ended with Liv experiencing the terrifying last living moments of poor young Jerome. And as if that weren’t bad enough, she got her sample of Jerome’s cerebellum from her boyfriend Lowell, whereby she learns that he’s getting his meals from Blaine’s murderous meat market. She’s horrified and furious, but it’s Lowell who really takes on the full brunt of what he’s done (and who he’s eaten) when he admits to himself that he just didn’t want to know the truth about where his meals were coming from. Lowell is contrite, lovelorn, filled with self-loathing—and not long for this earth.

Ravi and Liv have a great scene together at the morgue, when Ravi is surreptitiously trying to determine whether he should be craving brains by now, having been bitten by a zombified lab rat at the end of the last episode. We hear the story of Liv’s first brain-eating experience, almost immediately after awakening on the beach after the Lake Washington Massacre. Ravi not only gets the information he needs to determine that he is probably not infected, but he makes Liv have to think about what it must be like for a well-meaning zombie who doesn’t happen to be a doctor with her own limitless supply of fresh brains. Meanwhile, Lowell sees what it’s like to have to feed himself without a trust fund, an iPhone brain delivery service app, and a willingness to not ask questions—he digs up a freshly interred body from a cemetery and brings the brain to Liv as a sort of penance. Both zombies realize the ghoulish reality of what they’ve become. 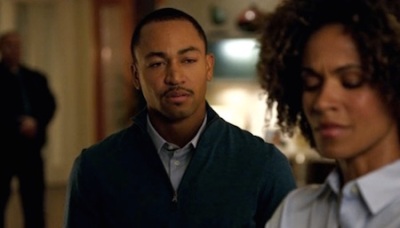 The murder mystery is that of Everett Adams, an Army Ranger sniper killed by another sniper’s bullet on a paintball range. We were chuffed to see that Everett’s ex-wife’s new husband was played by Percy Daggs III—good old Wallace Fennel from Veronica Mars. But the whole cop story is really only to get us to the point where Liv feels the need to murder Blaine, while having access to both sharpshooter skills and a sniper rifle.

Speaking of guns, there’s a great foreshadowing Easter egg for drama theory fans early in this episode—when Major hides his newly-purchased firearm in a drawer at the sound of Ravi’s return to the apartment, a copy of Anton Chekhov’s play Uncle Vanya is on top of the dresser. Major’s situation continues to just get worse and worse—we are pretty annoyed at this point that neither Liv nor Ravi have felt the urge to tell him anything about what’s really happening, zombie-wise, while Major’s life has spun out of control.

In his quest to figure out why the Candyman (Julien) had a cooler full of brains in his car, Major draws the attention of the Meat Cute Mafia, and Blaine sends Julien to Major and Ravi’s apartment with a sledgehammer to take poor handsome Major out. Chekhov’s Gun makes its inevitable reappearance, and Major shoots Julien three times in the chest. But when Major summons Babineaux to the apartment, thinking he’s killed an intruder, the body is gone and there is no blood. Now Babineaux think’s Major’s gone truly round the bend—and perhaps even Major himself is beginning to believe it too.

But at least Major makes it through the episode. Liv makes plans to shoot Blaine while Lowell entertains him on his penthouse apartment patio. But Liv totally wusses out, leaving poor What’s-His-Name to stab Blaine with a barbecue fork. Shockingly, this weapon proves ineffective, and Blaine shoots Lowell in the head while Liv watches from a neighboring rooftop. So harsh! Poor What’s-His-Name. And we were just getting to like you, with your Cobain Jaguar and your cute Big Star top.