In the fourth installment of the new series, Constantine’s sorry old friend Gary Lester appears. Gaz captured a demon in Khartoum, and managed to keep it bottled until his arrival in Atlanta, where it is released by a customs agent at the airport. Mnemoth is a hunger demon, manifesting as a swarm of insects, that inhabits human bodies in order to ravenously feed. While possessed by Mnemoth, the affected person goes on an unstoppable frenzy, indiscriminately and wildly shoving whatever even looks like food into their mouth until they physically destruct. At that point, the body shrivels, and Mnemoth escapes the dying and used-up vessel, swarming again to find its next unfortunate host.

This episode of Constantine was the most scary and interesting one so far. Despite the fact that we knew from the books how events were likely to play out from the first two words of dialogue, spoken by an airport customs official: “Gary Lester,” it still managed to be both suspenseful and horrific.

Although there are some differences between “A Feast of Friends” and the comics upon which it is based (Hellblazer #1, “Hunger”; and #2, “A Feast of Friends,” both by Delano/Ridgway), this story was far closer to being a complete comic book storyline than anything we’ve seen so far (and we include the movie in that assessment as well).  While the show is never quite as dark and gruesome as the book, for network TV it’s pretty grim.

Chas is nowhere to be found (he’s off fixing the cab, we’re told), but Zed is still lolling about being her weird self. Gary, after having witnessed the escape of his bottled demon at the airport, has broken into Jasper’s millhouse to hide and wait for John, but the house has self-protection devices in place for just such contingencies. Zed and John enter to find Gaz thrashing around mid-air in a “zero gravity trap.” Jasper’s Cottage of the Occult has all kinds of little tricks up its dark corridors.

Stylish and steampunky Ring of Solomon

Constantine leaves Gaz and Zed at Jasper’s while he goes off to try to catch the demon in a little glass bottle he has carved with the Seal of Solomon. The demon was last seen in the body of a woman in a grocery store. In the midst of her violent feeding rampage (which events in the comic are referred to as “crammer incidents”), she bites the ear of a security guard clean off. (This is not the last forcible removal of a body part we will be seeing, by the way, so caveat circumspector.) A child who witnessed the event tells Constantine that when the lady died, bugs rose out of her and flew into the mouth of a meat delivery guy with a picture of pig and a cow dancing on his shirt. “Dancing, were they? That’s something I’d like to see.”

John finds Hoffrechter Meats, of the dancing animal logo. He considerately changes the “Days since an incident” sign from 126 to 0.

“This gets more fun by the second. Anyone in here still alive? Preferably not possessed and feeling peckish?”

No such luck. A butcher is hunkered over a carcass, greedily feeding. Constantine manages to summon the demon out of the person and into the bottle, but the demon is too powerful for him to handle and the bottle drops and breaks. He makes a speedy exit, locking the swarming demon in the meat locker, and heads back to Jasper’s to do more research.

In the meantime, Zed has been trying to get more information about Newcastle and Astra out of Gaz (who was, like Richie of Episode 1, also there that fateful night). At one point she puts her hand on Gary’s, and his vibe is so poisonous it practically knocks her out cold, as she experiences being a craven occultist junkie through his touch. When Constantine comes back he notices that she looks weird, although she only looks normal-weird to us. The touch left her with not only an insider’s perspective on heroin withdrawal, but the ability to make drawings of the carved-up face of the kid that Gary was so proud to have yanked the demon out of back in Sudan. The sketches are enough of a clue to send John out again, this time to a restaurant, to visit Nommo, an east African mystic, to try to learn the demon’s name, and how to catch and kill it. Nommo says the demon is called Mnemoth and that the rest of the information he seeks will require some “traveling.” 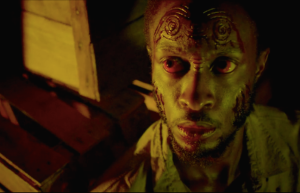 The sacrificial vessel in the streets of Khartoum

Nommo & Constantine make themselves comfortable on the floor of the otherwise empty Nommo’s African Cuisine. They eat a bitter root that looks suspiciously like a vanilla bean, and the trip begins. Body part removal #2: Nommo pokes out one of John’s eyes in their shared hallucination and swaps it for one of his own. Blick. Then he tells the horrible story of Mnemoth the hunger demon, who ravaged the Nile Valley, gaining strength from mass human starvation, until a shaman trapped it. To do so, the shaman wrenchingly chose a young sacrifice. He then (body part removal #3) cut out the boy’s tongue so that he could not curse the shaman for what we was about to do, carved runic symbols of containment into his face with an ancient sacred Kusa knife, and summoned the demon into the adolescent’s body, where it was meant to remain trapped until Mnemoth starved and the boy died.

But the shaman walked away and left the bound sacrifice unattended, and the boy vessel escaped to the streets of Khartoum, where he was found by good old Gary Lester. Gary knew the look of a possessed person when he saw one, and thought maybe people would think he was cool if he took a demon out of a kid, or something:

Once again, John heads back to Jasper’s, only to find Gaz gone and Zed looking even more out of it than usual. Gary decided he was feeling “trapped,” and needed to go out and find the demon himself (and maybe make a quick stop to get straight along the way). He was able to get past Zed easily by grabbing hold of both her arms long enough for his icky psychic energy to actually immobilize her. When John gets back and finds her looking strung out, she tries to defend poor old Gary, but John will have none of it:

Zed: “He just wants to help. He’s so wracked with guilt. He’s going after the demon himself.”
John: “He told you that, did he?”
Zed: “Yes he did. And he meant it. I felt it.”
John: “That’s not what’s happening; trust me.”
Zed: “Are you only willing to see the worst in people?”
John: “I see the truth. Gary’s hopelessly addicted to heroin. And let me give you a little tip about addicts. Between thought and action comes temptation. Always.”

Gaz looking not twitchy at all at US Customs

Although by this point Constantine has already taken a few big afternoon belts of hooch and is just home from a psychedelic vision quest, he draws a bright line between using and abusing. Zed, on the other hand, has never used nor abused—due to her uncontrolled visions, she can barely handle reality straight, as she tells Constantine at the beginning of the episode. Her reactions to Gary’s high-seeking behaviors, along with an earlier comment to John about Gaz: “he’s lucky to have you as a friend” (the idea made us laugh out loud), show us that Zed can be more than a little naïve.

John finds Gaz having the crap kicked out of him by the local drug dealer kids. He talks Gaz out of his situation by giving the kids some African psychedelic vanilla bean. “Best high you’ll ever have—on my life.” Of course, the effects of the drug last forever unless you follow it up with some counteracting nectar, as John and Nommo did, but we don’t think the dealer kids got any of that. Sadly we don’t see a scene of them later to learn how they’re doing with their never-ending trip down the rabbit-hole.

Gary and John stop for a drink, and Gary bares his soul about how he was high and a coward at Newcastle. John is suspiciously nice to him, and they set off as a team to acquire a Kusa knife and find Gaz some redemption.

As the pair prepare to break into a natural history museum, Manny shows up again to ask Constantine if he is sure he really wants to go through with “this.” John ignores the intent of the question, and after a bit of smart-assery, simply says, “I can do this.”

Unlike some other viewers, we don’t have a problem with Manny the Exposition Fairy. He sometimes has a little Jiminy Cricket or Winchester brother in him, as he provides John with opportunities for moments of reflection concerning his actions and motives in a way that neither Zed nor Chas ever can—no human, let alone friend, can serve that role. Maybe he’s even a little like Swamp Thing (but let’s keep fingers crossed Swampy himself shows up one day). As to being an angel, Manny fits adequately into the personality type we expect from DC/Vertigo seraphim (and the similar angelic traits we see in Supernatural)—ineffable, capricious, powerful, supercilious, and irritating.

By now Mnemoth has busted out of the meat locker. They find the demon munching popcorn off the floor of the Fox Theatre. Gary and John take the stage, and the realization finally dawns on Gary that he will be the vessel with which Constantine will trap and kill Mnemoth, and that this has been the plan all along. At first he feels betrayed and angry, but in the end is a willing sacrifice, to do one good thing in his life and to “go out a mage, like John Constantine.” Oh, boy. They have a Boy Melodrama moment. The demon is summoned, it enters Gaz, and the symbols of binding are carved into his flesh in the middle of the Fox Theatre’s grand proscenium stage.

When they get back to Zed at Jasper’s, she’s duly horrified at the sight of the limp and bleeding-from-the-face Gary Lester, and gets all up in John’s grill with, “You betrayed him, he was your friend,” blah blah blah. Constantine lays it out for her once again:

“He came to me! You think I wanted this? Any of it? I told you this would happen. People around me die. If you can’t handle it, then go.”

Gaz thrashes and wails, strapped to a bed in “the room downstairs, end of the hallway”—I guess they’ve done some looking around in that seemingly endless corridor since last week. John sits silently, gripping Gary’s hand. The angel Manny appears, and the two of them sit together as they wait for Gary and the demon inside of him to die.

Was that grim enough for you? We loved getting to see the first storyline of the Hellblazer comics played out onscreen. So much is established about Constantine in those first few issues, including the more deceitful and manipulative side of his nature, and the typically ugly fates of the people close to him. TV Constantine may not be quite as perfidious as Hellblazer Constantine, but he’s growing on us just the same.

6 thoughts on “Constantine S01E04 Recap: A Feast of Friends”