Then the Lord said to Cain, “Why are you angry? […] if you do not do what is right, sin is crouching at your door; it desires to have you, but you must rule over it.” —Genesis IV:7, 8 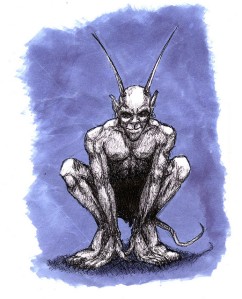 The Croucher is an invisible Mesopotanian entrance demon. The customs still observed today of removing one’s shoes before entering a domicile, and carrying a bride over the threshold, may originate with primeval fear of the Croucher. Although unseen, its presence can be felt near doorways when one has the sensation of one’s hair standing on end.

The Croucher is one among many demonic spirits categorized as the rabisu—”those who lie in wait.” While some rabisu, like the Croucher, have been animalistic and vampiric in nature since before the Babylonian Empire, it is believed by some that the rabisu were once malakim of Heaven and fell at the time of the Morningstar’s rebellion, making them amongst the most ancient of earthly demons.

Shutting the door may help keep the Croucher out, but it may also trap it inside, which is why in Jewish lore it is suggested that there be a small hole in the door from which it can escape. As with most demons, the Croucher is averse to salt and will not cross it. The best way to avoid the Croucher, however, is to have a home filled with the sounds of laughter and happy friends and family.

2 thoughts on “Monster of the Week: The Croucher”