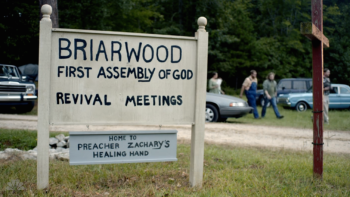 In my name shall they cast out devils; they shall speak with new tongues. They shall take up serpents; and if they drink any deadly thing, it shall not hurt them; they shall lay hands on the sick, and they shall recover. —Mark XVI, 17–18

The seventh episode of Constantine takes us to rural Appalachia, where one may find not only corn-on-a-stick, but in some corners, charismatic Christian ministers who still display their faith through the practice of laying on of hands, speaking in tongues, and snake handling.

A Pentecostal minister in Kentucky refuses to heed his sister’s warnings, and chooses to use a venomous rattler in the snake-handling portion of his sermon. Their church’s congregation has been dwindling since the former minister, their father, died, and he wants to put on a good show. OF COURSE the snake bites him in the middle of his spectacle, and he dies nearly instantly. As his sister tries to resuscitate him, a fiery feather appears in the dead minister’s hand, and he awakens. Stuffing the feather in his pocket, he leaps to his feet as the congregation gasps and cheers. A man missing part of a leg rushes down the aisle on crutches, and the minister lays hands on him. The man’s missing leg grows back, just like that. It is a miracle! END_OF_DOCUMENT_TOKEN_TO_BE_REPLACED