The much-anticipated new series Star Trek: Discovery premiered on CBS with all the excitement fans could hope for. The presence of Ambassador Sarek (James Frain) gives the trekker audience a familiar character to help introduce protagonist Lieutenant  Commander Michael Burnham (Sonequa Martin-Green). In “The Vulcan Hello” and “Battle at the Binary Stars,” Lt. Cmdr. Michael Burnham serves aboard the USS Shenzhou along with Captain Phillipa Georgiou (Michelle Yeoh) and Lieutenant Saru (Doug Jones). After an introduction to the characters, we’re thrust into a dangerous conflict with a Klingon crew led by T’Kuvma (Chris Obi).

Everything old is new again 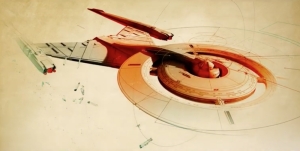 The Star Trek franchise has officially recovered from the mistake made with Enterprise by giving Discovery a classic orchestrated theme song, with a title sequence worthy of HBO or James Bond. Picking up in 2256, Discovery takes place after Enterprise (2151–2161), but a mere decade before the start of the original series (2266–2269). This allows for the possibility that Ambassador Sarek may not be the only familiar character in the new series.

As one would expect, Discovery looks a lot more like Enterprise than the original series, but it has the feel of J.J. Abrams’ Star Trek. For a series available primarily through CBS’s All-Access streaming service, Discovery is a cinematic surprise. This beautifully filmed series is intended to attract more subscribers. These first two episodes are likely to get the attention of new viewers as well as established Star Trek fans because of good casting, a dramatic plot, and some very expensive-looking visual effects. 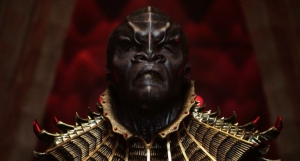 Movie-quality visuals are a fantastic way to reintroduce the Star Trek brand, but it’s always been engaging characters, moral quandaries, and cultural conflicts that have kept fans committed to the franchise. Discovery gives hardcore trekkers a chance to practice their language skills, using subtitles instead of showing Klingons speaking English to each other. If the detailed look of the Klingon characters and their ship is any indication, Discovery will give viewers a chance to delve deep into Klingon history and tradition. 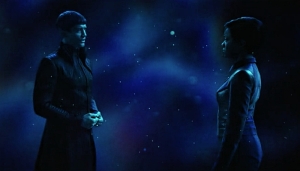 It was nearly a century earlier, in the Enterprise episode “The Broken Bow,” that humans initially encountered Klingons. Since that time there’s been little interaction between the Federation and the Klingon Empire except for some border skirmishes. It was in one of these attacks that young Michael Burnham was orphaned, after which she became the ward of Ambassador Sarek. Being raised on Vulcan means that Michael serves as a character trapped between worlds. We see a few moments reflecting her Vulcan upbringing: using logic to convince the computer to free her from the brig and the chilly meeting when she first meets Captain Georgiou. Beyond these moments, Michael’s highly emotional behavior throughout the first two episodes of Discovery doesn’t reflect a Vulcan ethos. 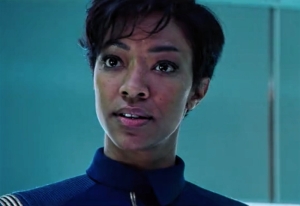 When Admiral Anderson is surprised that someone with Michael’s background would so quickly make assumptions about the nature of Klingons, she tells him, “With respect, it would be unwise to confuse race and culture.” Based on her hunch that they’ve been drawn into a situation meant to start a war, Michael believes they must shoot down the Klingon ship. In her single-minded determination to do what she believes is right, Michael overpowers her Captain and attempts a mutiny. Michael’s actions make her a complex hero. She’s brave, clever, and caring, but she’s also impulsive, arrogant, and insubordinate.

After defeating the Federation, T’Kuvma leaves survivors “to serve as witnesses of Klingon supremacy.” Captain Georgiou considers a suicide mission to destroy the ship, but Michael convinces Georgiou that they need to take T’Kuvma alive so he doesn’t become a martyr. Things don’t go as planned, leaving Michael mired in a swath of destruction.

Living up to the hype

Discovery presents a post-Gene Roddenberry version of Star Trek. While earlier Star Trek series had their fair share of one-on-one combat and battle bridges, those conflicts usually weren’t at center stage. Roddenberry provided a future vision of peace, exploration, and tolerance. It was through this vision that Gene Roddenberry helped changed the way people saw the world. Discovery is steeped in a more traditional science fiction world, though it does take place on a ship helmed by two women of color, at least in the first two episodes. 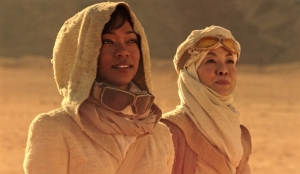 In an epic battle similar to Abram’s Star Trek, Discovery finds itself drawn into a fight. The Cold War has suddenly become very heated. “The Vulcan Hello” and “Battle at the Binary Stars” left us on the edge of our seats with dramatic action and impressive effects. At the same time, it provided an effective introduction to characters we’ve quickly come to feel invested in.

Whether you’re a franchise fan or not, Star Trek: Discovery is TV worth watching. If you’re left at the end of the episode wanting more, CBS has followed the trend of shows like The Walking Dead, Teen Wolf, Kings of Con, and Mr. Robot by creating its own aftershow, called After Trek. Star Trek: Discovery continues on Sundays at 8:30/7:30c on CBS All Access.

One thought on “Star Trek Discovery Review: The Vulcan Hello & Battle at the Binary Stars”