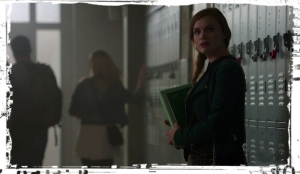 In “Superposition” Scott, Malia, and Lydia start to realize something isn’t quite right, that there are gaps in their memories. Teen Wolf gave us a powerful season premiere in “Memory Lost” and now we must see if these memories can be recovered. Teen Wolf is not known for having a slow narrative style, so the plot moves along quickly with Mason, Liam, Corey, and Dr. Deaton all lending a hand. “Superposition” begins the process of figuring out what pieces are missing, with the emotion and humor Teen Wolf is known for.

Enemies at the School Gate 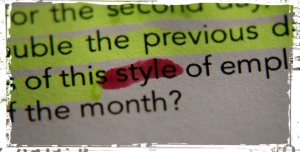 In the last few seasons, Teen Wolf has introduced a supernatural enemy and then unraveled the story around that foe. It’s a strategy that works well, in part because the supernatural creatures Scott McCall and his pack fight come out of a rich mythology. Whether it’s a mythology the writers create or existing tales they draw upon, the antagonists arrive fully formed, with the viewer learning more about who they are and what they want as the season progresses. There are bound to be surprises as we learn more about these adversaries, but that just brings additional interest. Teen Wolf is no whodunit, instead, it invites us to traverse a rich mythology alongside the heroes we root for. 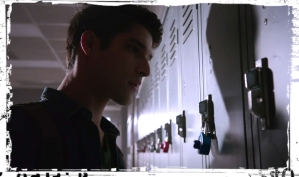 In Teen Wolf either a whole season or half a season is spent focusing on one adversary. Sometimes those enemies have allies, but they all center around one main storyline. This means that the antagonists in Teen Wolf tend to be quite developed. It also means that the story moves fast and has a lot of moving parts. Unlike a show such as Supernatural, Teen Wolf has no “Monster of the Week” episodes in which the heroes investigate a case that has little or nothing to do with the season arc. Teen Wolf tried to create additional storylines last season with Kira and the Skinwalkers and with Malia and the Desert Wolf, but it didn’t work as well as it does in other series, in part, because it’s not the normal narrative structure on Teen Wolf. 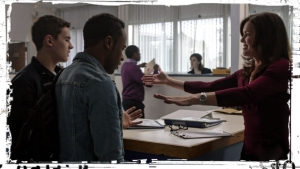 Teen Wolf may not have a Monster of the Week, but it does have Beacon Hills High School. The series is most engaging when the school is integrated into the narrative. In “Memory Lost” there was the handsome new teacher, who found Scott trying to break into Stiles locker this episode, and Mrs. Martin catching Stiles and Scott trying to skip school. In “Superposition” Mason helps Corey in the tutoring class and Mrs. Martin naively declares BHHS a “safe zone” from the supernatural. The tryouts for captain of the Lacrosse team parallel the supernatural power vacuum that will occur when Scott goes to college. Scott tells Liam:

We also love how Jeff Davis uses lessons learned in science and history classes to advance the narrative, something rarely seen in other high school shows. Sometimes it’s subtle, but in “Superposition” the writers spell it out for us when Mason tells Corey:

“It’s just like in physics. It wasn’t there until you saw it. Then it became real. It’s Schrodinger’s cat. The quantum state of a superposition. To see something is to change its very existence. It changed reality.” 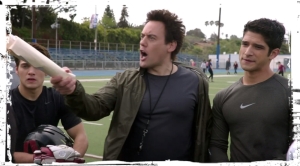 Teen Wolf is a big cast, but most of the main characters have appeared in the first two episodes of Season 6, except for Melissa McCall and Chris Argent. Deputy Parrish is happy to be doing non-supernatural police work. Seth Gilliam has taken a break from The Walking Dead to make an appearance as Scott’s mentor Dr. Deaton. Having Coach Finstock back is fantastic because Orny Adams is hilarious. He speaks for the audience when he tells Mason and Corey, “Extra credit? At 9 o’clock at night? Come on, guys. Get the hell out of here. Go have lives. Your teenage years are not the time for academic achievement.” These kids do spend a ridiculous amount of their evening time at BHHS. 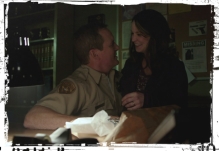 It’s not just old characters making an appearance. In a surprising turn of events, Mrs. Stilinski is alive now that Stiles has been erased. We love these little surprises that Teen Wolf likes to throw in, except when they go too far afield and become unresolved plot lines. It’s still early in the season, but so far Teen Wolf hasn’t fallen prey to overcomplicating the story. 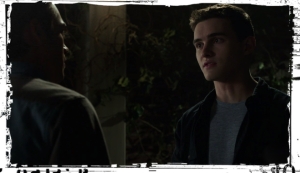 In every supernatural family, there’s bound to be some tension. In “Superposition” it becomes clear that the divide caused by Theo’s pack still remains, which is kind of refreshing. Though we agree with Corey’s point that Liam was pretty quick to forgive his girlfriend Hayden, it’s fun to have some of the mess from last season bleed into Season 6. If Liam wants to be a leader, he’ll have to learn forgiveness. After all, Scott was able to forgive Liam for pretty much killing him. We’re also wondering if Mason has any Beastly side effects left over from the work of the Dread Doctors. 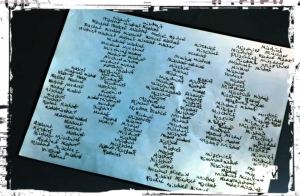 “Superposition” was a fun episode with emotional touchstones as Scott, Malia, and Lydia realize someone important in their life is missing. Someone by the name of Stiles. Having Stiles’ mom return was a bold move, and it will be interesting to see how Sheriff Stilinski, the world’s greatest dad, is further impacted by Stiles’ absence. The first two episodes of season 6, Teen Wolf has reminded us why we love this series.