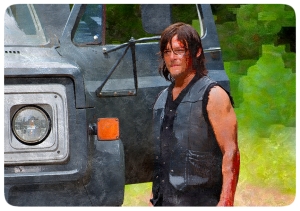 After a long hiatus, The Walking Dead gives us a bloody valentine with the midseason premiere “No Way Out.” Back in November, “Start to Finish” left viewers with a scene right out of the comics, with Rick and friends covered in zombie guts in an effort to escape. “No Way Out” takes it name from the same comics (Volume 14). Millions of viewers spent their Valentines Day glued to the TV, waiting to see who would survive. The Walking Dead–always so romantic.

Who Will Save the Saviors?

As they head back to the Alexandria community, Daryl, Sasha, and Abraham are stopped by a group of armed men on motorcycles. After disarming the three, the leader of this motorcycle gang tells them that all of their possessions now belong to Negan. Abraham asks, “Who’s Negan?” reminiscent of his “Who’s Deanna?” comment in “Remember.” One of the men takes Daryl to the back of the truck, while the gang leader taunts Sasha and Abraham. At first we’re afraid that we’re going to have to deal with another tedious capture/rescue storyline, but then it seems that he could actually kill  one or two of these characters (not Daryl of course). Just when Sasha and Abraham seem to be in the greatest of peril, the men on motorcyles are decimated by an RPG shot by Daryl. It turns out that those rocket launchers that Abraham collected in “Always Accountable” are going to come in pretty handy after all. Though it’s a glorious moment, we can’t help but wonder if they’ll come to regret this moment later in the series. 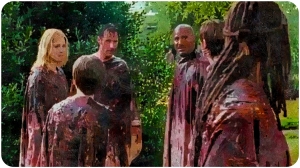 Rick, Carl, Michonne, Father Gabriel, Jessie, Ron, and a very scared Sam, all covered in zombie guts, attempt to make their way through the walker herd. Midway through the slog, Rick changes the plan. There are so many undead lumbering around Alexandria that they need to get the  vehicles from the quarry to round them up. Father Gabriel offers to take Judith to his church. Jessie tries to get Sam to go with Gabriel as well, but he begs to stay with his mother. If only Jessie had taken Judith and her children to the church and Father Gabriel had stayed behind to help with the plan. Instead, the Grimes and Andersons continue on their mission, as Gabriel takes Judith away from the group. 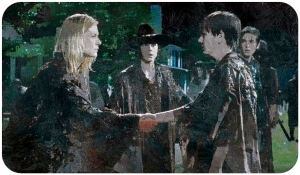 After slogging through the walker herd for some time, Sam sees a walker about his age, and he finally loses it. He remembers Carol’s words: “The monsters will come, and you won’t be able to run away when they come for you. The ones out there. And they will tear you apart and eat you up all while you’re still alive.” Sam’s whimpers quietly, but it’s enough to attract walkers. 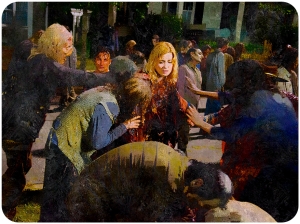 Once Sam is attacked his mother Jessie starts to scream, also drawing walkers. As walkers attack her, Jessie doesn’t let go of Carl’s hand, forcing Rick to remove it with his axe. After seeing the man who killed his father then cut off his mother’s arm, Ron picks up Rick’s fallen gun to shoot the man who seemingly destroyed the Anderson family. Before he can shoot Rick, Michonne runs Ron through with her katana. A stray bullet shot from the gun Ron was holding manages to catch Carl in the eye. That’s gotta hurt. Rick picks up Carl and starts running, while Michonne cuts a path for them through the walkers.

The Doctor and the Wolf 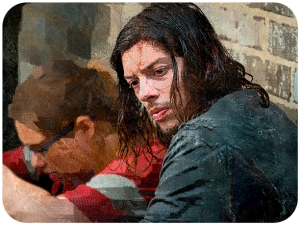 The formerly captive Wolf has become the captor, taking Dr. Denise as his prisoner. The Wolf tells Denise that they must get to the ladder that goes over the wall because it’s safer out there than it is in Alexandria. They run towards the ladder, but a walker blocks Denise. The Wolf, already at the ladder, turns back to help Denise.  He gets bitten and Denise tells the Wolf, “Let’s go. Come with me, now. You get me to the infirmary, I save your life. I’ll save your life.” They get to a house across the street from the infirmary and Denise puts a tourniquet on his arm, then they continue on their way. When they come out of the building, Carol is watching from the roof of a nearby building. Carol shoots the Wolf and as he falls, he yells at Denise to run. Denise manages to make it to the infirmary.

The Word of Glenn 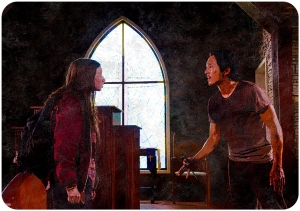 After seeing the precarious situation Maggie is in, Glenn and Enid take a church run for supplies. Enid asks about the comment Glenn made to her on the road, and he explains that he believes that running away means giving up on yourself and the people who helped make you who you are. Enid asks Glenn who those people are to him and he responds, “My parents. A man named Dale. Maggie’s father, Hershel. A woman named Andrea. A man named Tyreese.” When he ask her the same question, she tells him it’s her parents. Enid is inspired enough to insist on helping Glenn to save Maggie.

Glenn draws the walkers surrounding Maggie away, as Enid climbs up to help her. When Maggie sees Glenn, she gasps and calls out to him. As the walkers descend upon Glenn we can’t help but wonder if the writers saved Glenn only to kill him here in front of Maggie. Abraham suddenly shows up and showers the walkers with bullets, and Glenn manages to escape death once more.

It Takes a Village 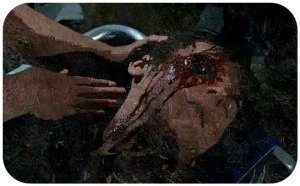 When Denise makes her way to the infirmary she finds Aaron, Heath, and Spencer already there. Later that night, Michonne, Rick, and an unconscious Carl make it to the infirmary. As Denise treats Carl, Rick decides that he needs to exact vengeance, or at least do something. He begins single-handedly slicing and dicing the walkers. When Michonne and the others are freed from surgery duty, they join in on the attack. Other Alexandrians who had been watching the evening’s proceedings from behind barricaded doors, come out to join in the fight as well, transforming them from victims into survivors. Morgan, Carol, Tara, Rosita, and even Eugene venture out to fight the walker horde as well. As they battle, Morgan is forced to confront the walker formerly known as the Wolf. Morgan looks regretful as he kills the walker Wolf. 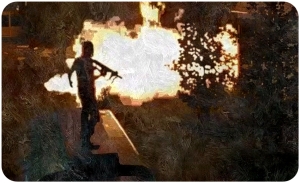 Reunited with Glenn, Daryl suggests that rather than lead the walkers away, they bring them together for a big fire. Seems like Daryl learned a thing or two from the people he met in the woods in “Always Accountable.” He fill the lake with oil, then shoots an RPG to light it. The giant fire gets the attention of the undead. The walkers head toward the fire, and the townsfolk, who are in full zombie fighting mode, continue to kill the rest of the walkers. 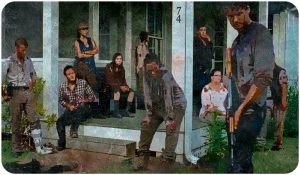 The next day, we see Alexandria filled with corpses.  The townspeople are sitting together in camaraderie after surviving such a terrible invasion. Rick sits with his unconscious son, telling Carl how everyone came together to fight. Rick is hopeful that they can make a new life in which they can all survive and wants to fulfill Deanna’s dream to expand Alexandria. Rick tells his son that he wants him to be a part of this new world, and Carl squeezes his father’s hand.

By the end of “No Way Out” it feels like the people of Alexandria have earned a well-derserved victory. The Walking Dead allows for both the characters and the audience to feel a moment of hope and focus on the future. How long this progressive era will last is unknown, but right now it feels pretty good, so let’s enjoy it.

See review of “No Way Out” here. 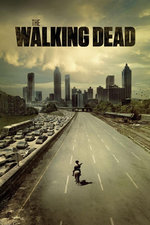