Nothing adds drama like including a Caledonian in the cast. While some of our favorite actresses on television hail from the Highlands, others were raised in the Scottish Lowlands. We can’t get enough of these talented lasses.

We know her and love her as the witch Rowena on Supernatural. Where else would a centuries-old witch originate but from Scotland? It’s the setting for Macbeth, after all. Rowena is more than a powerful witch; she’s also the King of Hell’s mother. By casting Ruth Connell, Supernatural added a strong female character with great wit, charm, and malevolence. Connell has endeared herself to viewers not only by virtue of her strong performances, but also through her engagement with fans. She attends Supernatural Conventions, is accessible to the media, and is responsive to fans on social media. Connell brings humor and grace to her character, and when she’s on screen we can’t take our eyes off her.

This Scottish actress has had a long career in film and television, but of late she has been making an impression in her role as Missy in Doctor Who. Missy is the latest incarnation of the Master, the Doctor’s nemesis and fellow Time Lord. Playing the Master is no easy task, following great performances by John Simm, Anthony Ainley, and Roger Delgado. Missy is the first female version of the Master, and Michelle Gomez plays the role with gusto. Missy is manipulative, clever, psychotic, and very funny. Gomez appears alongside fellow Glaswegian Peter Capaldi, who plays the Twelfth Doctor. Capaldi and Gomez have great chemistry, and portray an age-old relationship filled with rage, deceit, and friendship like only two Scots can. 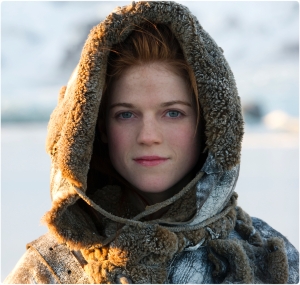 This red-haired beauty won a BAFTA early in her career for her work in the TV movie New Town and played servant Gwen Dawson on Downton Abbey, but Rose Leslie is best known for her role as Ygritte in Game of Thrones. Ygritte knew a little something about Jon Snow, archery, and living free. We loved Leslie in Game of Thrones, but loved her even more in the parody video Game of Thrones: The Musical. Leslie has some mad Scot cred because she’s part of a long-established Scottish family. Her father is the Aberdeenshire Chieftain of Clan Leslie. Leslie was raised in the 15th-century castle Lickleyhead, her family’s ancestral home.

Over the last ten years, this daughter of Aberdeen has had an extensive television career. Yet we love her work most when she plays a role using her native Scottish brogue. Currently Amy Manson plays the Brave character Merida on Once Upon a Time. This is no animated voiceover, but a physical role showcasing the character’s strength, independence, and skill. In the Season 5 premiere, Rumpelstiltskin, played by fellow Scot Robert Carlyle, says about Merida, “What’s she saying? Accent’s a bit much, no?” For us, it’s never enough.

Despite not having a current television series, Karen Gillan remains one of our favorite Scottish actresses because of her stint as companion Amy Pond on Doctor Who. Gillan made for a terrific companion to the Eleventh Doctor, giving her an opportunity to showcase her comedic talent. Her fantastic Inverness accent reminds us of the great variety of distinctive regional dialects in Scotland.

Tell us about your favorite Scottish actress is in the comments below.

4 thoughts on “Our Favorite Scottish Actresses on TV Today”