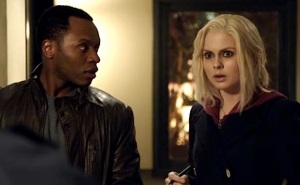 As the first season of iZombie heads toward its conclusion, the show continues on its path of being less a simple procedural drama and more a zombie apocalypse saga, as we learn more about the possible evil facilitators of the Seattle zombie outbreak—and the possibility of zombie events in other parts of the country as well. In Episode 10, “Mr. Berserk,” written by Dierdre Mangan & Graham Norris and directed by Jason Bloom, Liv (Rose McIver) must deal with the aftermath of her boyfriend’s murder by Blaine (David Anders) while experiencing the brain of an alcoholic investigative reporter. Ravi gets a few steps closer to finally telling Major (Robert Buckley) the truth about Seattle’s zombie infestation, and the Seattle PD brass falls under further suspicion by those in the know about Team Z.

The show opens with Liv being interrogated immediately following boyfriend Lowell’s violent demise. The non-zombie cops on the force are still investigating suspicious deaths, as they should, but with a zombie police chief, cases like those of Lowell’s are quickly closed up and considered non-criminal. In the case of Lowell’s death by point-blank gunshot wound to the head, Lieutenant Suzuki (Hiro Kanagawa) calls off Liv’s interrogation, saying that it was a suicide. He’s aware that both the victim and his suspect-girlfriend Liv are/were on Team Z, so further investigation needs to be discouraged. 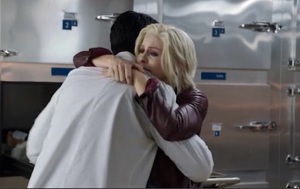 These events also introduce a few new moral dilemmas for Ravi (Rahul Kohli). He has a dead zombie in his morgue, and although as a medical examiner it is clear to him that this was not a suicide, saying so in his official report could have disastrous consequences. What if Blaine gets arrested? Locking up a zombie, especially one who seems to be singlehandedly responsible for a large number of the current infections, seems like a really bad idea. And Lowell’s body is technically a biohazard. Signing off on the suicide theory would allow the corpse to be destroyed, and would help keep the prisons of Washington State free from hordes of newly created brain-eaters.

But Liv needs to sign off on the paperwork too, and this is her boyfriend we’re talking about. Having witnessed the murder, which in truth she could have prevented, her mental state is far from a good place right now. And it isn’t improved by her brains-of-the-week: a reporter, Rebecca Hinton, hot on the case of the Max Rager conspiracy. She’s the same reporter, in fact, that got Major beaten up by exposing the police department’s lack of interest in dozens of missing kid cases. Hinton was supposedly killed in a break-in gone wrong, but her investigations were getting too close to the truth, so it is likely the burglary was more than a random crime. 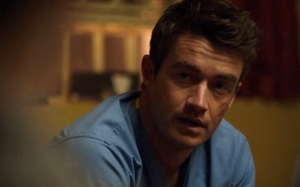 What to do about Lowell’s body is only half of what Ravi has to deal with this week. He is sent by Babineaux (Malcolm Goodwin) to go talk to his roomie, Major, who thinks he’s going crazy. He shot someone three times in the chest, and the next day the guy was pumping iron at the gym. As an ex-social worker, Major knows what his own advice would be to someone telling him such a crazy story: get professional help. He is going to admit himself to a psychiatric hospital to address what he thinks must be either delusions or hallucinations. Ravi knows it’s time to tell him the truth, but Liv won’t agree. Based on Major’s rash actions while trying to unravel the mystery of what really happened to the shelter kids makes Liv think that throwing a zombie outbreak into the mix will only make things worse. Again, though, she’s hardly thinking straight this week. Although they agree not to tell Major the truth yet, Liv and Ravi aren’t the only people around who know about zombies—and at least one of those people is in Major’s psych support group. We wonder how long it will take Major to realize why Liv really broke up with him, and suddenly became ashen, white-haired and weird—not to mention that she left her hospital job for the ME’s office. 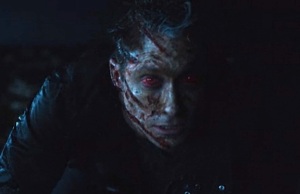 The zombie-Max Rager energy drink connection grows stronger with Liv’s decoding of dead reporter Hinton’s investigation notes. As we learned back in Episode 5, “Flight of the Living Dead,” there would seem to be a connection between drinking Max Rager and going murderously berserk. There have been events similar (though not as big) to those of the Lake Washington Massacre, where Liv was infected, in at least two other cities. Steven Weber guest stars as Vaughn, the slimy chief of the Max Rager corporation. Against Babineaux’s directive, Liv confronts Vaughn, putting herself in the same dangerous position as the dead reporter. A double-crosser posing as Hinton’s source is sent to kill Liv, but in a terrific yacht-based fight scene, she does her zombie best to take him out first. Unfortunately, her attacker, Sebastian Meyer (played by Matthew MacCaull), tastes her blood before Liv “kills” him, and he washes ashore freshly zombified and with a face full of propeller gashes. Ew!

As is often the case, Ravi is the star of this episode. He’s the only person on the show who both has the skinny on the zombie situation and consistently tries to do the right thing. Babineaux means well, but he’s still getting the hang of his new job in Homicide, and doesn’t have all the information. Liv’s mental state is too erratic, with her brains-of-the-week, to ever have a consistent behavior pattern. And Poor Handsome Major is being lied to by his closest friends too often to know what’s truly going on in the wreckage of his life.

We love the quickening pace of iZombie’s story arc. This is turning out to be a great first season.