In Episode 3 of iZombie, “The Exterminator,” a third zombie is discovered, Liv eats some bad brains, and a familiar-looking young tech billionaire is suspected of murder.

Liv had a pretty good time when eating a lusty murdered artist’s brains last week in Episode 2, “Brother, Can You Spare a Brain,” so the batch she tastes today is quite a counterpoint. Although the cadaver came into the morgue as a hit-and-run victim, it turns out he was a sociopathic hit man, and was himself murdered. (There are murders all over the place in this episode.) Instead of taking on emotional traits and feelings, she finds herself with a head full of trivia and a decided lack of empathy—but as with the artist’s brain, there is still a draw to try to extend the experience. The hard lack of emotional connection to other people comes as a relief in some ways. Liv’s zombie resting state must be more of a dull despair than an absence of feeling.

Feeling nothing works for Liv in a few ways—it helps her push Det. Clive Babineaux into pursuing a case that the department considers solved, and when a video of her ex, Major, smooching some new girl over a game of Jenga appears on the internet, she has no reaction. 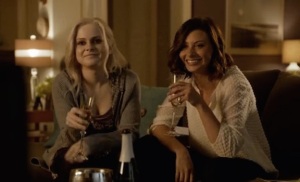 We learn that Liv’s roommate, Peyton Charles (Aly Michalka), is an assistant district attorney. Well that’s an interesting bit of new information! It sort of gives Peyton a raison d’etre, as she’s up until now been a pretty mediocre character. Liv immediately screws up Peyton’s first big murder prosecution (by eating the brain of the guy that actually did it). As so often seems to be the case these days, both the police and the DA’s office have no interest in hearing other theories of a case for which they have some sad sack already in custody.

The case at the center of the story involves the murder of tech giant Wally Walker (Peyton’s case), as well as the murder of Marvin Webster (Liv’s brain-of-the-week), the hit man who did it. Then there’s Don Watts, the smarmy young angel investor behind it all, played by Devon Gummersall (Brian Krakow from My So-Called Life!). It’s a complicated case that ties in to many of Liv’s personal relationships as well. (Oh, and the silly naming theme continues—almost all of the characters involved in the murders seem to share names with former Seattle Sonics.)

There’s a brief appearance by Major, seeking help from Liv with the disappearance of a boy from the halfway house where Major is a counselor. Of course he’s a troubled-youth counselor. Major Lilywhite is the nicest guy on TV since Mister Rogers. Blaine also shows up, mainly just to confirm that Liv doesn’t intend to share her brain supply with him. He is also shown to be the skeezy utopium dealer known to hang out at the local skate park, and probably the reason for the disappearance of Major’s young ward four days earlier.

But the most disturbing reappearance of an earlier character (and the real heart of the story) is that of Marcy, the young former colleague of Liv’s at the hospital, who was the person that invited Liv to the doomed boat party. Turns out she was also zombified that night, but has gone hungry in a hole at the Lake Washington waterfront for the past six months. But for her strand of pearls, she’s unrecognizable—not just due to the change in complexion and hair color from dark to chalky, but for being a full-on shambler. Liv and Ravi find her, and Ravi is excited to collect data for the sake of science—right up until he falls into her pit and is almost eaten. Liv eventually jumps in and puts Marcy down, but not before spending some time passively looking on, due to the social-disorder-afflicted brain she ate. Being devoid of neurotypical feelings of empathy might be more comfortable for Liv than her normal state, but it wreaks havoc on the well-being of those around her. More fun facts we picked up this week:

“The Exterminator” was super Law & Order-y, but still fit in a lot of development of the issues Liv is facing with both the effects of the brains she eats and the dangers of being a hungry zombie. We also see Blaine becoming more of a straight-out antagonist, and both Peyton and Major becoming involved in Liv’s new crime-solving line of work. And Ravi both gains a new (although no longer perambulatory) zombie test subject, and sees Liv’s full-on red-eyed rage state for the first time. There’s not much change in Liv’s relationship with Det. Babineaux, but it looks like next week’s episode might change that. Although this week wasn’t as funny as the first two, the show is keeping up its quality level, and we’ll happily be keeping it on our TV-watching schedule.

A note to those of you who watched this week’s episode on Hulu Plus and are perhaps very confused right about now: For a while, they were mistakenly showing Episode 7(!). Episode 3 is up now.

One thought on “iZombie S01E03 Review: The Exterminator”