A well-dressed yet desperate-looking woman makes her way through dark alleys to find her dealer, who says, “Taylor. What brings you back?”
“My brother’s funeral’s tomorrow,” she replies. She buys two filled syringes and scurries away to shoot up. But before she can, the streetlights around her begin to explode. A hulking figure approaches her, throws her around mercilessly, and then shoots both needles into her chest. As police examine the body, lined with black veins, the woman snaps back to life.

At Jasper’s, John enters and Chas asks him if he remembered the cilantro. “I got tanas root, adder’s tongue, and catnip. So no.” A spool of yarn, the other end somewhere down one of the millhouse’s mysterious corridors, lies beside the scry map in front of Chas.

Chas: Leave it, John. She wants to be alone.
John: Does she, now? 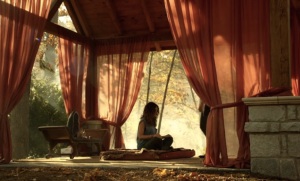 John follows the yarn to a lovely “room” that appears to be a curtained patio in a wooded garden, where Zed sits meditatively on a cushion. “Ariandne’s Thread. Well, at least you took precautions.” Like Theseus and Ariadne, Zed has used the yarn in order to be able to find her way back through the labyrinthine halls of the millhouse. She wants more rest, but John tells her it’s time to get back to work.

Returning to Chas in the great room, John turns to find Chas transformed into Manny. He has come to send John to investigate a suspicious overdose at St. Catherine’s Hospital. Irritated as usual with Manny, John picks up the blood map to look for confirmation, and Manny gets all irritated back and sets the map ablaze, saying it’s a crutch. Well, it was a crutch; now it’s ash. “Invunche, Brujeria, the Serpent himself—we’re off the map now, John!”

The three jump in the cab and head to St. Catherine’s. Chas sticks a huge screwdriver through his leg so they can easily get access to the ER, where the revived but gravely ill woman is. When John says that he and Zed need to get a closer look at Taylor, Chas pulls the screwdriver out of his leg, spraying blood everywhere and sending the medical staff scurrying. Zed approaches Taylor and touches her. A blindingly bright vision of an angel appears to her. Taylor begins coding, sending the OR staff scurrying again—so it takes a moment for them to respond to Zed in the throes of a seizure, just a few feet away in John’s arms.

John watches as Mr. Morris, a huge, angry man with burn scars on his face, enters the ER and starts hassling the staff. He seems to be a regular, as he comes in for skin grafts more frequently than he should need to due to getting in fights all the time. John gives him some serious side-eye.

John and Chas interrupt an orderly having an afternoon nip from a flask in the morgue, and go check out the now-really-dead Taylor’s black-veined remains. A quick incantation fills the room with blinding light and makes her body momentarily have the appearance of charcoal, telling John that all the human spark has left her and all that’s left is a lump of evil.

After a CAT scan, Zed is once again in a hospital bed. John wants to avoid seeing her, but Chas shames him into it. Her attractive (and appropriately named) doctor, Thomas Galen, MD (Nick Gehlfuss), is telling her about the mass on her temporal lobe. She’s frightened, and reminds John that even though Dionysis rescued Ariadne, she still ended up dead.

Meanwhile, the drunk orderly we saw earlier, whose name is Duncan, ducks into a supply closet for another drink (his flask must be empty—he keeps an extra fifth of whiskey squirreled away in the closet). A big growly man comes out of the flickering shadows and tears him open as black veins spread across Duncan’s face.

John is outside the hospital having a smoke, and a doctor comes out to bum one. But before he can pass one over, the doctor has turned into Manny. John is infuriated with Manny and demands that he help Zed. He’s feeling guilty for having pushed Zed into exploring her powers when it might have caused a tumor. When Manny doesn’t immediately offer up assistance, John takes matters into his own hands. He drops a vial of air from Hades and crushes it underfoot, which causes the angel to pass out. (“A real stunner, eh? So was the siren I won it from. Now that—that was a weekend to remember.”) While Manny is unconscious, John carves enchantment symbols into his chest. When he awakens, he finds himself trapped in the borrowed human body of the doctor, without his angelic mojo, and cut off from celestial contact. He’s bewildered and alarmed by his powerlessness and by the sensation of wearing a mortal meatsuit for more than a few moments.

Still reeling, Manny helplessly follows John back into the hospital, surprised to see Bob Carroll, anesthesiologist (Robert Pralgo) in his reflection, and forgetting that he is now visible. They follow the telltale signs of flickering lights—dark matter interferes with illumination—to the closet where the body of poor “Drunken Duncan” lies. Dr. Manny pukes from the smell, but John reaches into Duncan’s ripped-open thoracic cavity and sees a glowing purple Heart of Darkness where his human heart should be.

The legend is ancient, but so is Manny:

“A sorcerer amassed an infernal power. Claimed to be a god. Plagues fell, crops withered, children perished. Finally the people cried out to the Heavenly Father, and a shaft of Heavenly light was released. The sorcerer was destroyed, and his dark power hardened into a pure mass—a black diamond of radiant evil.”

The diamond was smashed by an angelic sword into shards, which shards were then washed away in the Great Flood of Genesis. Manny is instructed to go play doctor and look up Duncan and Taylor’s medical records—“See if they have anything else in common besides the fact that they both died here in the bosom of the lovely St. Catherine, all right?”— while John and Chas go back to Jasper’s.

Turns out that amongst the arcana in the millhouse is a nifty puzzle-box with a little glass receptacle inside it containing one of those heart-of-darkness shards. Don’t touch it—it’s evil! John tests it out on Chas, who starts turning black-veined, enraged, and extra strong. John has to poke him with his new cattle prod to get Chas to drop the bit of calcified evil, which pops itself back into its little glass box.

Poor Manny. Events occurred—events involving a nurse with a thing for Dr. Carroll— while he was dutifully collecting the requested medical records. When he meets up with John outside the ER, John can smell the perfume on him. 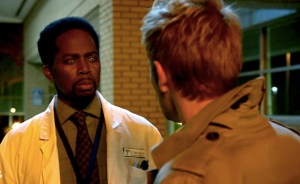 Manny: “This man’s body had all these feelings and I used a woman to extinguish them!”
John: “You mean you made two poor sods feel pleasure—momentary relief from the tragedy of everyday living. Now, that doesn’t sound like a sin to me, mate, but then again, you know, I wasn’t around when they made those rules up.”

John gives the angel some pagan advice from both the Wiccan Rede and Crowley’s Law of Thelema: “Do what thou wilt.” The records show that both victims had major addiction problems and had relapsed. The idea bemuses Manny: “I never understood it when mortals waste a second chance. It makes me angry. It’s—maybe it makes the killer angry.” Hmm. Who around here is angry?

John is still avoiding Zed, so Dr. Manny goes to see her. Young Doctor Galen is there, trying to assure her that brain surgery is the right course of action—he himself has shrapnel from the Iraq War lodged in his chest, and tells her that unlike him, she has the opportunity to have something that might kill her removed from her body. She has a second chance. He leaves her alone with Dr. Manny, and Zed can tell there’s something off. But when he tells her who he is, she’s happy—for some reason Zed is still really into angels, even after evil angel Imogen almost snapped her neck in Episode 7. But Manny’s presence makes her feel better, at least once he clarifies that he hasn’t come to “take” her. She wants to know if her visions are a gift from God or a sign that she’s evil, and is happy to take whatever oblique nonsense Manny spouts as meaning whatever it is she wants to believe.

Big burned Mr. Morris, bane of the ER, lights a smoke right there in the hospital. (Even Constantine at least went outside!) When shooed away by a nurse, he retreats to an ambulance bay, where the lights flicker. John is not far behind. But an even bigger, angrier guy appears and attacks Morris. John tries to save Morris, shouting spells as he approaches, but is knocked out, and Morris is killed. 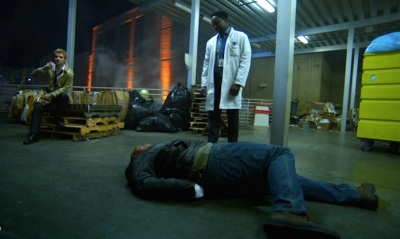 Eventually they realize that Dr. Galen’s Baghdad shrapnel must be a chunk of black diamond—he’s the baddie. The shard’s dark power takes him over when he is angered by people who have been given a second chance and wasted it—and since Zed’s decided to check herself out of the hospital and keep her vision-giving tumor, she’s now one of those people. They confront Dr. Galen in Zed’s room, and he seems to not know what they’re talking about—a piece of black diamond embedded next to his heart? Murder? But when John pulls out Jasper’s shard of black diamond, Galen clutches at his chest, gets all ragey, and runs. Lights all over the hospital begin to flash and burn out. Zed has the angel vision again, and suddenly she knows what has to happen. A great darkness can only be fought with a great light.

The diamond fragment from Jasper’s leads them to Dr. Galen like a magnet. It turns out John can reverse the spell that trapped Manny inside Dr. Carroll, and he does so. Manny is gone, and only a terrified anesthesiologist is left. Dr. Galen’s Mr. Hyde is approaching—they are now all locked together inside the hospital’s records rooms. John throws the black diamond box at him to no effect. But before John and Zed can be attacked, Manny returns. Back in his angel form, he spreads his massive wings and envelops the doctor, guiding his soul into the light. Doctor Galen disappears, leaving nothing but shards of black diamond, which obediently jump into the little glass box to join Jasper’s shard.

John finds Zed later, at church. He attempts to explain his inability to be a comfort to her while she was in need. Manny shows up—but now Zed can see him. John lights a smoke with an altar candle and leaves Zed to find solace in the enigmatic platitudes of her new angel friend.

One more episode to go. It’s hard to imagine that much more will be decided in the fight against the Brujeria and the Rising Darkness this season, but a previous character of interest or two should show up for the finale, at least. We love the cinematography and settings of this show. We love the strange, small details (like throwing “tanas root” into John’s shopping list—a fictional magical herb from Rosemary’s Baby—and the multiple references to ancient Greece). And we love John Constantine. We’ll light a candle against the darkness for him. 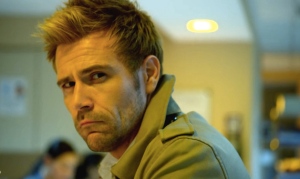 This is John’s “Fretting about Zed” face. We see it a lot in this episode.

Angels and ministers of grace defend us!
Be thou a spirit of health or goblin damn’d,
Bring with thee airs from heaven or blasts from hell,
Be thy intents wicked or charitable,
Thou comest in such a questionable shape
That I will speak to thee …
—Hamlet, Act I, Scene IV

One thought on “Constantine S01E12 Recap: Angels and Ministers of Grace”