The Ironborn arrive at King’s Landing

Game of Thrones returns with the Season 7 premiere “Dragonstone.” Winter is here, and yet the spokes on the wheel keep spinning. “Dragonstone” gives us everything we love about Game of Thrones—power struggles, family conflicts, revenge, and supernatural terror.In Game of Thrones, multiple stories are woven together, all heading towards a known end. Each episode weaves these stories into a complicated tapestry, and each season builds towards that end. When each season begins, showrunners David Benioff and D.B. Weiss must draw up a way to thread together these stories. Each character and story narrative needs to be heading in the right direction at the right time, which is no easy feat in a show with numerous major plot threads, dozens of fictional locations, and hundreds of characters.

The first episode or two in a given season of Game of Thrones can leave us overly aware that the pieces are being laid out in preparation for what’s to come. Yet, “Dragonstone” manages to keep us firmly in the moment with the kind of drama you don’t expect so early in the season. It’s clear there’s some place-setting being done in terms of building conflicts, but the quality of the stories make this a very well constructed hour of television.

Game of Thrones opens with a bang. What initially looks like a flashback to a post-Red Wedding celebration turns out to be Arya Stark (Maisie Williams) using her Faceless Man talents to annihilate House Frey. Actor David Bradley does an impressive job playing Arya Stark pretending to be Walder Frey. The entire monologue, from start to finish, is well written and skillfully delivered. After removing the face of Walder Frey, Arya tells the serving girl:

“When people ask you what happened here, tell them the North remembers. Tell them winter came for House Frey.”

While Arya has returned to Westeros, Bran Stark (Issac Hempstead-Wright) and Meera Reed (Ellie Kendrick) have made their way to the Wall. Bran has had a vision of the Night King and his army of the dead. He tells Lord Commander Eddison Tollett (Ben Crompton), “He’s coming for us. For all of us.”

Bran’s arrival at Castle Black gives us closure around his journey north, but leaves us anticipating what’s to come. We’re eager for more Stark family reunions (especially since the current one isn’t going so great). We’re hoping they will reunite soon, since Bran knows the secret of Jon Snow’s true identity and “BTW, you’re a Targaryen” isn’t the kind of message you want to send by raven.

At Winterfell, Jon Snow (Kit Harington), Sansa Stark (Sophie Turner), and Davos Seaworth (Liam Cunningham) meet with the Lords and Ladies of the North. As the new “King of the North,” Jon is implementing a progressive agenda that includes sending the Free Folk to man Eastwatch-by-the-Sea and training the women of the North to fight. When Robett Glover (Tim McInnerny) protests about the ladies taking arms, Lyanna Mormont (Bella Ramsey) quickly puts him to shame. Sansa tries to get in on the action by demanding that castles belonging to the Umbers and Karstarks, who sided with Ramsay Bolton, be given to more loyal families. She seems to have the support of some in the crowd. But Jon doesn’t want to take away the ancestral homes of these families. Sansa complains, “So there’s no punishment for treason and no reward for loyalty?” Jon stands fast, telling the Northern Lords, “I will not punish a son for his father’s sins.” When he asks young Ned Umber and Alice Karstark to pledge loyalty to House Stark, he tells them, “Yesterday’s wars don’t matter anymore. The north needs to band together. All the living North.” He seems to have their support. Let’s hope that lasts.

While Sansa is trying to put the political strategies she has observed into practice, Jon is thinking of the bigger picture of fighting a war that could end life as they know it in Westeros. Sansa is thinking politically while Jon is focused on military strategy. She tells him, “You have to be smarter than Father. You need to be smarter than Robb. I loved them, I miss them, but they made stupid mistakes and they both lost their heads for it.” If only she could find a way to help Jon without resorting to making frustrated faces at Littlefinger (Aidan Gillen), who couldn’t be more pleased by the conflict between Jon and Sansa. When Sansa doesn’t get her way, she seems to fall back into the spoiled Season 1 Sansa, but a much more cynical and secretive version of her former self. Every season we hope that Sansa will become a wise and influential character, but it has yet to happen. Jon sadly points out that Sansa seems to admire Cersei and we can’t help but wonder if that is Sansa’s destiny.

Queen Cersei Baratheon (Lena Headey) has succeeded in having most of her enemies killed. So she’s not pleased when she learns her brother Tyrion is Hand to Queen Daenerys Targaryen. With her children gone, Cersei has nothing left but a desire for power and vengeance against her enemies. Jaime Lannister (Nikolaj Coster-Waldau) warns his sister of the dangers they are facing.

Cersei: “I understand whoever wins could launch a dynasty that could last a thousand years.”
Jaime: “A dynasty for whom? Our children are dead. We’re the last of us.”
Cersei: “A dynasty for us, then.”

Will Cersei fall to the same fate the as the mad king, focused on murdering anyone in the way? Will Jaime find himself again having to choose between loyalty and morality? 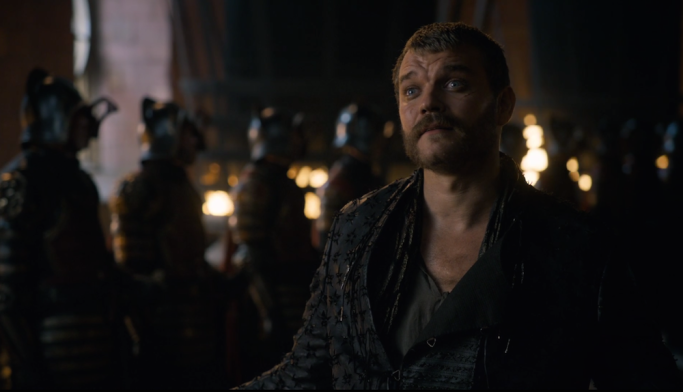 Cersei has invited Euron Greyjoy (Pilou Asbæk), the new “King” of the Iron Islands, to court. He arrives on a fleet of amazing black and yellow ships with a Kraken figurehead wrapped around the bow. Euron shows up with an offer: “Since it appears that all our treasonous family members are fighting for the same side, I thought we rightful monarchs could murder them together.” He wants to marry Cersei, offering her a thousand ships and two good hands. She declines, but he intends to return with a gift to win her over. Asbæk plays Euron with a rock-star swagger you can’t look away from. Is Cersei as intrigued by this bad boy as we are?

Samwell Tarly (John Bradley-West) is studying to become a Maester at the Citadel, which comprises shelving books, cleaning chamber pots, serving stew, and occasionally assisting autopsies. We get a hilarious sequence showing the sickening repetition of Sam’s days at the Citadel. Sam talks to Archmaester Marwyn (Jim Broadbent) about the army of the dead, and the Archmaester surprisingly believes him. He still doesn’t give Sam access to the restricted section of the library, because people always lament it’s the end, but “The wall has stood through it all. And every winter that ever came has ended.” So Sam has to resort to stealing the keys. Sam learns that Dragonstone is made of dragonglass, which could come in handy in the coming war. Despite the unpleasant tasks he’s assigned, it seems that Sam has the opportunity to spend time with Gilly and Little Sam, which seems like a pretty good life for a Maester-in-training.

We also learn that the grayscale-infected Jorah Mormont has somehow ended up in a cell at the Citadel. He waits for the arrival of Daenerys Targaryen.

The Kindness of Strangers

Arya comes upon a group of Lannister soldiers (including one played by musician Ed Sheeran) who offer to share their meal with her. We learn that Arya is continuing on her vengeance tour when she tells them she plans to kill the Queen. The soldiers all assume she’s joking. But what’s most interesting about this scene is the exploration of the common people caught in the middle of power struggles. Well, they aren’t exactly common folk, because they are soldiers who participate in the violence of war. Even so, they are ordinary men who miss their families. They’re also kind enough to offer Arya some food and drink. It’s a refreshing change, since most of the nameless soldiers we’ve met on the road have been self-serving and violent. 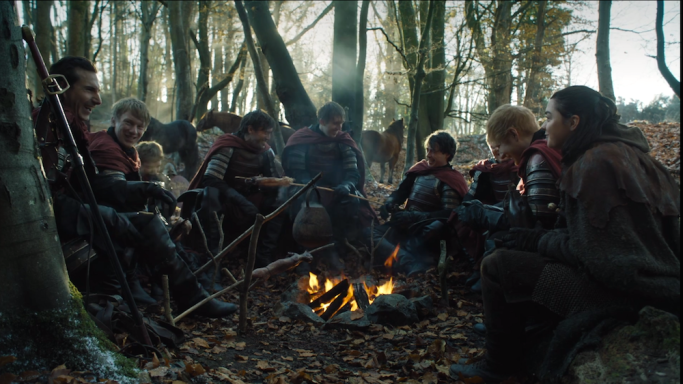 We’re also reminded of the struggles of the general populace in Westeros when Sandor Clegane, now traveling with the Brotherhood Without Banners, comes upon the house of the farmer he stole from in Season 4. Sandor had rationalized his theft, telling Arya that the man and his daughter weren’t going to survive the winter. He is not the same man he was, and finding these two dead leaves him full of sadness and remorse. Sandor Clegane has changed in other ways. When Thoros of Myr bids him to look into the flames, Sandor sees the army of the dead marching into what sounds like Eastwatch-by-the-Sea.

In a beautifully filmed scene, Daenerys Targaryen (Emilia Clarke) returns to her ancestral home, Dragonstone. Though we kept wondering if someone was going to jump out from behind a stone dragon and try to assassinate her, it was a fascinating journey watching Daenerys as she moved through each room. We also kept wondering where everyone was. Sure, Stannis got his whole family killed, but what about the staff? The members of Daenerys’s party gave her the room and the quiet to fully experience her homecoming. The swelling music that plays as Daenerys walks through Dragonstone adds to the emotion of the moment. When they arrive in the map room, she turns to Tyrion to say, “Shall we begin?”

“Dragonstone” was cinematically breathtaking—some of the incredible images, both filmed and CGI, included the eerie sight of the army of the dead, the sun shining through the trees in the Riverlands, the incredible Ironborn ships sailing across the sea, and the arial and interior shots of Dragonstone. Game of Thrones continues to surpass its previous achievements with the artful beauty of every shot. Writers Benioff and Weiss and Director Jeremy Podeswa knew when to use silence to let a moment speak for itself.

Game of Thrones gave us many big moments to enjoy in the “Dragonstone,” but our favorite small moment was Tormund Giantsbane’s adoration of Brienne of Tarth. The story offered conflicts large and small, while also providing new perspectives. The tension between the Stark siblings was echoed by the tension between the Lannister siblings. We got a new and improved Euron Greyjoy who veers carelessly between flattery and insults. “Dragonstone” started with the destruction of House Frey and ended with a homecoming for House Targaryen. Game of Thrones sets the standard high with the Season 7 premiere “Dragonstone.”