Game of Thrones gives us a vast world full of multiple storylines, scores of characters, and different locations.“Book of the Stranger” gives us a new sampling of that world, as we get every week for ten weeks a year. Some of the samples offered are delicious treats we can’t get enough of, while others we consider with mild indifference—and then there are those that make us feel a little sick. At the next serving, we might get excited about something fantastic we experienced before, but when it’s plated up for us again they’ve changed the recipe, often with mixed results. In “Book of the Stranger” we’re reminded that although something on Game of Thrones may not have agreed with us in the past, the next time it’s served to us we might find it delectable.

So let’s start with dessert. Daenerys Targaryen (Emilia Clarke) is back and better than ever. The last scene in “Book of the Stranger” gives us Daenerys emerging from the burning ruin of the Dosh Khaleen Temple, with the entire city of Vaes Dothrak bowing before her. There’s no dragon rescuing the Breaker of Chains; instead the Mother of Dragons kills all those who think they can control her or dictate her fate. She does get a little assistance from Darrio Naharis (Michiel Huisman) and Jorah Mormont (Iain Glen), but she saves herself while converting a city. She also hopes to save those who have suffered at the hands of an abusive system of power in Dothraki culture, such as the widowed Khaleesi Lhazareen.

After getting so many scenes of Daenerys struggling to govern over the last two seasons, we’d lost the taste for her narrative—a character whose story we used to crave. “Book of a Stranger” echoes the Season 1 finale in which Daenerys survives the flames along with three little dragons. This is the old “Kill the Masters” Daenerys, whom we can’t get enough of. Apparently neither can Darrio and Jorah, who manage to be at the right place at the right time, with the right illegal weapon, despite the competition they seem to have between them. Suddenly, we’re on fire about Daenerys once more.

While we’re talking about the samplings we found most delightful in “Book of a Stranger,” let’s savor Castle Black. We’ve always found the story at the Wall consistently full of flavor. And it’s not just because Jon Snow (Kit Harington) makes our mouths water, though good presentation always helps. It’s because like most people, we sympathize with a hero, of which there are very few in Game of Thrones. It also helps that there are some pretty sensational moments in the far North, such as those in “Winter is Coming,” “The Watchers on the Wall” and “Hardhome.”

At the start of “Book of a Stranger” we see Eddison Tollett (Ben Crompton) trying to talk Jon Snow out of leaving Castle Black, reminding him of the danger that lies beyond the wall. Jon is feeling defeated after being murdered by his brothers and tells Edd, “I pledged my life to the Night’s Watch. I gave my life.” 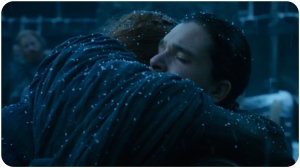 A horn blows and we’re thrilled to see that Sansa Stark (Sophie Turner) has arrived at Castle Black before Jon has departed. Jon and Sansa hugging is one of the best emotional moments we’ve experienced in Game of Thrones. After such a dark Season 5, Game of Thrones has trained us to respond like Reek, fearfully expecting the worst. We were dreading the possibility that Jon and Sansa would miss each other, and seeing Sansa at the gate was a huge relief. We won’t lie—we cried with joy when the two were reunited.

Once alone they reminisce about kidney pie. Sansa apologizes for being so awful to her bastard brother when they were growing up, and Jon acknowledges he might have been a bit sulky. Sansa’s experiences have made her strong, whereas Jon is still struggling with all he’s been through, including having to execute Olly. Jon did die, after all. Sansa wants to retake Winterfell from the Boltons and tells Jon, “If we don’t take back the North we’ll never be safe. I want you to help me, but I’ll do it myself if I have to.”

It’s only when Jon Snow gets a letter from Ramsay Bolton (Iwan Rheon) telling him that he has Rickon, that Jon is inspired to take action. Sansa tells him, “A monster has taken our home and our brother. We have to go back to Winterfell and save them both.” We’re loving Season 6 Sansa Stark. Lest we forget how truly monstrous Ramsay is, just in case his awful ‘come and see’ letter wasn’t enough, we see him brutally murder Osha (Natalia Tena). Ramsay is clearly the villain of the tale, a fascinating and complex villain, outdone only by the supernaturally terrifying Night’s King.

Sure, we’re thrilled by the idea of Jon and Sansa taking back Winterfell and killing Ramsay. Yet it’s the fun B-story at Castle Black that has our attention: Tormund Giantsbane (Kristofer Hivju) is sweet on Brienne of Tarth (Gwendoline Christie). If the way he stares at her while he chews his meat is any indication, the wildling seems to be falling hard for the heir of Evenfall Hall. Now this is a story we can sink our teeth into.

Davos Seaworth (Liam Cunningham) is finally asking Melisandre (Carice van Houten) questions about what happened to Stannis and Shireen. Before Melisandre has to admit she burned Shireen alive in a sacrifice for a battle that Stannis ultimately lost, they’re interrupted by Brienne. Brienne confirms that Stannis’s army was defeated and tells Davos and Melisandre that she executed Stannis. Brienne has had her revenge, but she won’t forgive or forget. Wonder if the Onion Knight will be so restrained when he eventually learns what happened to his young tutor Shireen?

We’ve developed a boredom with the flavors of Meereen, but Tyrion (Peter Dinklage) is starting to spice things up. Tyrion’s negotiations with the Masters of Yunkai and Astapor stirs up anger in Missandei (Nathalie Emmanuel) and Grey Worm (Jacob Anderson).

Tyrion offers the other cities of Slavers’ Bay seven years to end slavery if they stop fomenting rebellion in a free Meereen. Though it’s noteworthy to see Tyrion try to find ways to keep Meereen from falling into chaos and war, the real story here is the response of Grey Worm and Missandei. They too want peace, but have a very different perspective than Tyrion. Grey Worm warns Tyrion about the slavers: “You will not use them. They will use you. That is what they do.” Perhaps they are learning governance from Tyrion, but it might not be the lessons he means to impart.

The scenes in the Iron Islands have been a mixed bag, but the story of the Greyjoys has grown intriguing in Season 6. Theon Greyjoy (Alfie Allen) has returned home to the Iron Islands, but his sister Yara (Gemma Whelan) is still angry that the weak Reek did not return with her when she attempted a rescue. Despite Theon’s crying and pathetic state, Yara is suspicious that he’s arrived on the eve of the Kingsmoot, when the Iron Islands will choose a new ruler. Theon tells Yara, “You should rule the Iron Islands. Let me help you.” Theon may have physically escaped Ramsay, but he isn’t suddenly cured of the trauma he experienced. It seems he may have found a place for himself by Yara’s side. It’s hard to imagine where he could have had any value in Westeros besides helping his sister.

“Book of the Stranger” is the first we’ve seen Petyr “Littlefinger” Baelish (Aidan Gillen) in quite some time. Wonder what he’s been up to. He certainly seems to have cemented the trust of young Lord Robin Arryn (Lino Facioloi). Arryn has been training at Runestone with Lord Yohn Royce (Rupert Vansittart). Yohn is suspicious of Petyr, but Robin’s tendency for impetuous whims prevents him from taking action. With Petyr’s influence, Robin decides that the Vale armies will go north to help his cousin Sansa. Why would Petyr marry Sansa off and then use the Vale armies to intervene in the north? Littlefinger is definitely a mystery. This little bite of the Eyrie is all we needed to keep us going.

To be honest, King’s Landing keeps giving us dishes we’ve lost our taste for. The High Sparrow is played so well by Jonathan Pryce, but he seems to keep getting the same scenes again and again. Cersei Lannister (Lena Headey) plans and plots, her children disappoint her, and everyone except her brother Jaime (Nikolaj Coster-Waldau) disdains her. Sure, Cersei and Jaime have made a truce with Olenna Tyrell (Diana Rigg) and their uncle Kevan Lannister (Ian Gelder) to defeat the High Sparrow and protect Queen Margaery Tyrell (Natalie Dormer). Yet we’re still waiting for something we really care about to happen here. We haven’t had much zest for King’s Landing since Tyrion was the Hand in Season 2.

“Book of the Stranger” Review 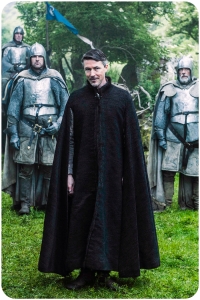 Each week, Game of Thrones seems to go by faster. Either Sansa’s wish for time travel has come true, or the writers have found a way to move along the various components of the story in a way that keeps us immersed. “Book of the Stranger” gave us a mix of joy, horror, and intrigue, watered down with just a touch of boredom from King’s Landing. We look forward to coming back for more.

3 thoughts on “Game of Thrones S06E04 Review: Book of the Stranger”