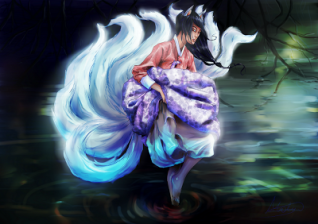 The Kumiho has the supernatural ability of transforming into a human—usually a beautiful woman. Though able to shape-shift, there is still something quintessentially fox-like about a Kumiho, even in human form. A Kumiho in human form might have foxy features, pointed ears hidden beneath flowing locks, or nine tails that only become evident when a wedding dress is removed. Though able to change between human and fox forms, a Kumiho carefully guards its true identity.

Anyone for some liver?
Image: Kumiho by skorpikore at Deviant Art.

Though ancient tales of the Kumiho indicate they could sometimes be helpful to humans, in modern times Kumiho are known to be evil, bloodthirsty creatures that eat human livers or hearts. The Kumiho tricks unsuspecting people in order to consume their hearts by taking the form of a human. They can sometimes be found in graveyards, where they feast on the hearts of the recently dead. In other accounts, Kumiho must consume human livers in order to attain the life force or energy of the human. The fairy tale The Fox Sister depicts a fox spirit preying on a family for livers.

Kumiho are able to transform into humans, most often beautiful women.
Image: Summer Lights Conversation by wanderingkotka at Deviant Art.

The Kumiho is bound by supernatural forces, living a life connected to humanity yet outside the human realm. Like werewolves and other shape-shifters, the Kumiho’s existence is the envy of some, but a curse to the creature. Humans and foxes alike believe that humanity is a preferable state. In Buddhism, part of the karmic ladder with which souls migrate according to spiritual merit, humans are at the summit. It’s believed that with great will a Kumiho can ascend from its yokwe (monster) state, becoming permanently human and shedding its evil disposition. Ways in which a Kumiho can become human include:

The Kumiho appears in ancient Korean folktales, but stories of this yokwe fox are abundant in popular culture, particularly in Korean television drama.

If you’re interested in learning more about the Kumiho through traditional Korean folktales, check out The Salt Peddler and The White Fox, as well as The Fox Sister. These stories have traditionally been shared with the young, but as with many old fables, they are much spookier and a bit more gruesome than our modern fairy tales. 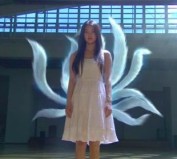 My Girlfriend is a Gumiho gave the Korean fox new life.

10 thoughts on “Monster of the Week: Kumiho”